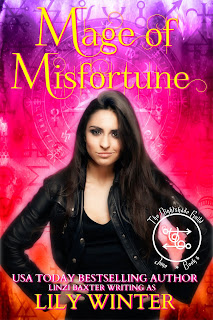 When Luna Graves finally has the Elven Princess, she thinks she’s ready. Sure, her magic is still on the fritz and her boss is attempting to call her into work even though he approved her time off, but that’s beside the point. This is her time with the Princess and she intends to make the most of it. Until Devin tracks her down to her home and demands she come in no matter what. There’s a murderer on the loose targeting psychics and Luna is the only person he trusts. Luna knows she has to protect the princess so she finds a way to compromise, and quickly.

The last thing Devin Rogan expects is Luna walking into work with a toddler on her hip and a cat with a crooked tail at her feet, but he’ll take what he can get. A third body has turned up in just as many days, and if he can’t put away the serial killer, the small town of Cassadaga is going to have his head. Just because he doesn’t believe in magic doesn’t mean others don’t.

With Luna’s hacker skills and Devin’s no-nonsense approach, he thinks they’ll book the murderer by the end of the week. But as they dive deeper into the investigation, they realize there’s a deadly pattern with each murder that complicates things. The murderer questioned the psychics about a specific target every time, and when they were unable to provide information, they wound up dead. Now, Devin and Luna must figure out who this mysterious target is and why they’re worth killing over. They have to put their differences aside if they’re going to solve the crime and protect the Princess from outside forces before the murderer can attack again and this mysterious target is taken out for good.