Kat Turner kicks off the Halloween weekend of 31 Days of Magic & Mayhem! 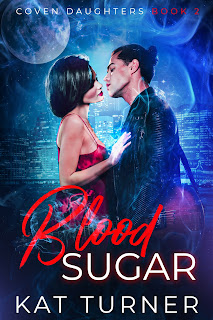 October 1st is the official start of spooky season! We're huge Halloween fans, so anything goes, from scary to cute and everything in between. By the time late October rolls around, our place looks like a haunted house.

We watch one scary movie or television show episode every day from October 1st to October 31st-Hallo-screen!

My husband grew up across the street from a cemetery. One night we were walking through the grounds (as one does!) and both witnessed tubes of light slinking around on the grass near a new burial site. They moved slowly and carefully, as if with sentience and intention, making them difficult to explain as ignes fatui.

Who can say for certain what lurks behind the veil? I've always felt that some of these mysterious entities are looking out for us. Others, not so much.

Eve Conley-Adyemi, a clairsentient mortician being stalked by an angry spirit, is no stranger to supernatural drama. But when a vampire rock star shows up on her front porch begging her to end his undead existence, she gives him a hard pass. Besides, her death magic doesn't work that way.

Soon, the sensitive rocker named Jonnie Tollens wins Eve's interest, and they team up to defeat her poltergeist and cure his vampirism. Their quest leads them to a supernatural expat community in Peru who might have solutions, unlocking dark, potent facets of her powers along the way.

As they fall for each other, they lose control of the exact forces they need to harness. Worse, a marathon research session uncovers terrifying facts on who is really pulling the magical strings.

Can Eve and Jonnie fix their broken lives together before a rising tide of dark magic engulfs them both?