Love the mood of today’s guest, Elle Wren Burke. Despite writing about paranormal activities, Elle’s not sure how she’d tackle an encounter. 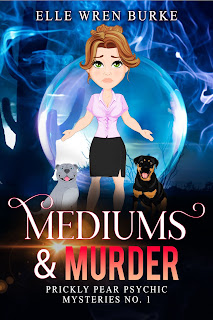 Close to Halloween! We don't do too much in terms of Halloween decorations. I like to save up all my energy for costumes! Unless we're having a party, then it is game on and I'm pulling out all the stops. Our only rule is that decorations need to be easy to put up, take down, and store (totally lame, I know).

I love dressing up! Halloween is a time for us to be free and have fun. We get the opportunity to become someone else, which I love. As a writer, I get to put myself in someone else's shoes all day, but on Halloween I can dress and act like them too ;). My most favorite costume from recent years was Wednesday Addams.

I haven't! If I ever do, I'll definitely have to integrate it into a book plotline. I'm not sure I could handle it to be honest, I'm pretty jumpy! I love writing about my character's psychic visions, but if I ever had one, I might have a heart attack.

Definitely my dog. She gets into some things during her nightly inspection of our house! Other than her, our own minds! I used to imagine so many things happening in my house at night when I was a kid. I was always so scared of something. I still let my imagination run wild every once in awhile!

Alara has no interest in using her psychic abilities, but when her friend turns up dead, everything changes.

Alara Beatty leads a normal, boring life—even though she's psychic. Living in the small town of Prickly Pear in the Southwest, Alara is an accountant by day and a dog mom by night. Convinced her psychic abilities are too scary to handle, she pushes them down as much as possible. But when a close coworker turns up dead at Alara's workplace with a knife in her chest, Alara must decide whether to use her gifts to find the murderer.

Just in time, her new Aunt Irene has arrived in Prickly Pear to connect Alara with the biological family she has never known. Irene has brought a stunning revelation with her—Alara is not alone in her abilities. Her entire family is psychic, though it looks like Alara might be more powerful than them all.

Also back in town is Alara’s hunky old friend and police officer Rudi Rivera. Alara and Rudi have always had a fun, humorous relationship, but now that they’re both single, could something more be developing?

A lot is changing fast for Alara, but will she accept her aunt's help to tap into her powers as a medium to solve the murder? Or will Alara run from the family who abandoned her and the gifts they passed down to her?

Mediums & Murder is the first book in a new paranormal cozy mystery series filled with humorous adventures, psychic sleuthing, and a dash of romance