It's been a few months since I've been in bed with My Sexy Saturday, which is naughty-speak for taking part! This week, I'm featuring my new EC for Men Quickie, Twin Cities. It's a M/F/F ménage that'll warm up those cold nights!

He took her mouth, flicking his tongue over her bottom lip until she opened, letting him in. She leaned over him. He reached under her skirt, cupping her ass, and pulled her on top of him. Her sweet, nubile skin felt so soft beneath his hands.

It didn’t take much persuasion, and she’d straddled his lap, her denim skirt riding up. He pressed his cock against the heat between her legs. How easy it would be to take her fast right here.

Available via Amazon, ARe, Ellora’s Cave and other eRetailers.

Make sure to visit the other Sexy contributors!

Posted by Louisa Bacio at 12:38 AM No comments:

A Walk in the Sand -- Sci-fi/Fantasy 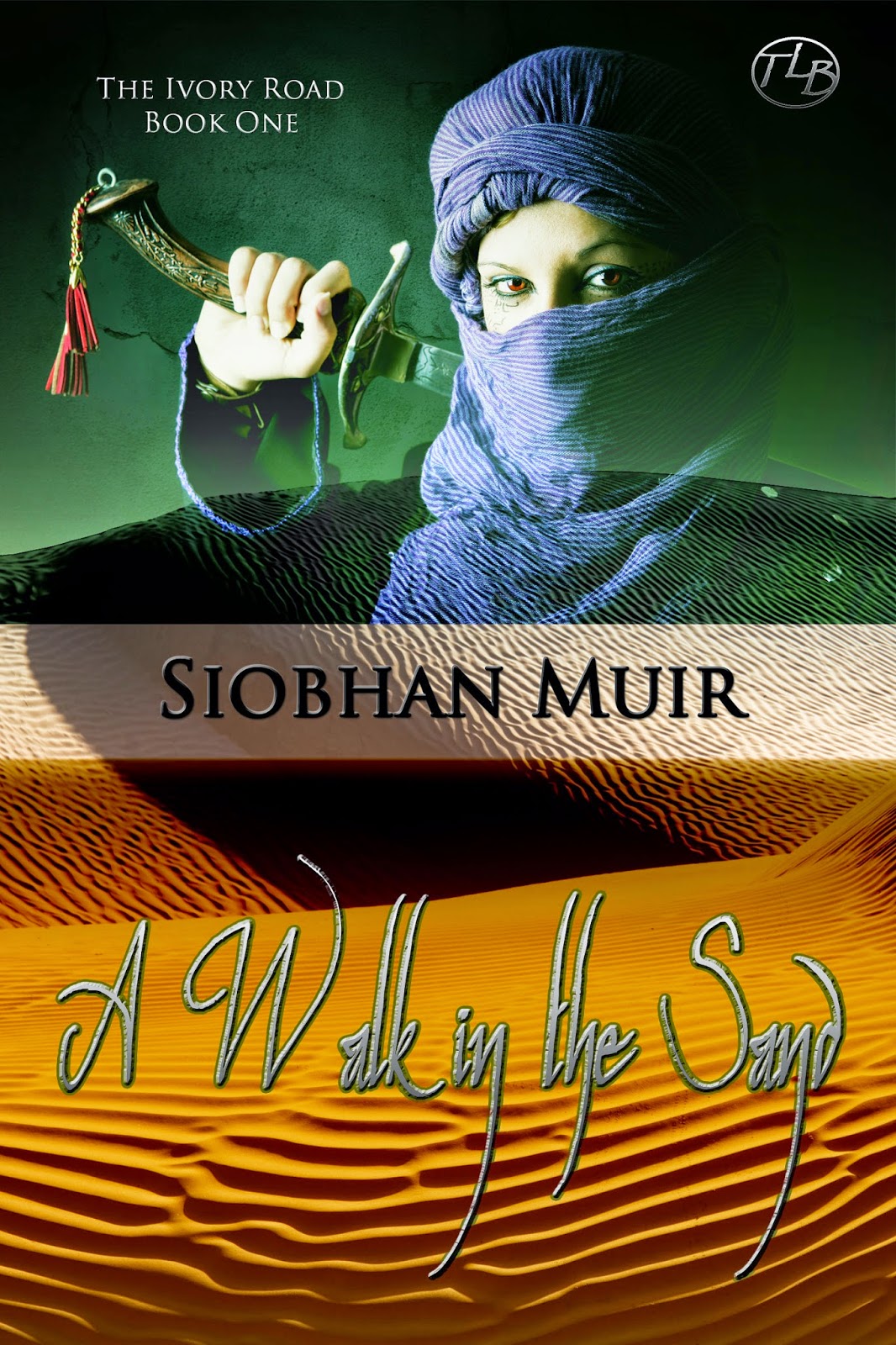 Please welcome a special guest today -- Siobhan Muir, and a taste of her new release A Walk in the Sand.

When it comes to make believe, A-list actress Ivory is a professional. But when a desert hike takes her across a dimensional rift, her real-life self, Iliana Rory, must separate fantasy from reality. The man she swears is the costar in her next movie might share the same surname and appearance, but there are no sets in this Mr. Crowe’s world, no props, and no director to yell “cut” before blood is spilled.

With a fortune in stolen treasure and the forces of the Knalish army hot on their trail, Brandon Crowe and his partner, Ahmad, must cross a desert neither of them knows well. Mistaken for their guide, Iliana seizes any chance to stay ahead of the army and survive in this new world.

Adventure straight out of a Hollywood blockbuster might be on Iliana’s bucket-list, but she never dreamed there’d be the real possibility of death when the end credits roll. A Walk in the Sand is the first story in the four part serial recounting Iliana’s journey along the Ivory Road.

The Ivory Road: A Walk in the Sand
Copyright © 2015 Siobhan Muir
All Rights Reserved

“You're not going to stop playing, are you, Mr. Crowe?” Iliana shook her head. “Fine. Play your little game, but I’m done. I don't need this and I'm outta here.” She swung onto the gray horse and settled her weight in the stirrup-less saddle. She turned the animal’s head toward a gap in the trees and urged the horse into a trot.
“By all the Gods!” he shouted in frustration at her back.
“I told you women were faithless.”
Ahmad’s voice made her fury burn brighter, but she’d dealt with trolls in Hollywood. This guy was only a run-of-the-mill heckler. The gray horse lengthened its strides as they passed the edge of the oasis, and she did her best to ignore the corpse, still lying in the glaring sun. If it really is a dead body and not a dummy.
She stopped the horse and tried to decide which way to go. All directions looked pretty much the same. Well done, now you’re out here alone with no idea which direction is west. At least she now had a horse. Iliana glanced down to the sand below to try to determine which way their shadow pointed. She frowned. Had she gotten here in the morning or afternoon?
“I don’t think he’s accustomed to being spoken to like that.”
She froze and looked around. No one stood near her. She sat alone on the horse.
The horse huffed an indignant sigh and turned his head to eye her.
Iliana swallowed hard. “Did you say something?”
“Yes, I said, I don't think he’s accustomed to being spoken to like that.”
The voice echoed in her ears, but the horse’s lips had remained still. That’s it. I’ve gotten sunstroke. “I’m going crazy.”
“That remains to be seen, but we’re still having this conversation anyway.” The gray snorted and tossed his head.
“Is this some sort of cosmic joke? Horses can’t talk.” She snapped her mouth shut and shook her head. “And now I’m arguing with an animal.”
“Only because you can’t seem to accept I can speak, and well enough for you to understand, young lady.”
Iliana scrubbed her hands over her face. “No, no, no. This isn’t possible. There is no magic in the world except what Hollywood conjures. I must be dreaming this. I’m on a solo hike in New Mexico, minding my own business. This is just a dream from sun-stroke…” She glanced around uncertainly. “Except the sand is golden and Taggart Crowe has shown up.”
“The man you left behind is named Brandon Crowe and you’re in the Karobis Desert, which is in the country of Knalland.” The horse stretched a leg forward and rubbed the side of his muzzle against his knee. “The continent on which this desert stretches is called Absentia.”
“Are you part of the script, too? When did this become a fantasy story?”
The horse snorted. “What makes you think you’re in your desert? Have you seen any equipment from your home world? Have you seen any people beyond Crowe’s raiders?”
Her stomach sank, but she rallied gamely. “And I suppose the planet has a completely different name as well?”
“Actually, in this world the planet is called Earth.”
“No. No way. I so don’t need this right now.” She pinched her thigh, but the world around didn’t change. “I know I didn't do the best in school, but I did pay attention a little. There’s no such thing as other worlds. That’s a science fiction thing. And talking horses are straight out of fantasy novels. I must have lost my mind.”
“Not in the least.” The horse sounded amused as he carried her toward the top of a dune. “I think you just need to expand your perspective. ‘There is more to heaven and earth than is dreamt of in your philosophy,’ Iliana.”
She snorted. “Did you just quote Shakespeare to me?”
“The Bard is famous in all the worlds I know because he understood there are different universes and dimensions.” The horse grunted as the dune steepened. “This one is different enough to allow for talking horses, but similar enough to keep the same planet name.”
“A different dimension.” Iliana rubbed her face again. “Come on, where are we, the Twilight Zone? This only happens in stories, but reality is quite different. First of all, how did I get here? And who is Kyra? Why does Crowe think I'm her?”
“You must have been in the right place at the right time when the dimensions shifted.”
“Shifted.”
“Yes. When they shift, they rub against each other a little like sandpaper, and can wear a hole in each other. At least enough to let beings sift through.” The horse nodded his head as he climbed. “As for Kyra, do you recall the body we passed earlier?”
“Yeah.” She swallowed against the cold feeling in her stomach. “Why?”
“That was the person Crowe talked about.”
“But the body looked male. It was a dead guy, right?”
“Yes, his name was Kyram Tortenson.”
“Then why did Crowe say he was looking for a woman if that was Kyra?”
“Because Kyram never pronounced the “M” on the end of his name, never grew a beard, and had effeminate airs. He also never corrected Crowe.”
“Did you talk to Kyram, too? I mean, I assume you were his horse.”
“You know what’s said about assumptions.”
Iliana resisted the urge to slam her heels into the horse’s side. “Did you talk to him or not?”
“No.”
“So why are you talking to me?”
“You’re prettier?”
She groaned and secured the veil across her mouth and nose when the wind came up. They crested the dune and paused, taking in the vista of unending sand. Damn. How the heck am I going to get home?

Siobhan Muir lives in Cheyenne, Wyoming, with her husband, two daughters, and a vegetarian cat she swears is a shape-shifter, though he's never shifted when she can see him. When not writing, she can be found looking down a microscope at fossil fox teeth, pursuing her other love, paleontology. An avid reader of science fiction/fantasy, her husband gave her a paranormal romance for Christmas one year, and she was hooked for good.

In previous lives, Siobhan has been an actor at the Colorado Renaissance Festival, a field geologist in the Aleutian Islands, and restored inter-planetary imagery at the USGS. She’s hiked to the top of Mount St. Helens and to the bottom of Meteor Crater.

Siobhan writes kick-ass adventure with hot sex for men and women to enjoy. She believes in happily ever after, redemption, and communication, all of which you will find in her paranormal romance stories.

Siobhan’s latest release, A Walk in the Sand, is the first story in her new The Ivory Road serial. She has published A Hell Hound’s Fire (a free read), The Beltane Witch, and Cloudburst Ice Magic in the Cloudburst Colorado series, and Take the Reins and A Centaur’s Solstice Wish in the Rifts series. Siobhan has also published Bronco’s Rough Ride and The Navy’s Ghost in the Bad Boys of Beta Squad series, Not a Dragon’s Standard Virgin and Queen Bitch of the Callowwood Pack through Siren Publishing, and Her Devoted Vampire through Evernight Publishing.
Posted by Louisa Bacio at 1:32 AM 1 comment: