What happens when the magic goes away? 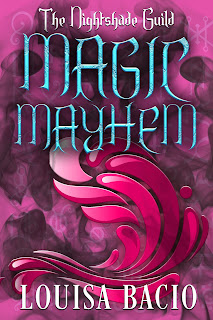 Through waves of chaos, can love surface?

As Sea Mage of The Nightshade Guild, Serena Moon lives on the line between land and water. But when magic goes awry, mayhem follows.

All she thinks she knows comes crumbling apart when Serena can no longer control her shift between human to mermaid form, leaving her stuck in mystical limbo.

As king of the sea dragons, Peder wars between the desire to fix everything and the realization there's things he cannot. He craves time with Serena but refuses to use force.

With the continuous onslaught of unseen forces trying to destroy them, Serena and Peder learn to rely not on their magic, but themselves...and each other. 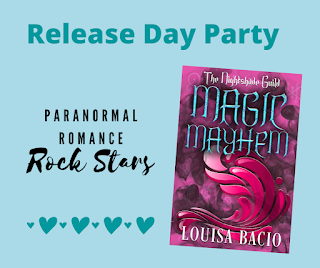 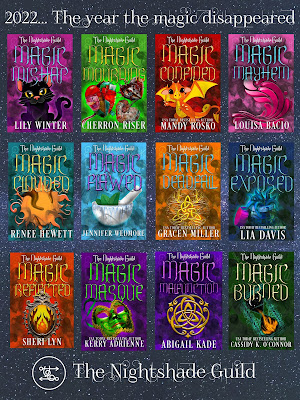 Check out the complete multi-author series on Amazon.

Posted by Louisa Bacio at 6:00 AM No comments:

Finally Home: What does Spider-Man & Billie Eilish have in common?

For someone who considers herself an introvert, and often prefers time alone than being in a large crowd, there’s nothing like the amazing exhilaration of a positive shared experience.

On Wednesday, April 6, 2022, I saw my first large arena concert, Billie Eilish, since before March 2020. At one point, I worked as a music journalist, and attended upward of three shows a week. Live music fuels the soul. That feeling of the reverberations vibrating through the body cannot be captured elsewhere.

I attended the show with my 15-year-old and two of her friends. The tickets had been bought during the period when we’d been home way too long, and I longed to get out—again. Fortunately, Ticketmaster now offers a kinda “layaway” plan with Klarma and I didn’t have to feel guilty about shelling out $500 in concert tickets. It broke down into much-more manageable payments.

A energetic opener by Duckwrth set the stage for the evening. It proved to be “SuperGood.” Ironically enough, Duckwrth also is known for the single “Start a Riot,” which was featured in Spider-Man: Into the Spiderverse. (It all connects …).

Eilish played a combo of older and newer work. Some of the best moments came while watching the interaction between Eilish and her brother/collaborator Finneas O’Connell. At one moment, she highlighted their “Oscar-winning” track “No Time to Die.”

And I realize that teenagers know the lyrics much better than me. Today, I asked Alexa to play Billie Eilish, and I was happy to see the lyrics scroll across the screen.

The first time since the pandemic started I felt this sense of connection with others was opening night of Spider-Man: No Way Home. Excitement filled the air. The theater was packed, like I hadn’t seen it for years.

Now, if you haven’t seen it – spoilers ahead – but it’s been out for a LONG time, and these are no longer hidden. But OMG, seeing the three lead actors on screen at the same time – the audience cheered!

We were in this together.

Eilish talks about environmental conservation, equity and protection of others. She seemed to really “see” the crowd in the far back and high-up areas. Unlike others who may not act upon it, she offered a major surprise for the audience: A second stage on the other side of the arena.

What were originally our nose-bleed seats became very much closer when Eilish switched stages, and elevated via a moving platform. Those who were in the front, suddenly were in the back.

The experience lasted for a few magical songs, and was very much appreciated.

What I didn’t miss:

Billie offered two “rules” for the concert: 1) Don’t be an asshole, and 2) No judgment. We’re all equals, and deserve to have a good time.

Unfortunately, there’s some “judgment” of people who acted a bit of the first:

1) To the couple totally being “as one,” and macking down in front of us for 90% of the time and blocking the view of the stage, be considerate of others.

2) To the guy directly NEXT to me coughing the entire time, not wearing a mask, and lifting the collar of his shirt to cough inside it, come on! We’re more than two years into this! I wore a mask as to not capture any of the spray that hit my arm, and took a shower when I got home. Thankfully, he left early and we were able to spread out, breath and enjoy.

Unlike the will they or won’t they encores of the past, Eilish informed the crowd there were “two songs left,” and at the end the lights came on.

When the concert was over, I picked up the trash from my teen and her friends, and carried it out. There is hope for our future.

We are all in this together.

Posted by Louisa Bacio at 6:16 PM No comments: