Already starting to feel the holiday slump? Maybe a letdown after Thanksgiving, and need a lil’ pick-me-up before the end-of-the-year rush comes upon us? I promise, a looksee at a crazy excerpt from The Wolfe Pack manuscript will tickle your reading/writing bone.

In September, I took an online Fast Draft workshop with Candace Havens and Heather Long. The class had been recommend by several friends, including Denny Bryce. The object? Write as fast as possible – a week of planning a full 50,000 words in two weeks. Say what! And then a week of Revision Hell. Really, the only way to succeed is to write, write, write and not think about it.

Since I juggle a busy schedule as a mom, wife, professor, writer and everything between, I tend to write late at night.


Still, the following excerpt reads like I’m a multiple personality. In fact, maybe I’ve crossed over into that auto-writing that happens when a medium connects with a spirit.

Here’s a glimpse, and don’t judge!

“I haven’t been able to get it off, and I don’t have a whole lot of wiggle room here. Can you get me out of here?”
“Your wish is my command,” and while he didn’t have the costumes for the other nominees when she came by to pick me up.  “And I might have been thinking ahead. I brought bolt cutters.”
Dear Lord, what a wonderful man. She just be able to marry him. So what if wife #3 mysterious disappearances? Cause after this night, she was going to walk his own ass into the campground, and see if she could set him up within someone.
Odds are, he would go kicking and screaming, and it would be more than fun to see him in that situation.
Viktor bent down to cut the chains that bound around her ankles. Gently, he tucked a few fingers beneath one side in order to make some cuts without her being traumatized for it?
“Now hold still,” he said. These sheers are extra-sharp, and I wouldn’t want to lose any of your toes.”
He pried the metal links off with the machine, and then helped themselves to a few items in the kitchen, and snacks fit for a king, or at least a leader of a pack.

The bolding indicates where the story went really, really bad. I truly want to know about the third wife who went missing, and what types of snacks are fit for a king!

Obviously, the final version looks absolutely nothing like that! A SoCal RWA writer-friend Christine Ashworth also took the class, and I wonder what her Fast Draft looks like!

So tell me: Ever read something and go, say what? Do you think I can make another story of those extra lines? What was I thinking?

The *real* version of The Vampire, The Witch & The Werewolf: The Wolfe Pack is now available via Ravenous Romance, Amazon, Barnes&Noble and other eRetailers.

Werewolves and Their Real-Life Counterparts by Annabeth Leong 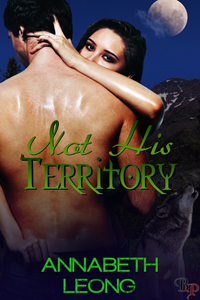 The Werewolf Council disapproves. Chandra is strictly off-limits for Raul according to both the traditions and laws of the werewolves. But after a life devoted to upholding principles, Raul’s instincts and desires are boiling to the surface. Can Raul resist Chandra, or will he break with everything he stands for to pursue a woman who is not his territory?

Annabeth Leong has written romance and erotica of many flavors -- dark, kinky, vanilla, straight, lesbian, bi, and menage. In addition to Not His Territory, Breathless Press published her werewolf story, “The Arcadian Cure,” in its Ravaged anthology. She particularly enjoys playing off myth, legend, fairy tales, and fantastic history. She believes passionately in freedom of speech, rights for people of all sexual orientations, and freedom of religion. She lives in Providence, Rhode Island, blogs at annabethleong.blogspot.com, and tweets @AnnabethLeong

Contest:
Thanks for reading! I'm giving away a PDF copy of Not His Territory to one reader of this post. Simply leave a comment answering the following question:
What is your favorite setting for a werewolf story?
You have until Dec. 3 to respond. Please leave your email address in the BODY of the comment, so I can contact the winner. For more chances to win, check out the other stops on my tour: http://www.writermarketing.co.uk/prpromotion/blog-tours/currently-on-tour/annabeth-leong/
Posted by Louisa Bacio at 12:00 AM 1 comment: