Have you been following the 2016 Menages Spring Tour? Almost time to wrap it up! But guess what? Today's my day!

We have the awesome and amazing Mary Menages Reviews to thank for the fun. Make sure to stop by her blog to check out today's clues.

To enter my contest for a lovely pair of rainbow earrings, you need to answer the question on her blog! 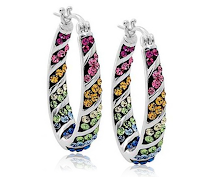 Plus, on Monday evening, I'll be taking part in a Q&A during the FB event. 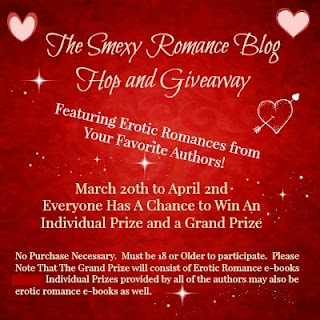 Welcome to the The Smexy Romance Blog Hop and Giveaway. Many thanks to Clare Dargin, who organized this hop! Make sure to enter the Grand Prize giveaway. I'm giving out three electronic copies of the series starter Summer School, and a $5 Amazon gift card. (Enter below)

Here's my SMEXY excerpt from Sex U Book 1: Physical Education: 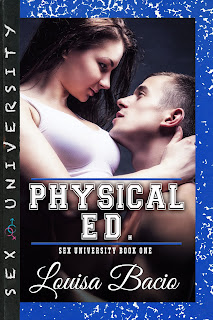 Sex U. trained in a variety of fields. The Dominatrix Diva sequence rivaled anything that Europe had to offer; High Society Seductress prepared women who were marrying into upper class families; and Pubic Relations taught the finer points of female enjoyment. The school had some prospective sex educators who wanted to teach at the university; and then there were those like Mandi who wanted to expand their extracurricular activities. The thought of being filled anally excited her, and sometimes when she masturbated, she rubbed that puckered hole, but as soon as a partner even tickled her tushie with a finger, she clamped those muscles tight. No entry was possible. She hoped the staff at SFSU would be able to teach her to loosen up a bit. She’d never know if she could enjoy it, if she was never able to try it.
Even with all the mental preparations, Mandi hesitated on the last consent form; she looked up and drank in her surroundings. What was she doing here? Was she crazy for giving her body away, willingly? She could have a handful of lovers, at any time she wanted. She had a stockpile of potentials’ numbers ‑ men and women ‑ in her iPhone. Many of which, she was sure, would be more than willing to give her pleasure and help in her education, so to speak. Instead of doing the sensible thing, she did the opposite, the extreme. Just like always. Maybe she wasn’t so average.
The representative helping her could only be described as Surfer Boy gorgeous. As if he sensed her hesitation, he smiled at Mandi. Wavy blonde hair curled around his ears, and blue eyes that sparkled like the moon on tropical ocean water peeked out from behind long bangs. Stark white teeth contrasted against his tan skin. His nametag read ‘Blaine.’ Mandi had heard of dance clubs where “only the beautiful people were allowed.” That rang true here. Not only were the applicants screened for their mental state but also for their physical characteristics.
Physical beauty and, even more importantly, a glamorous inner charm had blessed Mandi since her youth. At 5”7’, she could have starred in that ZZ Top’s “Legs” video. She possessed long, sculpted legs with calf muscles toned from modern dance. She’d come to love dance classes when she was in high school, and she had continued with the training throughout college.
Today she wore a black mini skirt that flared over her full hips, accenting her dancer’s ass, and a slit on the side,. Not too big, but definitely woman enough. She’d spent extra time getting ready that morning, and her black hair hung in thick ringlets down past her breasts. She’d tucked a handful behind her ear, and looked at Blaine with her dark green eyes. Today, her eyes reflected off her military brat tank top. If she wore blue, they would pick up that color. The only time her eyes changed on their own was when she was angry. Then, she’d been told a few times, they flashed gray.
The metallic pen rested heavy and solid between her fingers, and she signed her summer away. White marble tile covered the foray, and plush burgundy carpet started in the hallways. The school grounds lay beyond closed doors. Although she’d been through the interview process, Mandi hadn’t seen what lay beyond those locked doors. No one did until the first day. She wondered what mysteries and adventures lay ahead. Once she entered through those doors, there was no leaving for the summer semester. Her friends and family thought she was backpacking abroad ‑ if they only knew.
“Well, it seems as if all your paperwork is in order,” Blaine said. “Are you ready to start your instruction at Sex U. Ms. Wilkinson?”
Mandi took a deep breath. She couldn’t change her mind now, could she? “I’m as ready as I’ll ever be.”
“If you’ll follow me then,” he said directing with his hand. “This way to the antechamber.”
For someone who looked so laid-back, Blaine spoke eloquently, almost like an English butler. Rather than leading her forward, through those locked doors, Blaine strolled toward a side door. Amanda picked up her valise and followed him, watching the muscles of his tight butt clench inside his khaki shorts.
The door opened into an immense room, filled with many other doors.
“If you don’t mind, I’ll take that,” Blaine said as he grabbed her bag. “No personal items are allowed in the university.”
“But my clothes …”


“Everything you need will be provided.”

Available now via Amazon, ARe, Smashwords and soon at other eRetailers. 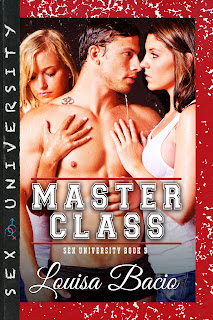 To enter my giveaway tell me: What types of classes would you like to see at Sex U? Please leave a valid email address.

Make sure to visit the other stops on the hop
Posted by Louisa Bacio at 11:10 AM 3 comments: