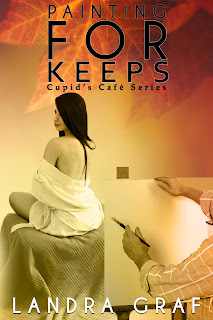 An invitation to Cupid’s Café will change your life.

Agatha, Aggie, Kakos lost her boyfriend, her apartment, and now, is one brownie bite away from purging her binge when an invitation to Cupid’s Café shows up on her doorstep. Fighting bulimia and her mother’s constant verbal abuse has never been easy, but this nutritionist is determined to be stronger than her weakest link. She’ll meet a secret admirer at Cupid’s for a morale booster, if nothing else.

Following a break-in and the destruction of his paintings, starving artist Murphy O’Shea finds himself at wit’s end. Not only does he need to create twelve more paintings, but in the midst of another manic depressive episode, the challenge seems impossible. He’s got two months or he’ll have to cancel his first show. The Cupid’s Café invite offers him a chance to find his muse. He doesn’t expect it to be the woman he’s mirrored the past two year’s paintings on, nor does he plan on being able to offer Aggie the help she needs.

Can they find a way to conquer their inner demons or will they succumb to the idea they aren’t worth a happily ever after?

Author Bio: Landra Graf consumes at least one book a day, and has always been a sucker for stories where true love conquers all. She believes in the power of the written word, and the joy such words can bring. In between spending time with her family and having book adventures, she writes romance with the goal of giving everyone, fictional or not, their own happily ever after


Excerpt:
Moisture welled in her eyes and she heard Murph's chair squeak as the legs slid sharply against the linoleum floor. Before she could object, or even answer his question, he hauled her to her feet and wrapped her in a hug. The way their bodies aligned, in some perfect way, like two puzzle pieces joining together, hit her straight in the chest and a knot formed there.
This hug touched her emotional center more than the first one. She could easily blame it on all the memories she'd stirred, coupled with this display of affection. Jordan had heard her cry about her family before and always told her to forget them, live in the now with him. Murph did the opposite.
“They were assholes, and I know it hurts. But this hug is a good memory. One you can draw on when the bad ones surface, which they always do even when we don’t want them. I'm not leaving you.”
She squeezed him back, loving how his muscled parts fit against her soft ones. She was incredibly softer than he, but it worked. He held her tighter and smelled of pine and paint, a refreshing scent. When they finally pulled apart, more like their upper halves loosening the hold on one another, he kept his arms and hands entangled with hers. They’d shared something, a common respect for both of them being a bit damaged, a bit not-quite-right.
They locked eyes and for a moment, Aggie believed he'd kiss her. She wanted him to. Just once, to know what the experience of kissing someone who got her was like.

Every dragon hoard starts with something…or someone.

Tomas hates scientists, especially since they abused him in such vile ways. And yet, there is something about the doctor that calms his inner beast.

Tomas craves her. A treasure for his collection, but how can he convince her to stay?

Chandra is frightened by the dragon keeping her prisoner in his aerie. He’s been hurt so who can blame him for the madness within? However she sees a glimmer of goodness too. Can he open his heart enough to let her in, or will he unleash his fury upon the world?

Website: http://www.evelanglais.com
Twitter: EveLanglais
Genre: Romance, Science Fiction & Fantasy, Humor
~ New York Times and USA Today Bestselling Author Hello, my name is Eve Langlais and I am an International Bestselling author who loves to write hot romance, usually with werewolves, cyborgs or aliens. I should warn you, I have a twisted imagination and a sarcastic sense of humor something I like to let loose in my writing. While well known for my shifter stories, I am also extremely partial to aliens, the kind who like to abduct humans and then drive them insane...with pleasure. Or do you like something a little darker, more serious? Then check out my cyborgs whose battle with humanity have captivated readers worldwide.

If you'd like to know more, read some excerpts or find out what I’m working on, then please visit me at http://www.EveLanglais.com or sign up for my newsletter at http://www.evelanglais.com/newrelease . I am also extremely active on Facebook: https://www.facebook.com/eve.langlais.98

a Rafflecopter giveaway
Posted by Louisa Bacio at 11:06 AM No comments:

At times, it feels like fiction crosses over to reality: When your characters become so alive that when a major event happens, and you think about them, and how they’re doing.

That statement sounds much more convoluted than how I’m feeling. The bombing at the Ariana Grande concert in Manchester, England was and is devastating. What added to the strange for me though was thinking how Sebastian, my British rock star from The Big One, would feel about it.

It’s one thing to be deep in the characters’ lives during the writing of a book, but it’s not very often that I revisit the storylines and think about them.

See, without giving away way too much, Sebastian has ties to a similar event. When I read on CNN that Manchester was “the deadliest terror attack on British soil since the 2005 London bombings,” I knew I was feeling this way for a reason.

As writers, we invest ourselves in our characters. As readers, those same characters come to life via the page. For The Big One, I did a lot of research on the 2005 London bombings, so I became more familiar with the details than the average person. I started writing this post the day after the bombing in Manchester, and then held onto it – too close, and I didn’t want to feel like I was piggy-backing on the tragedy at all. Sometimes, though, if I don't write it, I can't get it out of my head.

Then came this past weekend’s attack on the London Bridge and nearby areas, and the sadness persisted. Although I see a lot of people commenting on how they don’t want to focus on these events, and how depressing it is, it’s also very difficult to ignore the world’s events.

The BBC News ran an article on three French victims in the London Bridge attack. http://www.bbc.com/news/world-europe-40192321, and the victim from Spain who attempted to fight the attackers with his skateboard. Such devastatingly brave and handsome men, who are now gone after these senseless acts of violence. Definitely worthy of the label, hero.

Perhaps, in this instance, life will inspire fiction. Xavier sounds like a fine name.

Tell me: Has this ever happened to you? Think of a character long after you’ve finished their story? Or perhaps connected with one during reading?