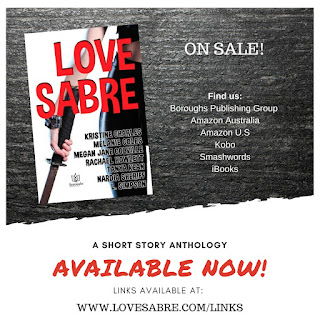 Why, you may ask, are we popping up on Louisa Bacio’s blog?

Well, a few of the Sabrists – Kristine Charles, Nardia Sheriff and Tanya Kean- met Louisa in 2017 when she led an online course on writing short stories for Romance Writers of Australia. After that course, the Sabrists wrote some short stories that became three of the seven short stories in a new anthology – called, appropriately enough, Love Sabre – and so she’s partly to blame for this craziness being released into the world!

The idea on which the anthology is based came when we were overtired, and probably a little hungover, on the last day of the 2015 Romance Writers of Australia conference. Instead of paying attention at the AGM, we decided to start a discussion of all the squicky words and phrases in romance writing. You know the ones. Moist. Panties. Throbbing manhood.

The best one we came up with was ‘sheathe your love sabre’ and it stuck. The following year we dared each other to write the phrase into a story. And that’s where Love Sabre was born.

The stories range from sweet to spicy, from fun to intense. And they’re short enough that you can get through a story or two on your lunch break, or while the kids are at sport, or on the bus on your way to work. We’d love you to check them out – and let us know what you think (all our social media links are below).

Writing Tips from the Love Sabrists

In honour of the Love Sabre anthology being released on 6 February 2018, and in honour of Louisa’s input (directly, and indirectly) into a few of those stories, we thought we’d put together a list of the top five good (and not so good) writing tips we’d received over the years:

First, write. Stick your ass to the chair with bum glue, put your fingers to the keyboard (or pick up a pen) and put words on the page. You can’t edit a blank page is a phrase often attributed to Nora Roberts (amongst other writers) and, given she is the Queen of Romance, we’ll go with her advice here. Nora considers writing to be a job, folks. She turns up and puts words on a page. Do that, and, it might be the worst stuff ever written, but at least you’ve got something to work with.

As an aside, a quote commonly attributed (or misattributed) to Hemingway is ‘write drunk, edit sober.’ And that’s probably not a bad idea. Turn off your inner editor when you’re writing, drown him/her if necessary, in whatever beverage takes your fancy, just to get the words down. Once you’ve sobered up you can see how much of what you’ve got down is salvageable. But if the words aren’t on a page you can’t fix ‘em so… Salut!

Second, while not everyone’s a planner, completely pantsing it will, in our experience, generally lead to much cutting and tears later when you’re trying to edit the damn story so that it makes sense. So, before you sit down to put words on the page – make sure you have a rough idea of the key points in your story. You don’t have to have the entire thing broken down scene by scene on post-it notes (although, pretty). You just need to have a rough idea of where you’re going. It also helps if you get stuck, because you can jump forward to the next point where you know something’s going to happen to get the words flowing again.

Third, writers are often told ‘write what you know.’ To that, we say, crap idea. If you aren’t going on an adventure as your write, how can you possibly expect to take your reader on an adventure when they read? When you write, push yourself, your knowledge and ideologies (but also, do your research – nobody likes a butt plug without lube).

Fourth, when you’re on this crazy writing ride you should trust your instincts. Don’t (necessarily) try to follow a trend… vampires won’t really last forever. Just write what calls to your soul. And yes, if that’s vampires, or werewolves, or twenty-something Dominant billionaires, do your best! Just don’t write any of the above because you think it’ll make you squillions. It probably won’t.

And finally, segueing nicely from the trust your instincts/don’t follow a trend theme: don’t compare yourself to other writers. We cannot all be Stephen King, Nora Roberts, J.K. Rowling, or E.L. James. There will always be someone better than you, someone in the right place at the right time, riding a wave. That means, though, that there’ll always be someone not as great as you, waiting for their shot, and being dumped on a sandbank. Your time will come.

Comparisons in the interim just make you crazy (or crazier… probably crazier.) Rather than tearing your fellow writers down, support them as you all travel this winding road. We’ll all be better for it.

And, a bonus tip, which is probably the best tip of all.

Just do what works for you. 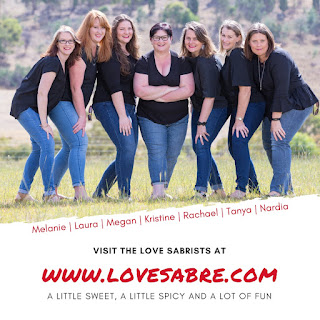 Seven Aussie authors decided the most purple prose phrase they could think of was, “Sheathe your love sabre.” So, naturally, they agreed to each write a story that included the phrase. From those auspicious beginnings, the Love Sabre anthology was born. From spicy hot to sweet, each Love Sabrist has penned a wonderful, yet very different story guaranteed to make you smile, laugh, gasp, or cry. All of them will make you go, “awww.”


Smashwords: smashwords.com/books/view/783322
Posted by Louisa Bacio at 9:39 AM No comments: