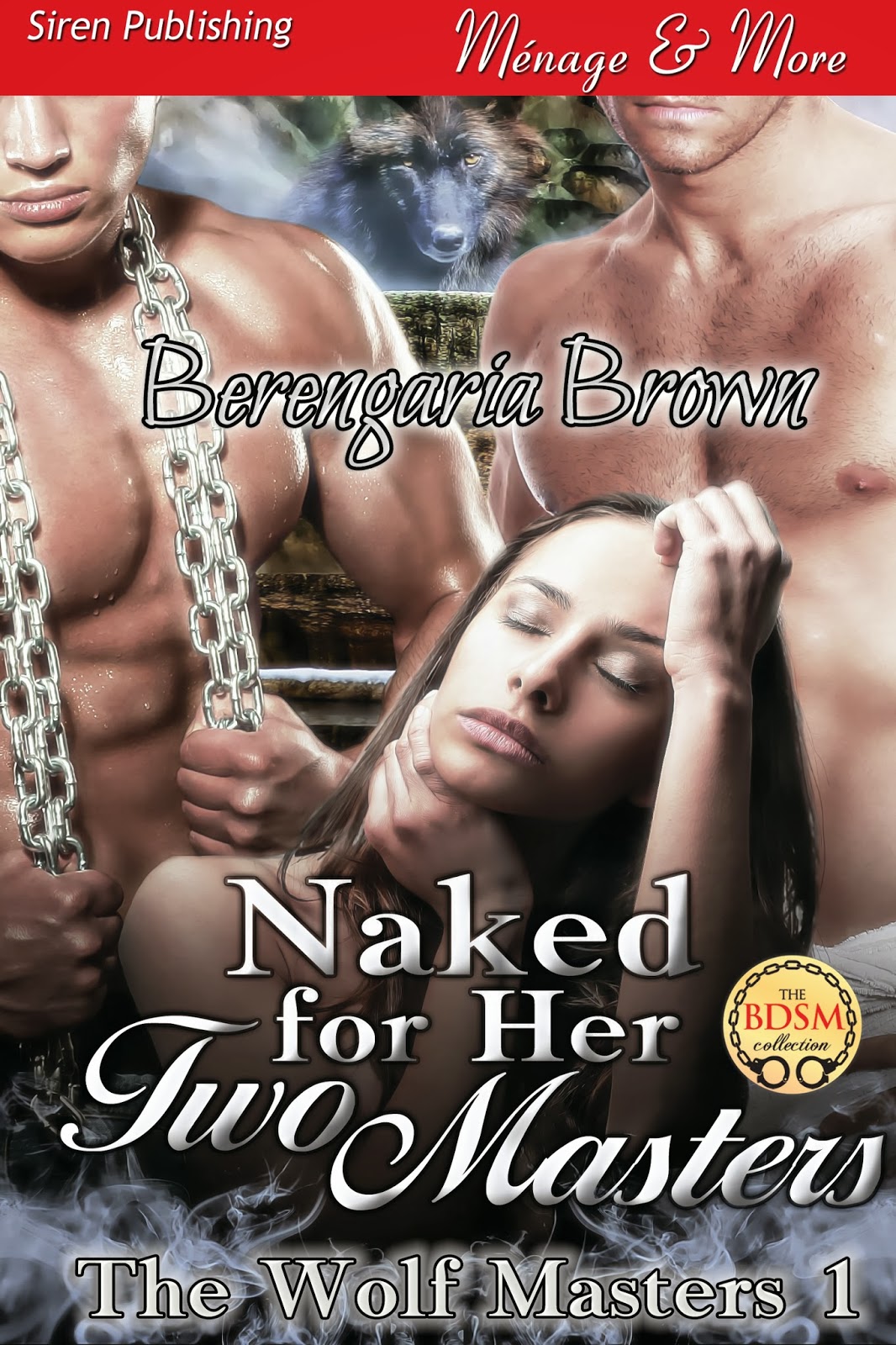 Naked for her Two Masters, book one of “The Wolf Masters” series.

Andorra Yasbit’s father took off with a blonde bimbo and her stepmother closed their apartment. So Andorra hikes up a mountain and discovers a wonderful hot spring. The only problem is the werewolf who owns it is Master Kingston, who’s used to being pursued by gold digging women. And he has an equally Dominant best friend, Master Raleigh. They don’t believe she’s arrived by accident.

The two men take Andorra to the dungeon, but instead of being scared Andorra revels in the punishment and orgasms. The men can’t find any evidence Andorra has been lying to them, but Master Kingston can’t bring himself to trust her either. And the more time they spend together, the stronger the attraction between the three of them grows. Kingston is determined to break her and prove she’s deceitful. Raleigh wants to believe her but owes his allegiance to his Alpha. What can Andorra do to demonstrate she’s telling the truth?


Fury raced through Kingston’s veins as he stared at the strange woman in his hot spring. Were the fucking gold diggers following him to the mountain now? Where the fucking hell had she come from? He couldn’t imagine a woman hiking up the mountain. It’d take days and she’d need a support crew with a tent and food and all her equipment. No, she must have had a helicopter bring her and the pilot had landed her at the wrong spring. For a moment he wondered how long she’d been lying there waiting for him to find her, then shrugged it off. Too bad. She was about to have a reality check. It was a good three miles over very rough rock back to the pack’s home. That should teach her not to act precipitously in the future.

He stood on an overhanging rock and roared at the interloper, “What the fucking hell are you doing in my hot spring?”

He felt a momentary flash of guilt when she startled so badly she sank beneath the water and came up coughing and splashing.

“I’m sorry. I didn’t realize this was private property.” He watched her scramble out of the water, keeping her back to him. Did she really think that acting all shy and hiding her nakedness when she’d come here deliberately to entice him would work? She couldn’t possibly be that stupid. Then he remembered some of the other women who’d pursued him. Yes, she could be that dumb. He watched her open her backpack and pull out a towel, rub her body briskly then climb into jeans, a T-shirt, and a sweater. The clothes looked well-worn. He’d expected her to wear something nicer, but perhaps she intended to keep up the innocent act.

He also noticed she dried her feet carefully—far more carefully than she’d dried any other part of her body—before putting on clean socks. That was the way genuine hikers behaved. Feet were the most important part of a hiker’s equipment and it made good sense to treat them properly. He watched her push the dirty clothes that had been left on the ground beside her boots into the backpack, and then shrug it over her shoulders. Like her clothing, the backpack was far from new. Likely she’d bought it secondhand or from a thrift store. She had a bedding roll pushed through the straps of the backpack.

She kept her back to him and walked up the hill at the side of the hot spring, heading west.

“Where are you going?” he asked.

“Back to the river. Or is that still on your land? May I stay at the river tonight please?”

“Why?” He couldn’t understand why she hadn’t asked to go to his home. What devious plan was in her brain?

“I don’t have any food left and if I set my net now I might catch a fish for breakfast.”

“Why don’t you want to come to my house?”

“You told me to get off your land.”

“No I didn’t. I asked you what you were doing in my pool. A question you haven’t answered.”

While they’d been talking he’d walked around the rim of the hot spring so he was still above her but much closer to her now. Her brown eyes were a little bit sunken in her face and she looked tired. The jeans she’d put in her backpack had been very dirty, as if she’d been wearing them for a while. He wondered if she really had climbed the mountain, or at least come quite a distance, and if she had run out of food or if that was just a ploy to get his sympathy. Some women were incredibly manipulative, especially when they hoped to catch a rich husband.

She turned to face him fully. “The short answer is soaking and resting. The long answer is I came to the mountains for peace and a break. I saw the steam rising from your pool and I thought it was going to be a volcano so I wanted to look at it.”

“There are no volcanoes in these mountains.”

“I didn’t know that. I didn’t know there were hot springs here either, though. Listen, is it all right if I stay by the river? I need to leave now to get there before dark and set my net.”

“Follow me to my house instead. I’ll feed you.” He was probably being naïve letting her come, but if she genuinely had no food he couldn’t leave her out on the mountain.

Burned out human speech therapist, Nevis Greenway, has been recuperating at Hot Springs Mountain. She likes York Greenmountain with whom she plays cards, but he’s shown no interest in her. Until his best friend, the Dom Bronx Montaine, arrives.

Bronx is about to open a new branch office for the werewolf pack and he’s been told to take a woman with him. York suggests Nevis, and Bronx thinks she’ll suit him very well. Nevis is happy to go with them, and sleep with them, too, but just until the branch is established.

Book 3, Seduced by Her Two Masters has just been accepted by Siren and will release in March.

When two grown-ups love each other, someone might get a spanking!
How would you like a brand-new Kindle Fire or Nook HD or another prize from a pool valued at nearly $600?

How about free stories from award-winning authors?

Want to become a Love Spanks ambassador and earn an extra prize entry? See below!

Even better, participation could earn you a GRAND PRIZE!

Many authors also will offer a contest on their individual blogs.  Your comment on their blogs automatically enters you in both the main contest and the individual contests!

What’s the catch?  Absolutely nothing!  We love writing for you and want to thank you for your readership.  Perhaps someone might get a spanking or two, but that’s a reward rather than a catch, right?  ;)

Here are the rules:
Like these events? Want to support your friendly spanking fiction authors? Become a Love Spanks 2014 Ambassador! In exchange for promoting this event, you will receive one extra prize entry, AND you are still eligible to participate and win prizes! To find out the details, send an email to ana_stasia2007 at yahoo dot com, with the subject line “Love Spanks Ambassador.”

For more information, updates, and a list of participating authors, please visit:

Governingana.wordpress.com
Posted by Louisa Bacio at 12:00 AM No comments: