Summer reading: All of Me 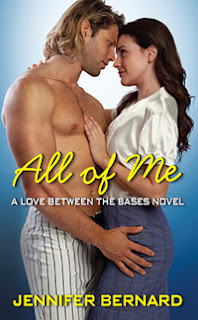 All of Me
Jennifer Bernard

I’ll admit: I’m a convert. From firemen to baseball players, I’ll follow Jennifer Barnard with her new series, and thankfully she doesn’t disappoint.

Book 1 in this new series features the minor leagues, but the story lives up to major potential. Caleb Hart is a first-rate pitcher who’s lost his mojo. Inspiration comes in the form of Sadie Merritt, who after a bad break-up with a nasty ex, only wants to focus on work and definitely stay away from boys, especially hunky bad boys.

What brings Bernard’s stories to life are the relatable and likeable characters. We get into the psyche of Hart, and he’s a good guy:

“Caleb nodded, and handed him the ball. It felt like handing over a piece of his heart.”

For Sadie, staying away doesn’t come too easy when her job throws her together with Caleb for a PR campaign to “Save the Slugs,” and reform the image of the partying baseball team, Kilby Catfish.

“The last thing she wanted was to run into that ballplayer again. That half-naked hunk of a ballplayer. Annoyingly, he hadn’t even smelled bad, despite his sweaty state. He’d smelled like sun-heated flesh and oiled leather. He’d radiated furious energy, a kind of restless power, as if he wanted to shake up the world and put it back the way he wanted.”

Bernard takes readers on an emotional whirlwind as fast as Caleb’s 90 mph fastball. In a scene toward the end – no spoilers – I went from out-loud giggling to tears like that *snaps fingers*. It doesn’t matter that we know it’ll all work out. It’s the process that’s magical.

All of Me sets up the Love Between the Bases series. Next up, I’m hoping to find out more about her best friend Donna and player Mike. But you know how these authors are; she may make us wait a while for that story!

Email ThisBlogThis!Share to TwitterShare to FacebookShare to Pinterest
Labels: All of Me, Jennifer Bernard, louisa bacio, Review, sports romance 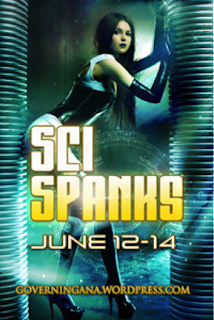 
While the free reads have currently been taken down, you can soon get the entire collection via eRetailers. Stay tuned!
~*~*~*~
In addition to the terrific list of prizes available, commenters on this blog will have the chance to win one of the following prizes:
Please leave a comment and a valid email address to enter.
** Note: Awake comes from an excerpt from a currently unpublished tale that I'll be submitting to Decadent Publishing's Beyond Fairytales line. I hope you enjoyed this sneak preview!
Louisa Bacio
http://www.Facebook.com/LouisaBacio
http://www.Twitter.com/LouisaBacio

Find a link to all of the other participating authors here!

We’ll give you the clues, you figure them out
Answer in pictures, to the net roam about

Be creative and post us a link
In comments on our blogs, then have a good think

Check back on the 14, to see who won…
We’ll announce it all special, a slideshow of fun.

The Blue Book of Ftales has all you need
Buy it now, race with speed

The links below will send you to
The place where we made fairytales new.

All of my clues come from "The Thief & His Master."

Indiana used his to save the day,
Grey keeps his in the red room of pain

Batman and Superman, Spiderman, too,
Capes and some tights uniform this group

Fermented in barrels, its own cellar has,
Homemade in bathtubs, bums drink from flasks

Feed them in the park, they never go away,
Carrier and homing, on rooftops they stay

Blotters and pens cover the top,
On these work happens but at 5 stops

Old owners stay here not going to the light,
Chains and cold spots, things go bump in the night

It goes on forever, a circle of love
Has its own finger, hard to wear in a glove

Help wanted, For sale, in papers to read,
These show what others want, something they need

Cram in your stuff, money or clothes,
Not charged to check if the overhead closed

For memory of files measured in gig,
Fit in USB, not very big

A hand cuff or belt, fur or leather,
When used in the bedroom, better together.

If you haven't visited, make sure to stop by Anastasia Vitsky's blog for yesterday's clues, and tomorrow watch out for Melissa Shirley, who we have to thank for all of these lovely rhymes!

So post your responses to these clues! Can't wait to see what you come up with!