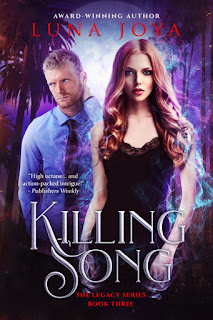 It’s my favorite of the series – so far, and that’s saying something.

It’s not often that you reach book 3 of a series, and they keep getting better! While I’ve enjoyed all of Luna Joya’s books in The Legacy series, Killing Song stands out. While each book works as a standalone, it feels like Joya found a magic with these characters and the connecting storyline.

Let’s be honest, I have a few prejudices when it comes to paranormal romance:

I underlined many lines that marveled my reader senses, such as:

“The mood reflected off her like it had been searching for her as a beacon.”

Z&Z. Thankfully, Joya didn’t adhere to one of the conventions of writing romance: Don’t name the hero and heroine with a name that begins with the same letter. Pffft. I never understood that. Most definitely, Zaida and Zimm are unique, and there’s no mixing the two.

Joya sets these stories in Southern California, which adds to the charm. Whether it’s cruising through Hollywood, or exploring an eerie high-rise apartment in Long Beach, the reader takes in some real details that add to the world-building. It’s on the level of Anne Rice’s Vampire Chronicles: She makes me believe.

Finally, there is an interconnectedness that flows through the entire series. Previous characters play a role, and Joya hints at future pairings. Honestly, I want cozy up to her at a bar, buy her a cocktail and learn all the secrets of future books. But, there is a joy of watching the mystery unravel while being entertained reading for hours.

For now, I’ll be thankful for the love of Zaida and Zimm.

One more kill and she’s free. But only if she doesn’t fall in love first.

Love destroys. Zaida has lived by that motto for centuries as a siren and the faerie queen’s most lethal assassin. So keeping things strictly professional with the sexy human she’s working with on the FBI’s paranormal task force shouldn’t be a problem. Except it is.

Former Army Ranger Zimm isn’t a big fan of love either. Losing everything and everyone will do that to a guy. Keeping his hands off the badass, sword-happy siren who’s helping him track down a murderous demon should be easy. But it isn’t.

If Zaida and Zimm have any hope of claiming their happily ever after, they’ll have to catch a killer, outwit immortal royalty, and face off against an evil magical organization. And then there’s the little matter of the last hit the queen has ordered Zaida to carry out in exchange for her freedom. The target? Zimm. 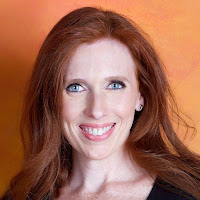 Posted by Louisa Bacio at 12:17 AM No comments: 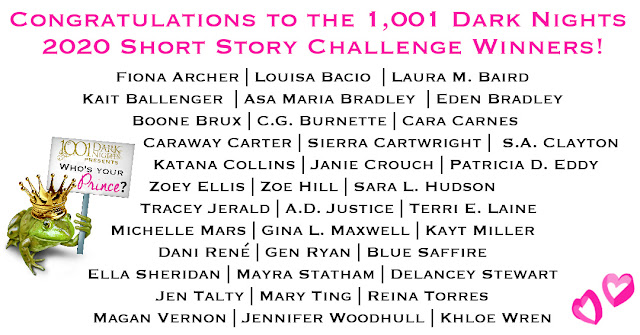 I'm so excited to be included in this upcoming anthology with 1,001 Dark Nights! I've been a huge fan as a reader for a long time.

Plus, some new-to-me authors (like C.G. Burnette, who I adore already!) who I can't wait to work with. It's already been an amazing experience, and it's only just begun!

We are thrilled to share the winners of the 1,001 Dark Nights 2020 Short Story Challenge with you all!

This is the first time that we’ve run a challenge like this and we are beyond excited with the results. We had hundreds of submissions and were overwhelmed with the quality of both the writing and the characters from so many amazing writers. Because of that, we’re proud and honored to be highlighting nearly forty winning authors and their stories!

This anthology will be free on all retailers and links will be sent to our newsletter subscribers this December (2020) as a gift to readers.

For more information about the authors, visit:

Posted by Louisa Bacio at 7:03 AM No comments: