If you have children, then you know as soon as Halloween is over, they start talking about what they’re going to be next year. It’s an on-going discussion, until the event actually happens. A few months ago, the costume of choice was My Little Pony.

We saw the new Annie opening week, and since then my daughter’s been singing her heart out. Yesterday, I bought her the CD and we listened to it on the 40-minute drive home from school, and again this morning. So her pronouncement is no real surprise.

What struck me though was the choice – Annie. When I was growing up, little girls didn’t dream of playing Annie unless they had short, curly red hair. Serious.

The long-standing icon was created by the likes of Shirley Temple and the 1977 version I grew up with. It continued through stage productions for years and years.

What makes me so excited about the diversification in the new Annie is that anyone can play the role. My dark-blonde, green-eyed daughter can say, “I want to dress up as …” and not think twice.

Now that’s a bit of magic that not everyone thinks about. What do you want to be when you grow up?

Email ThisBlogThis!Share to TwitterShare to FacebookShare to Pinterest
Labels: Annie, Diversity, I Think I’m Gonna Like It …, louisa bacio

What’s on Tap! Works in Progress 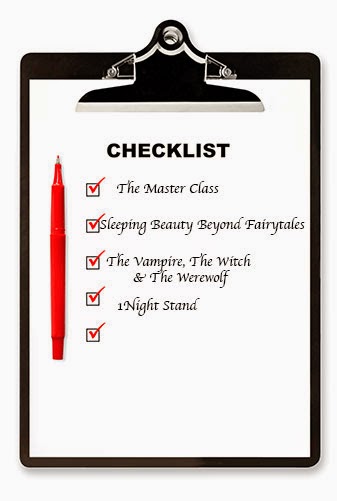 We’re a few weeks into the new year, and I’m furiously working on a few stories. I’ve received some emails asking about the next Vampire, Witch & Werewolf novel, and when I saw my cousin this week, she asked about the next “Death” book (my 1Night Stand series).

So here’s what I’m working on:

Sex University: The Master Class – The third book in the series has been living in my head for a few years. I’ve received the rights back to the first book, Physical Education, and a new publisher will release both.

The story is a FFM, and features a special “couples” retreat.

Following up on the Three Times Lucky Box Set is one featuring hot paranormal stories. I’ve started one, and need to finish.

I scored a coveted re-telling of Sleeping Beauty. With proposal in hand, the writing is vying for attention.

The Vampire, The Witch & the Werewolf: Zada’s story

Right now, this book is the last planned in The Vampire, The Witch & The Werewolf series. Along with Zada, the story also will tie up Jana, Dom and Andre.

Predicted release: For Authors After Dark in August

“With Death” 1Night Stand – Yes, there’s at least one more in the series. Death’s a bit peeved about losing so many new recruits.

And then there’s that Duran Duran fan fiction anthology some friends and I teased about. Yes, we’re all interested!

So that’s a glimpse into my working mind for now. Many of these clamor for their story to be told NOW. But, they need to wait their turn. Plus, who knows what else might spark inspiration!