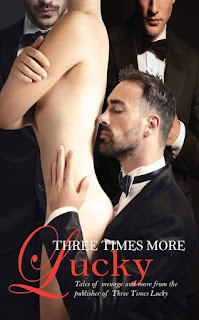 
Three Times MORE Lucky-Six sexy tales of ménage and more by the publisher of Three Times Lucky
A crash landing leads to three hearts united. ~ Triad by Kim Carmichael
Sometimes the one that got away comes back… ~ Love Squared by Christina Christine Ashworth
Four men and one woman discover the power of Worshiping the Goddess in a hot time travel to the ancient Celts. ~ Solera Winters
In the dark forests of the heart, love is waiting… ~ Snow by Erzabet Bishop

Posted by Louisa Bacio at 8:37 AM No comments:

Looking for some Trouble with @JennLeBlanc

I couldn't choose, so there will be four different covers available at the different retailers. Each cover says something a little bit different about our Celeste.

Celeste Moravia Agathe Alain needs to find a husband and she believes Quintin Wyntor will do just fine.

She's hopeful they can come to a mutual agreement, one in which he will not have need to visit her bed and claim his rights as her husband. She follows Quinn after a ball hoping to find him with a mistress but what she sees isn’t just shocking—it changes her life forever.

Stumbling onto Quinn with his lover awakens something in Celeste she never knew existed. Until now she had no idea what lust or physical love was, and while she still doesn’t want to be touched…she does want to discover more about herself and what it is about seeing the two men together that makes her feel so alive.

But Quinn and Calder discover her trespass and Celeste is afraid she’s destroyed any chance of Quinn being happy.

Getting closer to Quinn is dangerous—he’s hurt and wants to use intimacy to heal. But that's something she isn’t interested in even if he doest believe her. Celeste knows that his happiness is tied to hers, and none of them will be able to live unless she finds a way for Calder and Quinn to be together.

A note about the characters:

Celeste Moravia Agathe Alain is grey asexual autochlorissexual.  Her hero, Quinn, is bisexual.  His hero, Calder, is gay.  This book is Celeste's story, it's her HEA, the next book is Calder and Quinn's HEA.  So, when I say he's her hero, it's not in the traditional romance genre sense. Except it also is.


This book is the story of Celeste and has her happily for now. It is also the beginning of Calder and Quinn’s story which will be continued in THE SPARE AND THE HEIR when they will get their happily ever after SOON.

Celeste bit her lip and turned from the open door, but biting her lip wasn’t enough, so she covered her mouth with both hands. She couldn’t believe what she’d just witnessed.

She slid down the wall, rested her forehead on her knees, and covered her head with her arms. She wasn’t sure what to do next. When she’d followed Quinn here after the ball, this was the last thing she’d expected to see. Well, fine, possibly not the last thing, but it certainly wasn’t in her top ten, by any means. She gazed up to the sky and pinched the bridge of her nose. How was she ever going to look him in the eyes and not think of this?

She couldn’t. There was no way. That was…the most amazing thing she’d ever seen. Her body felt like it was on fire, like…she wasn’t sure how to describe it even to herself. Her skin was vibrating. It was alive, as though her blood sang and pooled in her belly, dripping slowly to places she’d never felt before.

Perhaps this feeling was the one that people had forever been trying to describe to her, but she’d never understood—having never once experienced it. Not even when she’d tried to touch herself.

She wanted to touch herself now, right here on this balcony outside Quinn’s cousin’s house. She didn’t, of course, but she wanted to.

Oh dear God, Quinn and his cousin. She heard a noise and squished herself as far into the corner of the balcony as she could, tried to make herself smaller, bowed her head to hide behind her riot of black locks. She glanced sidelong over her arms and saw Quinn, still just a towel on, walk to the balustrade and tilt his head up at the sky. His chest heaved—was he crying? Her heart skipped.

Calder had been quite mean to him. He’d been…she’d always thought Calder to be the most respectful and gentlemanly of men. Not that she’d had much interaction with him, but what she’d had, this was someone else altogether, so angry, so…passionate. The thought of it sent goose bumps across her skin, and she clenched a fist against her mouth once more to prevent any sound.

Quinn shook his head and looked down, covering his face with his hands and running them through his hair. He turned and went back into the room, and Celeste leaned over, looking through the door as he dropped the towel—I should stop looking, shouldn’t I?—and reached for his clothing.

She kept her eyes on Quinn as he yanked on his ruined clothing. She resisted the urge to help him, wanting so very much to console him somehow, to help him button his shirt and find his coat. He had one button left and six holes on his trousers, and she could see that if he just crossed the top button hole across the front to the opposite remaining button on his trousers, that one remaining button might just keep his trousers on until he could make it home.

And she felt horrible because of it. She felt it was such an invasion of his privacy to watch this, and of course, that made her feel even worse that watching this—watching this man pick his dignity up off the floor and attempt to put himself back together—was much more intimate than watching Calder fuck this man across the floor.

She turned away and leaned into the wall and tried to breathe. She shouldn’t have followed him. She shouldn’t be here. If she could take it all back…she stared up at the sky.

“I’m sorry. I’m so sorry. But I wouldn’t take it back,” she whispered at the sky.

“God help me, I wouldn’t take it back.” She heard Quinn coming toward the balcony and turned away again, hoping for one more moment of blind luck in which she wouldn’t be discovered... 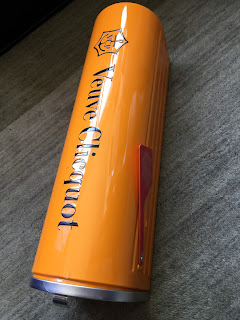 Beginning writers are often told to: “Write the story you want to read, not what someone else might want to see.” This class, instead, deals with catering a short story specifically to a publisher’s request for submissions. Regularly, editors and publishers list upcoming anthologies and the types of stories they’re looking to include.

End Goal: Come prepared to write! Student should write at least one new story during the course and actually send it out for submission. We want to see some publication success with this course.

Many previous students have completed their stories, and have been published.

Contest: Absolute just because! During this workshop, I'll give away the pictured Veuve Champagne metal mailbox to one enrolled student who finishes a story and submits! (No champagne included.) The winner will be chosen randomly from all those who complete the challenge. Honestly, when I saw it, I thought it would be perfect for a submission/rejection collection!

Hope to see you there!

Posted by Louisa Bacio at 12:45 AM No comments: