New release: What would you do if you loved two people? 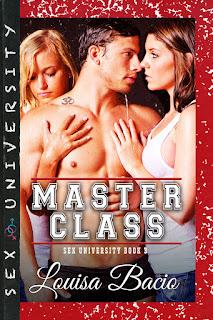 It’s been a long road, but thrilled to announce that the all-new, full-length novel The Master Class has been released. In book 3 of Sex University, everything Ms. Lucy thought was the truth turns upside down.

A love triangle for a new age of romance.

Clarissa abandoned her fiancé and their upcoming wedding in order to find her path. With a fresh relationship with a woman, she looks forward never back – until her ex comes searching. Trapped between the man she’s destined to marry and the woman who’s won her heart, tough decisions lie ahead.

Sometimes the past catches up.

Available now via Amazon, ARe and other eRetailers.

Check out the other books in the series! 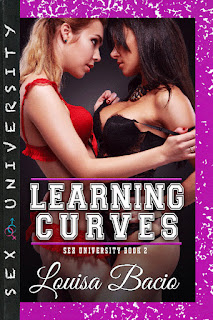 Raised by an over-controlling and manipulative father, Savannah “Van” Morgan flees the East Coast for the West, seeking sanctuary with her Aunt Lucy, headmistress of San Francisco Sex University. Rather than staying at the main campus, Van enrolls in SFSU’s more nurturing “sister” school.

After visiting the main campus of SFSU, Margaret “Maggie” O’Neil hangs up her police badge in search of new experiences and hoping to awake her own dormant sexuality.

With subjects such as an “Art Sex-education” class with an Italian professor who’s happy to schedule private tutoring after-hours, the school invites all sorts of sexual exploration. In the end, Van and Maggie fight to overcome the Learning Curves to overcome the pressures of society and save each other.

Available now via Amazon, ARe, B&N and other eRetailers.

Available now via Amazon, ARe, Smashwords and other eRetailers.
Christian Mingle

Sometimes you need to experience what’s wrong in order to find out what’s right.

As scandal after scandal piles up and her husband’s caught cheating, Jody Druger hides at the last place the non-reality TV shows expect: Sex University.

While fighting through her bedroom inhibitions, Jody learns who she really is and forges plans for an independent future, discovering new pathways toward pleasure in the process, a truly religious experience.

Available now via Amazon, ARe, Riverdale Avenue Books, Smashwords and at other eRetailers.

Ms. Lucy dreams of starting a sex school in San Francisco, the City of Love.  After interviewing some promising candidates, including Antoinella De Luca, an artist who integrates her tools into playtime, and twin blond surfer hotties, Blaine and Wayne, Lucy launches a soft opening, Summer School.

One of the first students to join, Willow, comes seeking to explore new experiences. When paired with Ted, who she feels is way out of her league, it’s a game of give or give.

Lucy likes it when the shy ones pair up with those with more confidence. And so do we!

Available via Amazon, ARe, Riverdale Avenue Books and other eRetailers.