** Note: A tiny spoiler if you haven’t seen even the promotional images.

Lots of good in the Justice League movie. I will say that two/five who went with us last night fell asleep! So ... yeah, there’s that.

The movie lived up to all the wham/bam potential. The interplay between characters was strong, and each held their own. The movie covered a lot of ground

We needed to see way more of Aquaman than brooding. Flash was fantastic -- very like the new Spiderman character, young and quirky. He adds a lot of the comic relief.

Most well-rounded new character: the troubled Cyborg. The audience roots for him, and wants to know more. Since I read that the actor reshot some scenes when Josh Whedon took over, I'm going to guess it worked!

Bad: The film plays upon past superhero conventions. There’s an early scene with Wonder Woman doing something “no man” can do. Pfft. Been there, done that. Still cool but not as powerful the second time.

Likewise, a la Avengers: Age of Ultron, I feel sorry for those isolated towns that become fodder for the final battle.

Batman: Try as I might, I’m having a hard time differentiating all the trash happening in real life with Ben Affleck (who I’ve traditionally really liked), and the character. The graying hair and chiseled chin pulls me in, but I really don’t want any chemistry with Wonder Woman. Nope. Not ready to go there no matter how much Alfred insinuates.

My 10-year-old said it looked like Affleck was wearing a corset under his Batman “chiseled chest,” and what’s it say that a Tween picks that out?!

Now on the man-chest discussion. Barely a glimpse off Aquaman. Seriously, we don’t want armor from the “mer-man” (again, Tween).

On the other hand, Superman lived up to his super name. (Hopefully, no spoilers because he is on the promotional posters).

“I hope Henry Cavill got paid extra for going around naked the whole time,” the Teen.

These two kill me! We’ll definitely be seeing it again in theaters, thanks to the younger one falling asleep, and hopefully, I’ll get to pick up on other nuances.

Extra scenes: DC must have gotten the memo. There are two extra scenes. IMHO, they still need to figure out the magic. The second scene goes way too long. We don’t need that much of a teaser! 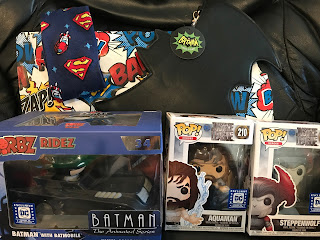 To Enter: Leave a comment (and contact email addy) and follow me on Twitter/Facebook (whichever you have). Shipping is U.S. only. The winner will be pulled randomly on Tuesday, Nov. 28, after the Thanksgiving holiday.
Posted by Louisa Bacio at 1:23 PM 15 comments: