Louisa, thank you for letting me post on your blog today. For those readers that are not familiar with my work, I write male/male romance. I just had my 12th book published since writing m/m back in 2009. Before that I wrote historical romances but switched genres when I needed a fresh start.

Why male/male? Because it’s been one of my favorite genres to read.

There are all types of wonderful gay fiction from murder mysteries to westerns and everything in between. I have some favorites that are keepers. I read them when I want to be immersed in a story with characters I care about. Here’s a short list of very diverse books, including Japanese yaoi or Boy’s Love comics.

Snowball in Hell by Josh Lanyon. I love the 1940’s setting and the mystery set in Los Angeles. Also the troubled reporter fighting his demons and falling in love. I’m hoping for a sequel someday soon.
The Broken Road by Sean Michael. Best friends discover that sometimes there’s no place like home and in the arms of the person who knows and loves you best.

Wicked Gentleman by Ginn Hale. This is a wickedly wonderful gothic fairy tale and I’m jealous I didn’t write it!

The God Box by Alex Sanchez. Coming out story. The young man must come to terms with his sexual orientation, religion and his belief in God.

Future Lovers by Saika Kunieda – Mismatched lovers in a hilarious but heartfelt romance.
Kizuna by Kazuma Kodaka. A classic yaoi of best friends in love.
Butterfly of a Distant Day by Tooko Miyagi. This is a tale of second chance at love.
Shout Out Loud by Satosumi Takaguchi. It’s about a father and son and a cast of voice actors, a five volume series that is entertaining up to the final page.

This is a partial list and it’s always evolving and changing. If you’ve never tried m/m before, take a chance on one of these great books!

You can find all of Viki's books at the following sites:


Amazon, All Romance Ebooks and GLBT Bookshelf. Thou shall not kill.

For archangel Razi-el, he had no choice. He would break God’s commandment again if it were to save Uri-el from a demon’s talons. Yet even God’s most trusted archangel cannot avoid punishment. No longer Razi-el, he is now Izar, a Protector sworn to kill for the angels.

When a Protector kills an angel, Izar is summoned to work alongside Uri-el to capture the killer. Izar is shocked when his bloodlust spikes hot for the archangel. He knows better than to go after forbidden fruit. Refusing to give in to temptation, he ignores his body’s tempestuous arousal for Uri-el until a heated argument turns his blood into molten lust.

As they rush to find the killer, their passion plays into the demon’s plan. Izar will have to make a choice between life and death if he is to save Uri-el again.

Today on Ravencraft's Romance Realm I’m featuring the Preppers Romance series from Decadent Publishing. Along with an in-depth overview from the publisher, there are short snapshots from five authors. At the end of the article, you’ll find information on how to submit to this line.

Want more? All right! What do you think of this concept? Leave a comment with a valid email address and I’ll personally enter you into a contest to win your choice of a Prepper Romance. (That means I’m buying! A name will be randomly drawn on Friday, May 3.)

Posted by Louisa Bacio at 2:16 AM No comments: 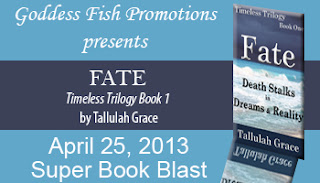