Escaping from the Corporate World with Cathy Yardley


Before I was a full time writer, I worked forty hours a week as an administrative assistant turned budget analyst. (Which is hard to type without laughing: at the time I was the last person anyone would ever think of as organized or financially minded.)

I'd started as a temp for a huge health insurance/medical provider. It was, initially, just something to pay the bills as I continued to write and publish novels. 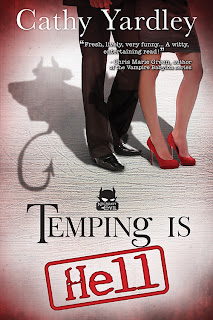 I found myself shifting from “temp” to “perm,” and noticed something strange:  a pattern, that all of us “new hires” seemed to go through.

The first year, you were simply stunned at the way they did things:  “Really?  You’re going to make me fill out forms in quadruplicate?  Just to order lunch?  Really?”

The next year, you were angry: “If I have to fill out lunch order forms in quadruplicate one more time, I’m going to stab someone with a spork!”

The third year, you started to find things funny: “Apparently IRS auditors and a team of NASA scientists can’t fill out our lunch order forms.  They tried to get chicken salad and wound up getting a nuclear warhead with a side of coleslaw.”  Or: “You should see what we need to fill out to buy toilet paper.”

By the fourth year, you found yourself saying to new people: "That’s just the way we do things.  It’s kind of nuts, but there’s a reason and – look, here’s an easier way, okay?  Put the spork down.”

Through the course of those crazy years, I'd look around and think, "I'm going to write a book about this someday."

Temping Is Hell is born.

It took me about five years to finally crystallize the office idea into my Necessary Evil series, starting with the first novel, TEMPING IS HELL.

I pitched it as “Buffy the Vampire Slayer meets The Office,” and my agent was intrigued, if somewhat skeptical. Urban Fantasy was on the way out: over-cataloging was making it a tough sell.

Beyond that, my book wasn't like the usual kick-butt heroines in leather bustiers. She didn't have supernatural powers, unless you considered a gift for filing and administration paranormal.

It was comedic where most Urban Fantasies coming out were dark. It was an ensemble piece where most romances would focus on the hero and heroine. It had a hint of mystery, a lot of world building, and a ton of fun.

We shopped it to all the big six, and several small presses. The same feedback kept cropping up.
We love the voice, they'd say. We just have no idea how to sell this.

Initially, I was stunned.

I loved this book so much.  How could it not find a home?  Even my agent was taken aback: she was certain we’d “place” it, and sounded more and more at sea as rejections started tumbling in.

Then, I was angry.

All right, it wouldn’t be an easy sell, perhaps.  It was a little different, a bit of an underdog.  But I also knew that it could find an audience with any fan of Joss Whedon stories who liked a good dose of comedy with their paranormal adventure, or anyone who’d spent some time in a corporate “cube farm” and liked paranormal romance.  I’d even do most of the legwork and marketing, if they’d just give me a chance.

Once I let that die down, I realized the absurdity.  I’ve been writing and publishing novels for fourteen years, and I knew exactly how it worked.  If I’d hit with this book earlier, maybe when MaryJanice Davidson’s Undead series first came out, odds are good they’d have snapped it up.

It was just a timing thing, truly nothing personal.

Getting past the initial sting, the fact that there were all these editors out there, secretly enjoying my book while still unable to make an offer on it, was actually encouraging.

The fourth stage:  putting down the spork.

Once I stopped looking at the rejections, I was able to look at the opportunities.

I was incredibly fortunate to hook up with Entangled Publishing as they got their wildly successful hybrid publishing company off the launchpad.  They not only loved the book, they were all in, completely supportive.

Just like that, I found not only a home, but the best possible press I could’ve signed with, an editor I love working with, and a support team that is frankly awesome.

It’s a weird business.
It’s crazy.  It’s feast or famine.  There are a lot of highs and lows.
That said…it beats the heck out of lunch forms in quadruplicate.  J

WORST. JOB. EVER.
Kate O’Hara can’t wait until this temp assignment is over. The woman who hired her is a psychotic pageant queen, her coworkers are convicts-turned-clerks, and it’s so boringly corporate it makes her skin crawl. Even her sexy-as-sin boss, famed billionaire Thomas Kestrel, isn’t enticement enough to keep her there. Once she makes enough to pay off her bills, she’s out. Or so she thinks…

WHAT THE HELL?
Next thing she knows, she’s accidentally signed over her soul. Literally. And she’s discovered Thomas’s real mission: to kill thirteen bad guys in one year, in order to get his—now his and Kate’s—souls back.

IT’S NOT JUST A JOB. IT’S A MISADVENTURE.
From learning to boost the morale of some paper-pushing demons to navigating her way through blood-red tape, Kate has to work closely with her super-hot supervisor and get her flaky act together, before somebody clocks her out— permanently!


Available to buy from:
Amazon:  http://amzn.to/13SzAoH
Barnes & Noble:  http://bit.ly/YXOCp4
Add to your Goodreads list:  http://www.goodreads.com/book/show/15103461-temping-is-hell
About the Author: 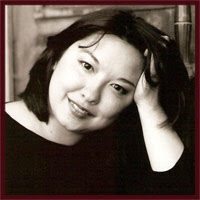 After years in the corporate world, Cathy Yardley managed to tunnel her way out of her cubicle with a spoon she'd stolen from the break room. She now writes urban fantasy and romance, and celebrates her freedom from the cube farm in an undisclosed location somewhere near Seattle, WA.

Read an excerpt at the author site!  http://www.tempingishell.com