My Heartache Cowboy by Z.A. Maxfield 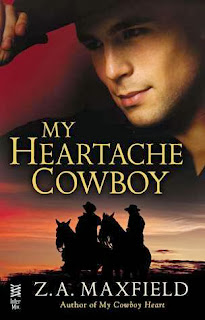 My Heartache Cowboy
(Cowboy Series, Bk #2) By Z.A. Maxfield
Blurb:
Can love conquer all? Jimmy Rafferty and Eddie Molina go way back at the J-Bar ranch. They’ve worked together, bunked together, camped out, and drank together. So how has Jimmy failed to notice that Eddie is gay? Eddie has not failed to notice that his friend has a serious drinking problem, and he’s determined to help Jimmy kick the booze cold turkey. Taking him up to a snowbound cabin to detox, Eddie is confronted with Jimmy’s fierce denial. But the pains of withdrawal are nothing for Jimmy compared with the heartache of denying his true feelings and his deep longing…for the one man who cares for him more than anyone else on earth.

Available for purchase at

When I woke, I was alone and the truck wasn’t moving.

Who the hell did Eddie think he was, leaving me asleep by myself in a truck outside in the freezing cold? My pa and my older brother, Jonas, used to do that. We’d be on the road, and when I fell asleep, they’d leave me in the parking lot of some dive bar or motel—just leave me asleep outside in the dark. I’d wake up with no clue where I was, no idea if they were coming back or if I should go in and try to find them.

My first useful thought was to look for the keys, because I hadn’t forgotten what Eddie said. I hadn’t forgotten the plans him and boss Malloy made for me behind my back. It would serve them right if I up and hightailed it back to the J-Bar with Eddie’s truck and no Eddie.

Not like that was going to stop me. Where the hell did Eddie get the idea I’d go quietly? I slid over and tore the wiring out from under the dash. Found what I needed without hardly even looking. I hated waking up alone like that. Unwanted. Abandoned.

One twist. Two. Touch the wires together and the engine should . . .

What the hell? I checked I got the proper color-coated strands and tried again. I was frowning down at the mess of tangled wire when someone tapped on the window behind me.

I glanced up and saw Eddie frowning down, no doubt pissed at what I’d done to his truck. Serves you right for leaving me like that, you prick.

“You need a working engine for that,” he told me as he opened the door. “One that has a battery.”

“Fuck you.” I spilled out of the car ready for a fistfight.

“What?” Eddie jumped back.

“Why did you have to leave me like that? What did I ever do to you?”

Eddie shook his head at me. “I don’t have a clue what you’re talking about. You were sound asleep and I thought maybe you needed it.”

I took a swing at him. “I hate waking up alone in a car like that.” Ed plucked my fist from the air and peered at me like he was trying to see through my skin.

“I hate that. Left behind in the car like a damn dog. Like a fucking duffel bag. You can’t be bothered to even wake me up and take me in out of the fucking snow.”

Now Eddie frowned like he was thinking about it. Now, after the fact. “I’m sorry, Jimmy. I didn’t think how you’d feel waking up alone like that. I won’t do it again.”

“It’s pretty civilized inside. How about you come in with me.”

“How about you suck my fucking—”

“That’s enough.” He turned and headed toward the cabin’s welcoming front door. “I almost didn’t bother to disable the damn thing, but I thought on the off chance you knew what you were doing and could—”

“Come inside.” He jerked his chin toward the cabin like I was a dog and I was supposed to just follow along and yip around at his heels.

I debated making a run at him, but frankly, Eddie was a tough buzzard. He wasn’t too much older than me, just forty-two compared to my thirty-eight. But I was a lover, not a fighter, or at least that’s how I thought of myself. Back there on the road, Eddie had proved he wasn’t above using violence to get his way in this, so I went along.

You’re going to have to sleep sometime.

Eddie led me into a rustic-looking cabin that seemed awful nice for the middle of nowhere. There was a place for us to hang our hats just inside the door, over a table with a passel of pictures on it. There were old time black-and-whites of families and framed pictures of a good-looking man, a pretty woman, and some kids. There were some of the kids alone, and holy cow, there were probably a dozen pictures of Ed. He looked so young in a couple of them, they must have been from before we met.

One of Ed and the unknown man caught my eye. Something about the difference in height, the casual way they leaned together, the way they looked at each other, made me think this was Ed’s friend from the road, Don. Even though they’d both aged some since it was taken, I was almost sure of it.

No knobby hands, no weathered angel, this Don was good looking, without a doubt. He was lanky and chiseled. He had an intelligent face and a smile that drew the eye. He seemed sure of himself and charming. Whatever I’d seen in the darkness outside the car had to be a trick of the light.

Ed looked so young and earnest next to him it took my breath away. Brawny and tan, he wore a yoked Western shirt with the sleeves rolled up past well-muscled forearms and he eyed Don like he would follow him anywhere.

Hadn’t I seen firsthand how much he did appreciate him?

Z. A. Maxfield started writing in 2007 on a dare from her children and never looked back. Pathologically disorganized, and perennially optimistic, she writes as much as she can, reads as much as she dares, and enjoys her time with family and friends. Three things reverberate throughout all her stories: Unconditional love, redemption, and the belief that miracles happen when we least expect them.If anyone asks her how a wife and mother of four can find time for a writing career, she’ll answer, “It’s amazing what you can accomplish if you give up housework.”

You can find ZA Maxfield at

Giveaway
a Rafflecopter giveaway
Posted by Louisa Bacio at 9:10 AM