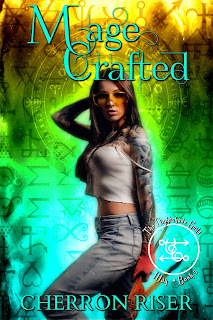 Charlotte “Charlie” Nocker had always dreamed of working for the council. She just did not think the day would come before she had barely reached adulthood. However, once she had been summoned as one of twelve mages tasked to protect the Elven Princess Ameria, Charlie knew it was time to grow up and prove herself. Now she had to divide her time between her toddler charge and being one of the best crafters in the country.

Benjamin “B” Logan spent most of his nights working as a bouncer at the Smoking Cauldron, a popular bar and secrete mage hotspot. When his boss asks him to have an old artifact looked at, B is more than happy to take a few days away from the city, and the memories that came with it, to take it for repairs. However, he had no idea the importance of the artifact in question, and, in order to get it fixed, meant putting himself in a position to not only save his own hide but that of the young artificer and her toddler charge.

What started out as a normal job soon became a fight for survival. Neither of them expected others were looking for the artifact and were now in charge of the protection two precious possessions. With assassins coming from every angle, all Charlie and B know is the only way to survive and keep the Princess safe is to come together.

Ready to get MAGE CRAFTED?

With assassins coming from every angle, all Charlie and B know is the only way to survive and keep the Princess safe is to come together.