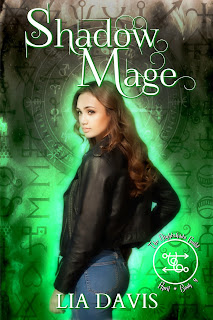 Jemma Blackwood, shadow mage, is honored to be one of the twelve mages charged with protecting the Elven Princess Ameria. The sweet, magical baby is easy to love, but Jemma never thought she would be a mother, let alone obligated to protect a little one with her life. And as if serving as guardian to the princess wasn't unexpected enough, the child's safety brings the man who broke Jemma's heart back into her life abruptly.

Willing to do anything to protect his mate, Niam Cane disobeys his own queen to save Jemma and the elfin princess in her care. But getting Jemma to trust him proves to be a greater challenge than he anticipates since the beautiful mage believes he betrayed her years ago. But he’s Jemma’s only hope for survival. As the right hand of the dark fae queen will stop at nothing to find Jemma and Princess Ameria, Niam must convince his love to take the baby and run.

As they evade the constant threat together and work as a team to keep Ameria safe from harm, can Jemma and Niam fight their entangled past and the explosive attraction they feel toward one another?

Available free via Kindle Unlimited and now on Amazon