Your mentality has a lot to do with your belief in ghosts, according to today's guest author Landra Graf. What does she regret not doing? 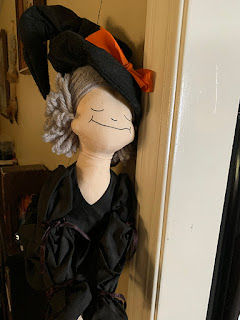 Usually the first weekend in October, but we really have to feel the mood. This year rain has kept us from putting up the decorations just yet. And I still need to find a good place to hang my witch. 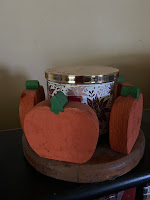 I have two. 1 - A witch, she hangs from the ceiling and was my grandmother's. She has been passed on to me. 2 - the candle holder. Fall signals my time to start lighting candles. I have a candle holder (also passed down from grandmother) that has wooden inserts themed to each month. It's pumpkin time witches. Last year we started adding inflatables and I have not one, but two Baby Yoda's for the yard. I'll share some pics.

Yes, several. But the easiest one to explain is when I awoke one night to a ghost standing next to my bed. You don't see them always with your eyes, but inner eyes (believe whatever you want). The ghost just stood there until she realized I could 'see' her. Then she was in my face wanting to talk. I'll admit I was too scared to do such a thing, and squeezed my eyes shut hoping she would leave. I regret not talking to her.

Plenty, but I truly accept the “what you believe, is your reality mentality.” So if you don't want to know who’s bumping, don't believe in it.

When the hunter becomes the hunted…

For the past five years Demi Mephisto has hunted the demons who injured her mother and forced her to take her mother’s place in the Nightshade Guild. A position of honor she expected to require minimal involvement, until now.

As one of the mages sworn to protect the Elven Princess Ameria, Demi bonds immediately with the youngster over a shared loss of parents. The only problem is the demons she tracked are now after her and her charge. To keep the princess safe, she may have to turn to the last person she should even ask, her ex.

An unwelcome surprise on her doorstep…

Adrian Thorn isn’t the most traditional vampire, but when the vampiric queen tasks him with an assignment he’s blood bound to do as she commands. Leading him straight to the one woman he swore he’d never get involved with again. Demi needs his help to protect a little girl from the very demons she’s hunted for years.

To save the world…

With enemies on all sides, Demi’s not sure she should trust Adrian completely, but the princess does. When forced proximity brings back old feelings, battling dark enemies won’t be the only things Demi and Adrian have to fight against. Especially when Adrian’s true mission endangers the princess she’s swore to protect.

Available free on Kindle Unlimited and via Amazon.