Cassidy K. O'Connor kicks off our official author interviews for 31 Days of Magic & Mayhem. Do you look outside the blinds when you hear something go bump? 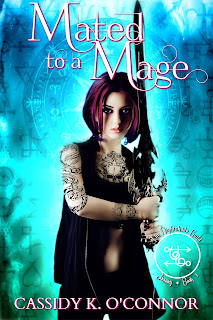 Normally on October 1st but I'll do earlier if I really feel like I need the mood boost.

My grandmother has lived in the same house since 1960. We trick or treated there when we were kids, and all of our kids did too. I hope their kids will too.

When I was young we often thought my bedroom was haunted. I would ball my bed sheet up in the center of the bed then we'd watch it move across the bed and off. My family witnessed it as well so I knew I wasn't crazy :)

Absolutely everything we can imagine bumping in the night most definitely does. I am not embarrassed to admit I'm afraid of the dark! You could not pay me to open the blinds at night and look outside.

Available free via KU and for sale via Amazon