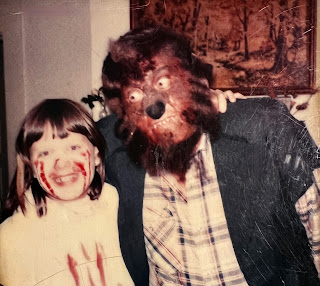 Midnight, September 1, Andromeda (my youngest) came to me and asked when we could start decorating. This year, with so much going on, we were late getting started and we didn't put everything up. It's still quite Halloweeny--it honestly doesn't take much inside the house since we are kinda Gothic-y anyway. We've never done gory stuff--but it's cool to see all the houses around with different styles. Halloween is the best!

I thought I was so clever to dress up as Stephen King's "Carrie" (since I'm "Kerry") when I was 11. It was a cheap costume--basically a "dress" and fake blood. I'd read the book and had seen ads for the movie--but hadn't been allowed to see it. I'm sure my mom was relieved about the cheap costume! The same year, my uncle dressed up as the Wolfman--he glued fur all over his face from some kit. It wouldn't come off and he had bits of brown fuzz on his face for what seemed a long time (probably was only a couple days, lol). He definitely suffered for his art, but I thought it was an awesome costume!

So many experiences! Once, I was with my family in Charleston and we were asleep in a hotel. I felt a cat jump on the bed (not an unusual experience at home--but we had no cats at the hotel!). I realized there were no cats and I sat up to see what was going on--and at the same time my daughter Ana sat up in the other bed and said something to the effect of "I felt a cat jump up here." She's still a little freaked out about it and it was maybe 10 years ago.

There is also a black cat who roams our house--usually just disappearing around the corner or I'll spot out of the corner of my eye. We've had three black cats since we moved here, but don't have one now. Oddly, I'll see the cat either right before or after we have a cat cross the rainbow bridge. Both Ana and Andi have seen the cat, too. I don't really know if it is the ghost of our first cat here (Neuromancer, who lived to almost 19 and passed while we lived here), or another cat or a representation of all the cats we've loved and lost while living in this house. 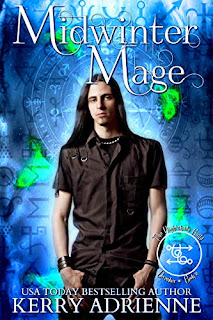 A serious and visionary talent, Arion has no time for toddlers. But as part of the Nightshade Guild, he won’t refuse the council’s call to protect the orphaned Princess Ameria. As winter solstice approaches, this leather-clad magical musician becomes her twelfth temporary guardian despite the fact that he doesn’t have a full grasp of his own powers or any experience changing diapers.

Protecting a pint-sized princess leaves very little time for promoting his alt-rock music and touring the indie club scene throughout Europe. And it seems the only gift he has for babysitting is entertaining little Ameria with his musical spells and charms. Though it's good fun for her and great practice for him, he's desperate for his month to be over, and none too happy when a groupie named Liv insists she can help. He’s not one to trust, but Liv slides right into his life, almost like she belongs. And that bothers him.

Can they work together to finally end the princess’s long year on the run? Or will December be the month the world loses a kingdom?

Grab your copy Dec. 9 on Amazon.