She Devil with Melissa Kendall 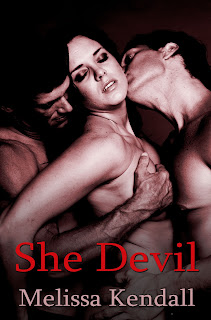 Warning: I don't normally feature adult excerpts, but the one Melissa provided is on fire! 18+ only, please!

Constance is a Vampire with a heavy appetite, who works as a stripper to find her meals. She is wanton, luscious and wicked—she craves more than just blood.

Benjamin and Jonathon are vampire outcasts who exist by pretending to be as human as possible in order to remain hidden among humanity. When the town they live in starts to report that men are disappearing? They go on the hunt for the Vampire intruder.

Little do they know, the Intruder is one sexy-delicious Vamp. Connie will offer them more than just a hunt… she will pull them into a tryst of sensual heat and naughty thrills.

Melissa is a 37-year-old stay at home mum and part-time Software Support Consultant. She lives in Perth, Western Australia, the most isolated capital city in the world.

She’s always loved to read and write and spent most of her teens scribbling poetry and short stories on any scrap of paper she could get her hands on. Over the years as daily life pressures got in the way, she lost the passion for it. After her son was born, she discovered online books and her interest in writing was rekindled. It has been a large part of her life ever since.

The grin that spread over his face made him look like he’d won the lotto. “Well, let’s get it on then!”
Classless fucking hick. Starving, she led him into the house and straight up to her bedroom.
“So, what now?” he queried.
“Why don’t you get naked while I freshen up?” She didn’t need to get clean, but she liked to get her meals worked up before she fed. She found the anticipation of what she might be doing in the bathroom, increased the hormones, pumping through their system. It made the feed tastier.
A few minutes later, she came back into the bedroom.
Blake stood at the end of the bed, naked as requested.
One look at his tiny little pin dick confirmed her suspicions. No fucking tonight. She then swiftly closed the distance between them.
He looked freaked out. “Wow, what’s wrong with your eyes—they’re black?”
“Oh, they’re just contacts. Cool aren’t they?” All the better to see you die with.
“If you say so.” He sounded doubtful. “Now bring your sexy ass over here, so I can show you how a real man fucks.”
Connie couldn’t contain her chuckle. Like you know how a real man does anything. However, she did as he demanded, making it quicker and easier to help her achieve her goal with a minimum of fuss. Inches away from his body, she gave him a nudge, knocking him down onto the bed.
“Oh yeah, come to papa, baby.”
Oh, lord will you stop with the cheesy fucking lines? She crawled over him, noticing for the first time how disgusting he smelled. His blood reeked of liquor and she regretted her decision of picking him to feed on. Regardless, she needed to drink.
Keeping up the charade that she’d be having sex with him, she rubbed her body against his, her pussy sliding right over his little dick.
“Oh yeah, sexy—rub all up on me.”
Connie looked forward to sinking her teeth into him, if only to shut him up.
Seconds from biting into the douche bag, she heard a noise from the stairs. Someone’s in my house. All her senses on alert, she listened hard to all the various sounds concentrating on identifying the intruder. The moment she caught the person’s scent, her whole body went rigid. A vampire?
She took a defensive position over Blake, expecting at any moment for the intruder to come flying at her, to steal her meal. Her initial instinct was to growl and tell them to fuck off. She waited, and the non-bloodlust part of her brain kicked in, telling her there was no danger. She figured whoever watched them must be enjoying the show, as they hadn’t tried to intervene.
Let’s make this a little more interesting. Slowly, she removed her clothes, giving the voyeur a display they’d never forget.
She tuned out Blake’s pathetic dirty talk, because he had nothing to do with the arousal coursing through her body. Connie needed a little relief for the ache between her legs. She knew Blake’s ineptness and selfish ways, along with his laughable excuse for a cock wouldn’t bring her any. Reaching between her legs, she inserted three fingers into her pussy as she let her bloodlust take over.
Posted by Louisa Bacio at 12:00 AM