A Double Bill by Lucy Felthouse

Lucy Felthouse is such a favorite writer-friend of mine! And talk about prolific HOT stories. Here's a little bit about her latest.

There’s a British saying about buses – you don’t get one for ages, then three come along at once. My new releases seem to be like that. I have two new releases—three if you count an appearance in an anthology—and I’m here to dish the dirt about them a little. 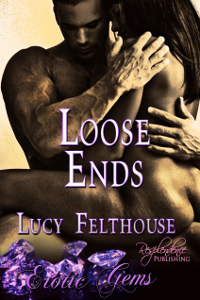 Both books released on exactly the same day, which made things a little crazy, but I’m certainly not complaining—at least I can do all my promo in one go! The books are called Loose Ends and The Military Wife. Loose Ends is an erotic romance short story about two people who knew each other at University, but for various reasons never got it together. They meet several years later at a reunion and the spark is still there. The things that kept them apart are no longer there... so will they finally get together? You’ll just have to wait and see! This book is actually a re-release as I got the rights back from the original publisher, and was lucky enough to have Resplendence Publishing sign it, re-edit it, and give it a lovely new cover.

The Military Wife is a collection of three erotic romance short stories, all with a military theme, as you may have guessed from the title! The first story, The Military Wife, is about a woman whose husband is away on tour with the Army, and naturally she misses him. When he comes home unexpectedly, they have a very enthusiastic reunion. Passing Out Passion is the story of what happens when a girl goes to her brother’s passing out parade (which is what we call it in the UK when recruits pass their basic training) and bumps in to an old flame. They didn’t part on good terms and things are weird between them. Will they get a second chance? Finally, Double Vision is a rather kinky story about what happens when an army wife confesses to her husband something she’d particularly like to do in the bedroom. Her request breaks unwritten rules between the two of them, but her husband is eager to please and tries to work out a way to give his wife what she wants.

Also, just in case you’re interested in the anthology I had a story in – my quirky bondage story, Balancing the Books, appeared in The Big Book of Bondage by Alison Tyler. It’s one of my favourite stories that I’ve written and I was delighted to make my first sale to Alison Tyler!

Thanks so much to everyone for stopping by, and if you want to find out about my upcoming releases, sign up to my newsletter, subscribe to my website and follow me on the various social networks and I’ll keep you up to date J

Thanks also to Louisa for letting me loose on her site today!

*****
When Jonathan and Lauren met at University, it should have been the beginning of a beautiful relationship. Sadly, it wasn’t to be, and Jonathan became ‘the one that got away.’ Years later, at a University reunion, Jonathan shows up unexpectedly throwing Lauren into turmoil. The pair start talking, and soon all the old feelings come back. But will this time be different, or will their mutual affection continue to be unrequited? 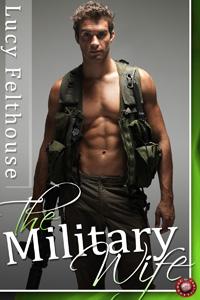 The Military Wife
Tess’ salacious fantasies about her husband, Aidan, see her through the long periods of time when she doesn’t see him—when he’s away on tour with the Army. The rest of the time, she has to deal with day to day life alone. One day, a dull chore is interrupted by the unexpected arrival of her husband, and things quickly hot up in their kitchen, and beyond.

Passing Out Passion
When Christina attends her brother’s passing out parade with her parents, she’s full of pride at his achievement. What she’s not expecting, though, is to bump into old flame Phil Ashdown. They didn’t part on good terms and the atmosphere between them is awkward. But when they’re forced into conversation, it turns out that all those years ago, there was a misunderstanding. One that can very easily be put right.

Double Vision
Becky’s a military wife with a uniform fetish. She loves nothing more than having fun in the bedroom with her squaddie husband, where they share and act out many of their fantasies. However, there’s one fantasy that she’s never divulged, as it breaks their rule about bring other people into their sex life. One day, though, Becky decides to bite the bullet and tell Paul everything. She never expects him to make her fantasy come true. But then, Paul’s a very resourceful man.