How To Woo… A Reluctant Bride with Lyndi Lamont 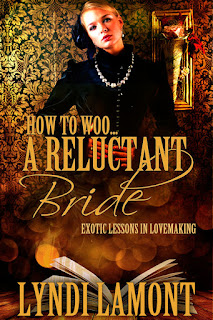 The creativity and generosity of Lyndi Lamont continues to amaze me. Sometimes you meet a person, and click! I'm thrilled to have her here today, sharing her sexy romantic historical.

My thanks to Louisa Bacio for inviting me to visit here at the Love Knows No Bounds blog. I had the pleasure of working with Louisa on our RWA chapter’s romance anthology, Romancing the Pages, which never would have seen the light of day without Louisa’s guiding hand. She’s one of the most organized people I know and I keep hoping some of it will rub off on me!

My newest release is the reissue of my Victorian short story, How To Woo… A Reluctant Bride, in which Victorian sensibilities collide with the sensual wisdom of the Kama Sutra. This was a fun story to write and to research, since I did, indeed, have to read the above-mentioned sex manual. It seemed the perfect way to spice up an arranged Victorian marriage.

The blurb and excerpt are below. I’m currently participating in the Something New, Something Naughty Blog Hop, which goes from January 10-13. If you are interested, head over to my blog, Lyndi’s Love Notes, and leave a comment to enter my giveaway for a $10.00 gift card of the winner’s choice. And to check out blog hop central for a chance at winning the Grand Prizes.

A marriage contract, nothing more...until darkly handsome Evan Channing and demure Lydia Blatchford meet. Yet the rules are simple for an arrangement such as theirs. There should be no misunderstanding, no illusions of anything more.

But the rules are about to change when Evan is gifted with an intriguing copy of the Kama Sutra.  He sets out to win his high-born bride, blending seductive heat with exotic lessons in lovemaking. With a little help from Sir Richard Burton's new, provocative translation of ancient wisdom on seduction and arousal, the cold marriage bed of an arranged union is about to combust into a blazing flame of desire

(Previously published under the title Love… By the Book)

4 Angels...” a scintillating mix of lust and sexual exploration… Ms. Lamont has done a very nice job of bringing a bit of the exotic into her writing.” - Dawnie, Fallen Angel Reviews

All through dinner, she was aware of his presence at her side. His quick smile, pleasant manners, his long, long fingers that occasionally brushed her hand. Then there was his deep voice murmuring in her ear during the meal. It mattered not what he said, the very sound of his voice sent alternate waves of heat and cold through her. She was barely been able to eat a bite, though she’d drained her wineglass more than once before the champagne toast was served. She drank that as well.

Now, feeling a bit woolly-headed, she walked out onto the balcony for some fresh air where a slight breeze cooled her heated face. The men were still having their port in the dining room while her mother and Phoebe sat and visited with Mrs. Channing. Lydia knew she should go back inside and converse with her future mother-in-law.

Lydia was eager to learn more about Evan’s childhood. She knew his father had died when he was a babe in arms, murdered during the Sepoy Uprising, and that Mrs. Channing’s Indian in-laws had protected her and the infant Evan from a similar fate. She must have loved her husband greatly, for she had never remarried.

It was a tale worthy of one of her favorite romance novels, but she wasn’t in the mood to be sociable. Thank heavens it was a small gathering, just her immediate family, Evan, his mother and his uncle Frederick. She’d never have been able to deal with a crowd tonight.

When the men entered the room, her gaze flew to Evan. He looked around the room, frowning, until he spotted her standing by the open door. A smile creased his face as he headed straight for her. She clutched the doorjamb as her heart started pounding.

“There you are,” he said, stopping in front of her. “I feared you’d left.”

“I just needed some fresh air,” she explained.

“Are you well?” he asked, taking her hand solicitously. Heat radiated from him, shooting up her arm.

“I am, too,” he said, guiding her to the railing looking over the small garden at the back of the house. The scent of roses and honeysuckle wafted up.

“Since our engagement is official, I’ll send the announcement to the Times tomorrow, and then speak to the vicar about having the banns read. Shall we set a date now?”

She stiffened, staring straight ahead. Official. The word pounded in her head. Once the announcement was published, there would be no backing out. She closed her eyes, not knowing what to say.

Gently, he grasped her chin and turned her head toward his.

When she looked up, his expression was concerned.

Everything. But she could not say so. In truth, she was afraid of the weeks to come. Of what this marriage would mean.

How it would change her life.

He moved his hand to her shoulder. “Are you apprehensive?”

She managed a jerky nod.

She stared at him in astonishment. “Truly?”

“Truly. This is a big step for both of us. I realize we don’t know each other very well. If you’d like a long engagement–“

Taking a step back, she spread her hands. “It will just give me more time to dread–“

She broke off at the injured look on his face. “Forgive me, but surely you understand this marriage was never my preference.”

He turned away from her and ran a hand through his hair.

“Yes, I know, but I hoped you had become resigned to it.”

“I have. At least I have tried to be,” she said, the words tumbling out of her mouth. “That’s why I think it best just to plunge ahead. Once the banns have been read thrice, we can wed almost immediately.”

He turned back, a frown still marring his forehead. “Will that give your mother enough time to plan?”

She shrugged. “All I need is a new gown.”

“But won’t society think it odd we married in such haste?”

She looked him in the eye. “Let me make one thing clear. I do not give a fig for what society thinks. If you supposed you were marrying a social butterfly, let me banish that notion right now.”

He smiled at her. “Harry said you were sensible, but this surprises me. I’m happy to agree to a short engagement.” He stepped closer, towering over her. “The sooner I can make you mine, the better.”

Her heart pounded and her breath caught as he lowered his head and touched his lips to hers for but a second before backing away. She drew in a deep breath. Her first kiss and it had been over almost before it was begun. She didn’t know whether to be relieved or disappointed.

“Shall we go inside and discuss the wedding plans with your parents?”

“Not yet. There is something else I’d like to say.” It was now or never.

She licked her lips then plunged ahead. “I know how these things work. Arranged marriages, that is. I won’t expect fidelity from you.”

His shocked expression surprised her. “Is that what you think, Lydia? That I’m marrying you with the intention of cheating on you?”

“Perhaps not now,” she said. “But in a few years… It’s not as if ours is a love match. I won’t cut up a fuss if you decide to take a mistress. As long as you are discreet.”

“How very... sophisticated of you,” he said, his tone dry enough to parch a desert.

She took a deep breath before continuing. “And once I’ve produced the requisite heir and spare, I assume I’ll be free to seek my pleasure elsewhere.”

The thunderous look on his face startled her and she stepped back.

“You will do no such thing,” he said fiercely, reaching for her.

“Ours may not be a love match now, but I fully intend to see it turns into one.”

With that, he pulled her into his embrace, trapping her arms between them as his encircled her shoulders and waist.

Covering her mouth with his, he kissed her with a heady combination of passion and anger. Her resistance crumbled in the face of his onslaught. She clutched at his lapels and returned his kiss, even parting her lips when his tongue probed them. Overwhelmed by the sensations his lips provoked, she let her eyes drift shut as she clung to him.

When he let her go, he was still visibly upset. “There will be no more talk of infidelity. Have I made myself clear, Lydia?”

Lyndi Lamont
http://www.lyndilamont.com/blog
https://twitter.com/LyndiLamont
Posted by Louisa Bacio at 12:00 AM