The Lure of the Dark with Anne Brooke

Today, we welcome Anne Brooke with her m/m book, The Heart's Greater Silence. Anne's hosting a few contests as part of her book release tour. See below for details!

I don’t know about you but there’s just something about dangerous men with dark secrets that draws me every time. Not so much in my real romantic life, as I like to think I have my head well and truly screwed on (as it were) – though that alluring glint in my husband’s eye is surely the exception that proves the rule!
Not, it’s in my writing life where I absolutely can’t resist a hint – well, okay, more than a hint – of danger. Ah yes, because difficult men are always the ones who make my fingers well and truly fly over the keyboard. Give me a past trauma and I’m smiling. Raise the possibility of thwarted love and obsession, and I start to dance. Talk to me about overwhelming tension and the immediate threat of death, and I’ll crack open the champagne.
Am I really that odd? Wouldn’t I prefer to write a light-hearted romance where everything is sunshine and roses? Um, well, no. Thank you. I’m not sure I’d know how. Even when I do go for a comic romance or two, I can’t help focusing on issues of betrayal, split families, thwarted love, hatred, envy and the possible ramifications of drugs. In a jolly manner, of course. Say no more …
Call it a misspent youth or a way to live a life and experience highs and lows not necessarily my own, but my favourite characters to write about are the ones with a high proportion of the dark in their psychological make-up. And my favourite themes are love and obsession, sex and death. Because I think that when I explore the dark side in my fiction, I also shine a light on issues in my own life, both past and present. In this sense, writing becomes – almost – a creative form of therapy in which I can face my own demons by bringing them out into the open and acknowledging their truth via the use of fiction. Well, it works for me anyway, and I also hope it works – to some extent or other – in the mind of the reader.
In this sense, both writing and reading the “difficult” stuff becomes a kind of catharsis where both writer and reader can discover more about themselves and, in the process, become more fully human and more fully alive. We are, after all, the only animals on the planet who read.
To get you more fully into that dark side, here’s an extract from my latest gay story, The Heart’s Greater Silence, where my protagonist, Mark, has some difficult choices to face in terms of his relationships with two very different men: 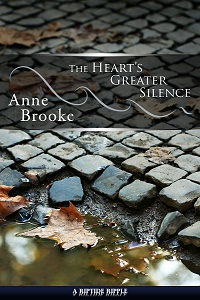 As usual, I chose a seat at the back of the church, out of immediate view. It was where I felt safest. I preferred to watch rather than take part. In matters of religion, it was what I was best at.
I was just about to close my eyes, which was the nearest I ever came to prayer, when a slight movement at my shoulder almost made me jump. Richard was standing next to me, his clerical cross drawing my gaze. I didn’t know how long he’d been there as I’d not been paying attention, but he nodded when I noticed him.
“Mark.”
“Richard.” I nodded back, swallowing. I wondered if he’d talk to me, but he simply smiled and continued to walk down the aisle towards the altar. I watched him go, his slight black-clad figure creating its own shadows in the dark and light of the church. He disappeared into the vestry, and I closed my eyes.
I didn’t know how long I sat there, doing and feeling nothing, but when I finally opened my eyes, all my questions remained.
Candles had been left on the side table near the altar. Two of them were lit and I wondered who’d put them there, if it had been Richard. I shook my head, suddenly afraid of how much it mattered that I knew. Sitting back and looking up at the decorated ceiling, I took a deep breath, wiped the back of my hand over my lips, and stood. The creaking of the pew might have woken the dead, if I believed in that kind of faith.
I should leave now, and I shouldn’t come back. Some things, however powerful, were best left alone. If I had any sense, I’d turn right round, walk out of the church, and head back to Craig’s. I should sit on his doorstep all bloody night, waiting for him to come out so I could beg him to give me another chance.
Still, when I started walking, it was away from the door, not towards it. The shadows and shapes of the church swallowed me up. It felt as if I were entering a land far removed from the familiarity behind me, which was ridiculous as I’d been here a hundred times before. It shouldn’t be this strange, or this lonely.
In front of the side table, I paused and gazed at the candles. They’d been placed slightly apart on the stand, so I reached out and moved them closer together. Some people say every candle is in fact a prayer, but I had no idea if that was true or not. Didn’t even know if I wanted it to be.
Making a decision at last, I swung away from the table, clattered down the steps next to it and entered the vestry. My heart was beating fast and my skin felt way too cold. The sudden burst of light in the small room I found myself in made me blink, and it took a second or two to focus on Richard’s willowy figure sitting in the corner.
“Hello,” he said quietly. “I didn’t think you’d come.”
You can find more information about The Heart’s Greater Silence at Riptide Publishing, where you can see all the details about my ongoing Blog Tour. The tour focuses on a variety of subjects, including favourite songs, the lure of the short story, church life, bullying, and an interview with Mark, to name but a few. If you visit any of the blogs listed, then you will be entered into a competition to win ebooks from my backlist, a gift certificate to spend on Riptide books, and a host of other goodies as well! So do visit and enjoy getting in touch with the dark side for yourself …
Anne’s contest and prizes:
1. I have one contest per stop - with the prize being a backlist ebook giveaway for one commenter.
2. I also have a cumulative competition throughout the blog tour involving answering 3 questions from HGS - with the prize being 3 backlist ebooks for one commenter from the tour as a whole. The questions are
3.  One signed cover flat and magnet for one commenter per stop - with this NOT being the winner of Item 1 (see above)
4. One gift certificate to be drawn at the end of the tour - with this NOT being the winner of Item 2 (see above).