How a Trip to Fort Sumter morphed into SOUTHERN FRIED DRAGON

Joining me today is multi-published author, Nancy Lee Badger, whose latest e-book release, SOUTHERN FRIED DRAGON, is now available. Nancy has promised to explain why she set one of her signature dragon romances in Charleston, South Carolina, on the eve of the American Civil War.
Thanks for having me back as a guest author, Louisa. I am excited to have self-published a book that sprang from a romance…mine! About a year ago, I decided to surprise my husband with a birthday trip to South Carolina. We have only lived in the south a few years and are both historical buffs. Our ancestors have lived in America since the early 1600s and we have recorded several instances where several ancestors fought in wars on American soil. Imagine the thrill of discovering that we lived within hours of several important historical sites. One such site we have always wanted to explore is the place where the Civil war began 150 years ago—Fort Sumter. (See links below)
I went to the internet to research the island and its museum. The busy city of Charleston, South Carolina is steeped in history. Information was easy to come by and we enjoyed the local fare and vistas. The Fort Sumter Museum is on Charleston Harbor and sits next door to the South Carolina Aquarium. Easy parking is located close by in a parking garage. The on-land museum is very informative and includes a gift shop. The ferry to the island leaves from the back of the museum and reservations are strongly suggested. We took the ferry ride on noon on a cold Wednesday in March and the ship was full.
My husband and I enjoyed the view of the harbor, which included the naval base, sailboats, water fowl, and other small land-based forts. Fort Sumter, itself, is impressive. Considering that half the building had been blown away during the conflict I can just imagine what the fort looked like on the eve of battle. We walked along the balustrade, a small grassy slope, and through the remnants of the armory and enlisted men’s quarters. Broken bricks, holes, cannons, and remnants of spent shells were eerie.
I imagined the men firing on the Fort Sumter soldiers from land-based forts that, up until the War Between the States began, were all Federal outposts. The echoes of former men haunted me even after we boarded the ferry for the return trip. Ideas formed and questions sprang up. How can I use this information to create a love story? How can I use the Civil War Sesquicentennial in a story with dragons? My husband has gotten used to me scribbling in my notebook even on vacation!
After we returned home, I began to think of ways to combine my love of Scottish dragons and the Civil War. The story I came up with quickly morphed into SOUTHERN FRIED DRAGON. I hope my readers will look back on the Civil war and remember.
For more information on Fort Sumter and Charleston:
Fort Sumter National Monument http://www.nps.gov/fosu/index.htm
Ferry Service to Fort Sumer http://www.spiritlinecruises.com/sumter_overview.asp
Charleston, SC Welcome Center http://www.charlestoncvb.com/
South Carolina Aquarium  http://scaquarium.org/default.aspx
BOOK BLURB
Amid cannon fire, and the threat of Civil War, love and trust will find a way.
Dru Little flew away from her home in a cave beneath a Scottish Island to end her lonely existence and find companionship across the sea. Her journey in late 1860 has led her to the modern American city of Charleston, South Carolina. Hiding her true self, she takes over the life of a serving girl and enjoys the hard life working in a tavern near the wharves. She has no idea that her life will turn upside down in a dark alley the moment a handsome soldier saves her life.
Lieutenant Shaw Stenhouse has his own worries. Southern secessionists are talking up a storm in Charleston. His fellow Federal soldiers are suddenly at risk from the community they are here to protect. The possibility of civil war takes a backseat when he saves a comely lass from drunken sailors. A good deed and a stolen kiss put a smile on his face until the threat of war becomes a reality. Their instant attraction proves disastrous when Dru spots her former lover, the Black Dragon, working for General Beauregard and the southern troops. As the clandestine group plans their attack on Fort Sumter, and Shaw’s soldiers, she takes to the sky.
Dru fights against the threat of detection, while she fears losing Shaw’s love. What will he do when he finds out that she is a powerful Scottish dragon Hell-bent on carrying him to safety? When Shaw discovers her hiding inside the heavily guarded fortress, thoughts of espionage—and worse—catapult the two lovers into danger from many sides.
When her former lover threatens Shaw, Dru must decide which is more important: protecting another of her kind, now nearly extinct, or protecting the human male, the man she has come to love. 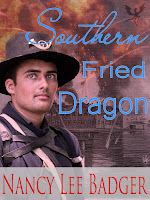 EXCERPT
The thought made her lips tremble, itching to taste him. Not as dinner, of course, but as the human male standing before her. When he gazed down at his feet, then back at her mouth, she’d smiled. The weird longing to kiss him senseless was out-of-place in their situation. She planned to pass through this human existence until something better came along. Dru had no need for sexual entanglements.
Not tonight, anyway.
“I feel I’m a’keepin’ ye from yer duties, sir.”
“If they come back—”
“Fear not, sir. I will not remain outside this night. Where are ye’ headed?”
“Across the harbor, to Fort Moultrie. I am part of the 1st U. S. Artillery regiment. I travel by boat once a week to the Charleston docks for supplies.” He turned and gazed toward the end of the alley facing the harbor. “My men are waiting…”
When he turned back to face her, Dru tossed her loosened hair over one shoulder and couldn’t help giggling when his eyes tracked the movement. “Maggie needs this flour.”
“Maggie?” he croaked, as he stepped closer.
The young man sounded like he needed a stiff drink. Too bad the inn’s dining hall had closed for the night. His scent washed over her anew. Salt, sea, and male. Human male, a new scent she was beginning to like.
SOUTHERN FRIED DRAGON
Author:  Nancy Lee Badger
Genre: Paranormal Historical
Length: 30,000 Word Novella
Amazon ASIN: B0074CX7SE
Buy Link: http://amzn.to/zgv30B
More about the Author
Nancy loves chocolate-chip shortbread, wool plaids wrapped around the trim waist of a Scottish Highlander, the clang of dirks and broadswords, and the sound of bagpipes in the air. Nancy lives the dream. After growing up in Huntington, New York, and raising two handsome sons in New Hampshire, Nancy moved to North Carolina where she writes full-time. She and her family continue to volunteer at the New Hampshire Highland Games each fall. Nancy is a member of RWA, Heart of Carolina Romance Writers, Sisters In Crime, FF&P Romance Writers, and the Celtic Heart Romance Writers. Nancy is a proud Army Mom, and she also writes romantic suspense as Nancy Lennea.
Check out her website www.nancyleebadger.com
and her blog www.RescuingRomance.nancyleebadger.com.
Follow her on Twitter @NLBadger
and on Facebook http://on.fb.me/scmtx5
Posted by Louisa Bacio at 4:30 AM