Hi Louisa! Thank you for featuring us on your blog again. First we’d like to tell the readers about our new release, Rainie’s Lake, our fifth book to be published. We are so excited! Steve and I began writing together in 2008; more on how we reconnected below.
Here’s the blurb for Rainie’s Lake and excerpt. Enjoy! Oh, there will be a drawing! Details below. 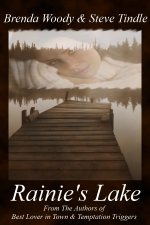