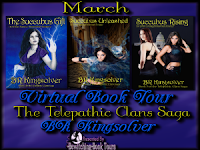 I've always been fascinated by the concept of the succubus, so when given a chance to interview BR Kingsolver on her Telepathic Clans Saga, I took it. Little did I realize, it was a two-for-one deal.

Louisa: Brenna O’Donnell is with us today. Welcome.
Brenna: Thank you for having me.

Louisa: I notice that you brought a friend with you.
Brenna: This is Rebecca Healy, my best friend and my bodyguard. They don’t let me go anywhere alone.
Rebecca: We don't dare let her out alone. She gets into too much trouble.

Louisa: She doesn’t look like a bodyguard.
Rebecca: I have hidden depths.
Brenna: She’s one of the most dangerous women on the planet, an incredibly powerful telepath.

Louisa: What is the name of the book where we'll find you? Can you tell us a little about it?
Brenna: I’m in three books, The Succubus Gift, Succubus Unleashed, and the latest, Succubus Rising. The Succubus Gift is about my coming of age and discovering my telepathic powers. I'm looking for love but also trying to deal with people who want to kill me. Succubus Unleashed is a continuation of the story. As I become comfortable with being a succubus and integrate into the Clan, my adventures and loves make up the story. In the third book, Succubus Rising, I have embraced my unusual Gifts and start work as a lobbyist in Washington, seducing politicians and influencing legislation in favor of my Clan. But really, the third book is more about Rebecca.

Louisa: Rebecca? Can you tell us about your part in the third book?
Rebecca: I don’t know if that’s really true. I mean, all the books are about Brenna. Everything’s about Brenna. (Brenna sticks her tongue out at Rebecca, and Rebecca laughs). But yeah, I have a larger part in that book. And I finally get a guy, which is pretty cool.

Louisa: Brenna, tell us about your family. I understand they’re quite unusual.
Brenna: That’s an understatement. My parents died when I was eight years old and I spent the next eight years with foster families. When I finally found my real family, I discovered my grandfather was born in 1853 and is the most powerful telepath in the world, as well as being wildly wealthy. My Aunt Callie is an incredibly elegant woman, a geneticist, and President of our Clan’s businesses. She’s also a powerful telepath. Then there's all the cousins, aunts, uncles, my other grandparents ... It was quite a shock to discover an entire telepathic society I never knew about.

Louisa: As a child, what did you want to be when you grew up?
Brenna: I’m not sure what I wanted to be as a child, but as I grew older, I wanted to know why I was so different. I could read people’s minds, and no one else could do that. I started doing research into psychic phenomena when I was fairly young, and that led me to study Neuroscience, how the brain works, and eventually I earned a PhD. Looking back on it, I think I was hoping to find someone else like me.
Rebecca: You can’t imagine what it’s like to have other people’s thoughts in your head all the time. People think it would be neat, but you feel like a freak. Those who grow up around other telepaths take it for granted, but for wilders like Brenna and me, it’s terrifying at times.

Louisa: Brenna, are you a morning person or a night person? Are you grumpy or cheerful when you wake up?

Rebecca cracks up laughing and Brenna gives her a dirty look.

Brenna: I don’t sleep very much. Four hours a night is about the max when I’m really tired. So I’m up both morning and night.
Rebecca: She’s disgustingly cheerful in the morning. She can stay up dancing and hunting the guys until everyone else is comatose and bounce out of bed at 6 a.m. with a smile.

Louisa: In mythology, a succubus is a demon who steals men’s souls. What is the truth about being a succubus?
Brenna: I have a genetic abnormality. I drain a man’s life energy, but don’t do any permanent damage, and definitely don’t harm his soul. I’m actually rather religious. We receive our talents as Gifts from the Goddess, and the succubi are Her priestesses. We act as a conduit of men's offerings to Her.
Rebecca: And the men love it.

Louisa: What do you know about your author's plans? Can we expect to see you in any future stories?
Brenna: Well, I'm the main character in the first two books, and also in the third book, but like I said, the third book is really more about Rebecca. BR has promised a fourth book about me sometime this year, but it might be even longer than that. After that, I think I'll take a break for a while. There are a lot of stories about the Telepathic Clans through the centuries, and I think some of them might be told.
Rebecca: In spite of what some people think, the world isn't just about Brenna. Some of the rest of us might get a shot while she's on vacation. I have a small part in a new paranormal mystery that BR is writing, and I hear there’s a YA/NA story about a Valkyrie going to school at Oxford university. I think there’s more stories than time to write them. 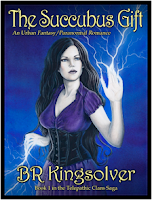 The history of the Clans, called the Sidhe by the Irish, stretches back to antiquity. The Goddess blesses Her people with 25 Telepathic Gifts. In addition to Telepathy, the Gifts include command over Air and Fire, Telekinesis and Teleportation. In over 2,500 years, She has never bestowed more than 15 Gifts on a single person.

Brenna Morgan was orphaned at eight when her parents were killed in a plane crash. Through one foster home after another, she carried the ornate, carved wooden box her mother had left with her, keeping it always a secret. Then one night she stumbles over a man who claims her as family.

Brenna’s life isn’t the same after she discovers her unusual and mysterious heritage. In addition to being a telepath, Brenna learns she has the Succubus Gift.

That’s just the beginning of her problems. Someone is stalking her. Then there’s the tall, dangerous woman who shadows her and hints a Goddess has linked them. And what is she going to do with a handsome, charismatic, womanizing man she knows she should avoid?

Some days a girl just wants to pull the covers over her head and stay in bed -- with a willing young man of course.
Succubus Unleashed 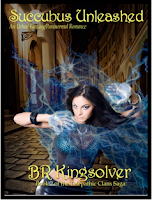 It's not easy being a succubus.

After a crash course in learning about her genetic heritage, Brenna O'Donnell has discovered what it really means to be a succubus and has learned to embrace her strange Gift. Her major concern is whether Collin will accept her for what she is. As she adjusts to telepathic society, others in the Clan have plans that will strip the last of her freedom. Rival Clans still hunt succubi, and discovering their dark motives is paramount.

The social season is also around the corner, including events that Brenna never imagined in her wildest dreams. The succubi, representatives of the Goddess on earth, are at the center of an ancient worship. And if a girl is going to be the center of attention, then obviously she needs a new dress. 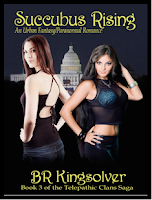 Rebecca Healy is a true wilder, growing up with no contact or knowledge of other telepaths. Discovered by a Clan member on the streets of San Francisco, she felt like she’d hit the jackpot. Finally, she knew what she was, or at least she thought she did.

When Brenna O’Donnell, long-lost heir of the O’Donnell Clan, and the strongest telepath in history, is returned to her family, she and Rebecca form a tight bond. Brenna has it all, looks, money, power, and men falling all over her.

Rebecca isn’t jealous, but it would be nice to find someone who would really love her and stick around in the morning. She’s intrigued by a handsome South American general, but of course, he has his sights set on Brenna. Carlos de Vargas wants more than love. His Clan has its back to the wall, and they hope for an alliance with O’Donnell. An alliance that would lead to war.

The story began in The Succubus Gift and continued in Succubus Unleashed. In Succubus Rising, questions are answered and new mysteries are revealed.
About the author:

I made silver and turquoise jewelry for almost a decade, ended up in nursing school, then took a master’s in business. Along the way I worked in construction, as a newspaper editor, a teacher, and somehow found a career working with computers.

I love the outdoors, especially the Rocky Mountains. I’ve skied since high school and I’ve hiked and camped all my life. I love to travel, though I haven’t done enough of it. I’ve seen a lot of Russia and Mexico, not enough of England. Amsterdam is amazing, and the Romanian Alps are breathtaking. Lake Tahoe is a favorite, and someday I’d like to see Banff in Canada.

I have a very significant other, two cats and two Basset Hounds. I’m currently living in Baltimore, nine blocks from the harbor, but still own a home in New Mexico that I see too infrequently.