Lisa Fox has visited a few times before, and I love her writing! Let's welcome her back with this hunk of love! 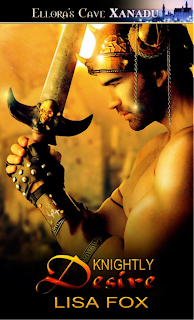 Knightly Desire by Lisa Fox
Blurb:
A routine mission turns disastrous when Knight Captain Brant and his men encounter a renegade mage. Injured and near death, Brant is brought to a nearby sanctuary of the god Ison, where the chaste sisters heal all those in need.

“You’re awake,” a female voice said and Brant jumped. He turned his head toward the sound and found a young woman roughly twenty years his junior sitting on a stool on the opposite side of the room. His armor, sword and shield sat on a table beside her. “The Mother feared you would never rise.”

She was a spark of brilliant light in the otherwise barren room and Brant hungrily drank her in, everything in him yearning to absorb all of her vibrant energy. He took in her round face, smooth with the innocence of her youth and marveled at the striking contrast with her wide, sapphire eyes. Those eyes held ancient wisdom in their depths and seemed to know secrets far beyond her years. That look, that shadow, added maturity and dimension to her youthful appeal, making her a devastating woman. He tried to tear his eyes away, he knew his examination was improper, but he couldn’t help himself. It had been too long since he had gazed upon anything beautiful.

She ran her hand over her short, spiky red-brown hair as she studied him. Her eyes trailed over him as she waited for him to respond, her gaze both curious and sensual. Her lips parted as she lingered over his bare chest, and when she dragged her tongue over her plump bottom lip, his cock stirred. Visions of capturing her warm, wet mouth assaulted him, and he could almost feel how soft her lips would be against his, how sweet she would taste. Blistering arousal ignited in his chest, awakening all of the nerve endings in his body, and he was suddenly, acutely aware that he was naked beneath the thin white sheet. Her gaze traveled farther down, leaving a path of fire in its wake, and when she paused at his waist, he almost gave in to the fierce, animal desire.

With a silent curse, he bit down on his tongue, hoping to temper his thundering pulse. It was completely inappropriate for him to respond to her in this manner. Especially since he had no idea who she was or what circumstances had brought him to her. He cleared his throat and tried to shake off the lust racing through his bloodstream. “The Mother?” he asked, and winced as fresh pain shot through him. “Where am I?”

“The Britnol Sanctuary of Ison,” she said, and he blinked, finally taking notice of her robes, the red and white adornments of the sacred Sisters of Ison. Brant let out a disgusted breath. Oh, but he was a fool indeed. Even without the cowl of her station—which was odd, he’d never seen a sister with her head uncovered before—he still should have recognized what she was.

“Where is everyone?” he asked. The other sanctuaries he had been to were bustling centers of activity, the sisters treating multiple patients for a variety of injuries and illnesses. He seemed to be in a private room rather than the main hall of the temple, separated from the other patients, and disquiet settled in his chest. Could it have something to do with the mage? He had been touched by magic, was he now…tainted? He quickly pushed the thought aside. He was whole, weak, but still himself. He glanced over at his newfound companion. She did not seem overly concerned about being in his presence. He didn’t think she would be so calm if there was any reason for worry.

She shrugged one shoulder. “Who knows?”

Before he could stop himself, his gaze drifted back down to her mouth and unbidden desire resurfaced in his heart. There was probably a reasonable explanation for his segregation, but their isolation tested the limits of propriety. This woman may be a sister, however youthful her appearance, she was obviously old enough to have taken her vows, but he was an outsider. “Surely they wouldn’t allow a sister to remain alone in the presence of a strange man?”

“Why not?” she asked, cocking her head to the side. The gesture was all at once innocent and impishly wicked. “They say you are a man of honor.” She touched the white stallion emblazoned upon his shield. “They say that this means it is so.” She met his eyes. “Are they wrong?”

Brant’s heart swelled with pride as he looked at the stallion on his shield. It stood for everything he believed in, everything he fought for, held dear and would die to uphold. Honor, justice, duty. He met her gaze. “No, they are not wrong.”

Her smile brightened her entire face and her eyes sparkled. “Then why do you ask?”

He laughed. He couldn’t help himself. Her whole aura demanded it. She may be innocent, but she was also a tad bit too flirtatious for a sister. When the sisters took their vows, they gave themselves to Ison alone. He wasn’t much of a follower, but he did know that Ison was a jealous, possessive god. Brant decided he would do well to remember that—for both their sakes. He forced his face back into seriousness and tried to assume as commanding a tone as possible considering he was lying in a sickbed. “Bring me the Mother. I wish to depart.”

Her smile widened and his blood heated. He had seen beautiful women before, he had mingled with and even romanced some of the refined ladies of the royal court, but none had ever stirred in him the longing that she inspired. It was thrilling. “Oh, I don’t think that’s going to happen,” she said, her tone playfully admonishing. “You were quite wounded when your men brought you here and we vowed in His name to heal you. The Mother is not going to let you go until she feels that is done.”

That was not the answer he wanted and he bristled at the confinement. He needed to get back to his men. That mage had been gathering an army. He needed to make sure that the threat had been eliminated, that everyone was safe. He was almost certain that he had succeeded, but there was always a chance that the man still lived, still posed an immediate and terrible danger. “I’m fine.”

She laughed, a joyful sound that filled the entire room. “Are you? Well then, stand up.”

He couldn’t believe his ears. Was she actually challenging him? He was so shocked, he almost laughed. “What?”

“Come on,” she said, humor and mischievousness and deep knowing in her blue eyes. “Stand up. Prove how well you are.” She rose to her feet and extended her hand to him. “If you can take even two steps, I’ll get her for you.”

She was teasing him. He shook his head in disbelief. And he was enjoying it! “Why do I have to prove anything to you?”

She smiled. “Because, Sir Knight, I am your keeper until you have recovered.”

“You?” he said, and this time he did laugh. “You’re barely old enough to be your own keeper.”

“I am older than I look and we both know that wisdom is not reliant upon age.” She raised an eyebrow and her smile transformed into a smirk. “And you have not gotten out of that bed.”

He told himself that he was not being baited. He was going to get up, prove to her how fit he was and end this ridiculous game. And he was fine. Mostly. Fine or not, he had to get back to his men and resume his command. He wrapped the sheet around his waist and rose from the bed. His legs folded beneath him.

She was by his side in an instant, holding him up. She hugged him tightly and the soft, floral scent of her filled his head. He breathed deeply, taking in her delectable fragrance. Her body moved against him, lithe and firm under the heavy, shapeless robes, and the fire that had been simmering in his blood flared back to life. He wrapped his arm around her waist, drawing her closer. Her smooth, white skin flushed a rosy pink and he could feel her breath catch. His eyes fastened on her mouth and hunger descended upon him in a wave of lust. She lifted her chin to him, her pink lips slightly parted and he leaned into her, accepting the unspoken invitation. The warm flutter of her breath tickled his lips and long buried desires swept through. He wanted to drink in her heat, her beauty, her feminineness, things that were forever missing from his life. His cock awoke with deep, throbbing need and his eyes drifted shut as everything in him yearned for one tiny taste of heaven.

The door opened and Brant started at the sound. The Grand Mother entered the room, frowning mightily as she took in the scene and the girl froze in his arms. The Mother’s steely-gray eyes fixed on the sister and he felt her twitch. “Gabrielle, attend,” the Mother commanded, and his beautiful keeper deposited him on the bed and went to the Mother’s side. “I believe it is your turn to stock the warehouse?” she asked, and Gabrielle flicked him a last look before nodding and leaving.

When the door shut behind her, the Mother turned her attention on him. “Welcome to the Britnol Sanctuary of Ison, Sir Brant,” she said. “I trust you are finding it comfortable here?”

Her voice was sharp with disapproval and it only deepened Brant’s regret for his actions. He had come into this house of a god and tried to take what didn’t belong to him, what he had no right to claim. “Mother,” he said, inclining his head to her. A formal bow would have been better, but it was the best he could manage. He did not think he could stand up again without help. “Thank you for taking me into your house of healing. I am in your debt.”

The Mother inclined her head in return. “We do our sacred duty here,” she said, and then met his eyes.
Brant heard the warning loud and clear. A warning he was ashamed to have to receive. He had tarnished his own honor when he tried to take advantage of the young sister. It was not a mistake he would make again, no matter how much his desire for her enflamed his blood. She was not his for the taking.

World-renowned neurosurgeon, jet fighter pilot, secret member of American royalty, seducer of legions of beautiful, outrageously sexy angels and demons and vampires and werewolves and the occasional pirate, Lisa Fox has done it all…in her own mind. In reality, she can generally be found at her desk with a cup of coffee close at hand. Or maybe a martini. It really depends on the day.
Feedback, comments, opinions, words of wisdom, chocolate cake and the addresses of super hot men are always appreciated and encouraged. Please feel free to contact Lisa any time.
Email: lisa@lisafoxromance.com
Website: www.lisafoxromance.com
Twitter: @LisaFoxRomance
Facebook: https://www.facebook.com/LisaFoxRomance