Kitty tells all: How Hotel Sex Turned Me Into A Romantic Comedy Writer


Fellow OCC/RWA member Kitty Bucholtz possesses a bigger-than-life personality. In person, you're struck by her dynamic smile, and go-get-'em personality. She tends to write romance that's a bit more "sweet" than, say, mine. OK, a lot more sweet, but also a lot more funny. Today's guest blog is a perfect example of her humorous side coming out. 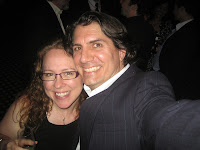 I spent last weekend in a hotel with a couple hundred romance writers. The daytime events were fun and interesting and useful, but the nights were good, too.

I love nice hotels. The pillows and comforters seem softer than the ones at home. The bathroom is brighter and cleaner. (Maybe I should hire a hotel maid for home. They obviously do a great job.) Plus, I don’t have to cook or do dishes!

But I think the best part of going to a nice hotel is the hotel room sex. It just seems more fun! Of course, that could be because from the start I’ve always thought of hotel room sex as just a bit naughty.

You see, when John and I were on our honeymoon, we were getting ready to check out and he came in from loading the car, all wide-eyed. In a low voice, he said, “I think the people next door heard you last night.”

“What?” I gasped and covered my mouth. Surely not. That was about the most awful thing I could imagine when I was 22.

“I was taking the suitcases down,” John continued, “and this older couple from next door walked out of their room and when they saw me, they both smiled. The guy gave me a thumbs up and nodded toward our room and grinned. I think they heard you.”

“Oh my gosh!” I buried my face in John’s shirt. I wanted to hide. Or hurry away before anyone else saw us and said anything.

John’s chest shook under my cheek. I wanted to cry, but John doesn’t cry. Why was he - ?

I looked up at him and he burst into laughter. He laughed so hard he almost fell over. He leaned against the wall and tried to talk.

What I really couldn’t believe was that my brand new husband was capable of such trickery! But over the past twenty years, I’ve learned that not only is he good at embarrassing me, he’s also got a good memory for reminding me of every single stunt he’s ever pulled. He may not remember our home phone number, but he remembers my expression that day. And he’s more than happy to embarrass me again in front of new friends. 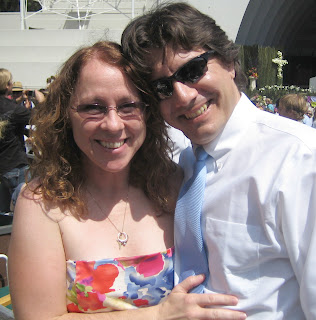 That’s also the beginning of my journey toward writing romantic comedies. As I told a reader last weekend, sadly, yes, all of my heroes are tall, dark and handsome. I can’t seem to write them any other way. (John, standing next to me at the time, smiled and winked and said, “I’m her inspiration.”)

It’s true. Matt, the hero in my chick-lit style Little Miss Lovesick, is based partly on the actor from those old Diet Coke commercials, and partly on John.

Joe, the hero of Unexpected Superhero (book one in The Adventures of Lewis and Clarke, coming out in April), is half Hugh Jackman, half John.

I tried to make Danny from Love at the Fluff and Fold (to be released summer 2013) different. He’s a little shorter and has straight sandy-brown hair. (I don’t know how long that will last. The cover image I like has a tall, dark and handsome man in it.) But when I’m writing the best parts of Danny falling in love with Cassie, I picture John.

I can’t help myself. I think John is one of the sexiest, funniest, most handsome men I’ve ever known!

So I was pretty happy when he decided to join me at the hotel Saturday night. Because he came in late and I already had the room, it felt like a tryst.

“Listen,” I told him, “I’ve got a condom upstairs with your name on it and I really want to use it before I fall asleep!”

True to hero form, John pulled me tight against him and hit the elevator button several times. Upstairs, our door hadn’t fully closed before clothes were flying off.

Voices that keep her sane and voices that drive her crazy. The one thing they all agree on - forget Dirk the Jerk and move on.

So Sydney lets her friends drag her into the wilds of Northern Michigan where Little Miss Lovesick, the loudest voice in Sydney’s head, runs into - literally - the perfect man. Is hot fishing guide Matt Engel the man to vanquish heartbreak?

With the vacation flirtation behind her, Sydney is ready to start again. Soon after, however, a difficult - and must keep - client demands Sydney work with his new contractor. Yes, one and the same Matt Engel, hotter than ever and right here in town.

But when Matt’s past comes between them, Sydney wonders how to prevent another broken heart. As the rest of her life spirals out of control, she learns that sometimes a plan isn’t enough without friends to share the load.

Maybe together they can even help Little Miss Lovesick find what she’s been fishing for.

Kitty Bucholtz decided to combine her undergraduate degree in business, her years of experience in accounting and finance, and her graduate degree in creative writing to become a writer-turned-independent-publisher. Her first novel, Little Miss Lovesick, is now available in print and ebook format. Her next novels, Unexpected Superhero and Love at the Fluff and Fold, will be released in 2013. Her short stories can be found in the anthologies Romancing the Pages and Moonlit Encounters, available in both print and ebook format. Follow Kitty on Facebook or on Twitter.