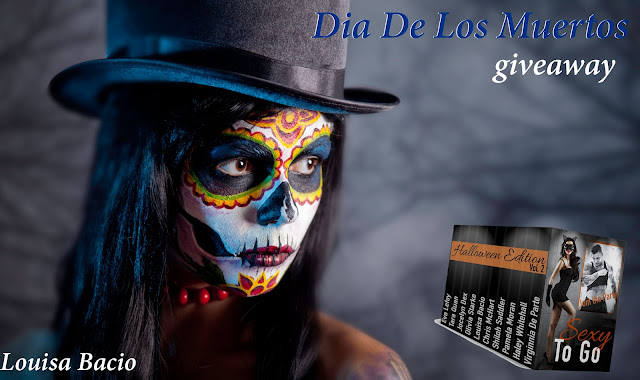 Just in time for some celebrations! Sexy to Go Halloween is back for a howling good time! Join us for a holiday romp with 10 sex-hungry vampires, werewolves, ghosts, zombies, demons and more.

I've got a special contest in honor of my short story contribution, "Dio del Amor." See how to enter below.
Dio del Amor by Louisa Bacio
On a day known for honoring the souls of departed loved ones, this couple heats up the costuming before the fiesta. Explore when Dia De Los Muertos transforms into Dia Del Amor.
A Battle of Ice and Claws by Tara Quan
On Halloween, a stubborn frost witch will stop at nothing to postpone commitment, including distracting her sexy tiger shifter with the promise of public sex.
A Wicked Tryst by Olivia Starke
After taking a shortcut Kalie finds herself stranded on a desolate highway. When a horse and rider appear, she’s happy to be rescued. Is the sexy country boy her dream come true? Or has Kalie gotten in over her head?
The Portrait of Dorian Clements by Eva Lefoy
In Regency England, a rich widow has her portrait painted by a strange traveling artist, not knowing he’s the minion of the demon intent on seducing her. The painting at first seems perfectly normal, but then begins to change, depicting myriad graphic sexual scenes, displaying to her horror the widow’s innermost desires…
Trick-or-Zombie by Jocelyn Dex
When Trista takes her zombie trick-or-treating, will he make a snack of one of the kids? Or will he resist temptation and snack on something better when they get home?
Unlocking the Past by Pamela Moran
Davis’ past crashes into the world he’s built with Lena. As secrets unfold, will her Healer ability cost her the man she loves?
Vampire Consort by Haley Whitehall
Mary only has months to live. Her doctor gives her an option: prepare her funeral or agree to an arranged marriage with his vampire son.
Angelfire by Virginnia de Parte
Candles, garlic, rifle, bullets - will these be enough to save Emma's life on Halloween?
GLBT / Menage
It Started with an Old, Lame Joke by Chris McHart
The last thing Robin expects when he takes his niece and nephew trick-or-treating is to meet a handsome stranger doing the same thing. Their connection is instant and hot, even though everything started with an old, lame joke.
Shifting Sensations by Shiloh Saddler
The Halloween bash at the Shifting Sensations nightclub is the paranormal event of the year. Incubus nightclub owner Ruger is on the prowl for two playmates to liven his evening -- dare he allow one to be his employee?
Buy Links:
Amazon Universal: myBook.to/stgHalloween2
iTunes: https://itunes.apple.com/us/book/sexy-to-go-halloween-2/id1162847196?mt=11
Kobo: https://store.kobobooks.com/en-us/ebook/sexy-to-go-halloween-2
Barnes and Noble: http://www.barnesandnoble.com/w/sexy-to-go-halloween-2-eva-lefoy/1124781367?ean=2940153480817
All Romance Ebooks: https://www.allromanceebooks.com/product-sexytogohalloween2-2150313-166.html
Other Links:
Goodreads 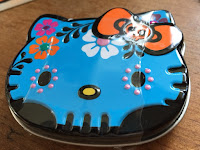 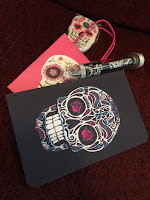 a Rafflecopter giveaway
Posted by Louisa Bacio at 1:53 AM