Cover reveal: The Vampire, The Witch, and The Werewolf: Luna Twins

It’s been years since a new story in The Vampire, The Witch, and The Werewolf world was released. When I was asked to be part of the new Shifters & Spice boxset, I couldn’t help but drop in for a naughty visit.

The Luna Twins focuses on Zada, the twin sister from the last book, Her Wolf Ménage. Her Wolf Ménage featured Jana’s adventure in the big city of New Orleans where she explored her options with country wolf Dom and city slicker Andre. She also discovered she had a twin!

Zada’s a bit untraditional with purple hair (imagine that, my first character with novelty colors) and a lot of sass. The storyline also shifts to Savannah, where she soaks up the sultry atmosphere.

Fiercely independent, Zada never thought she needed anyone ... until life proved otherwise. She learns of an identical sister, making her one half of the Luna Twins, and becomes entwined in a prophecy to unite warring packs.

Country playboy shifter Alex lived day-to-day as a Hunter for the Wolfe Pack. On pack business to Savannah with Zada, he gets caught up in a destiny to forever change his world.

As future leader of the New Orleans city pack, Charlie expects life to come easily. He glides by on the prophecy to marry one of the Luna Twins. Why work for what is fated?

But as the trio discovers, the choice isn’t always yours. The uniting of the three must occur for their future to be set.

Special thanks to Jenn LeBlanc at Studio Smexy (http://jennleblanc.photoshelter.com) for an amazing menage cover image! Scott Carpenter, P&N Graphics, for an amazing cover that stayed in the “family” of the series (http://pandngraphics.com), and to Linda Carroll-Brad for her editing services via Lustre Editing (https://lustreediting.com).

“Charlie, Zada, and Alex make a great team. They meet under difficult circumstances with the two men fighting over Zada. During their trials to remove a curse, they come to respect and love each other. The story has a little bit of everything; silly, sad, and also some very hot scenes.” – Diana, Amazon review 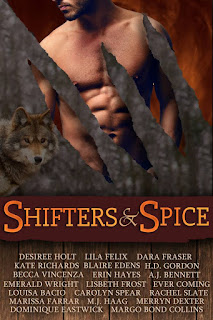 The Shifters & Spice boxset releases on Sunday! While my solo novellas go for $4.99 and $6.99 for a full-length, this one is priced at .99 cents in the boxset! (The magic of an indie publisher.)

If you dream of shifters, this set of 20 brand new shifter stories featuring USA Today and New York Times best-selling authors has you covered. Whether you like them large and in charge or sleek and sexy, you'll find the right story to spice up your night in these pages.

Stay tuned! This weekend is going to feature some fun times with the Spank or Treat Blog Hop, starting Friday.

** Note, if you're part of my Street Team or on my newsletter, you got the sneak peak to this cover a month ago!
Posted by Louisa Bacio at 3:28 PM