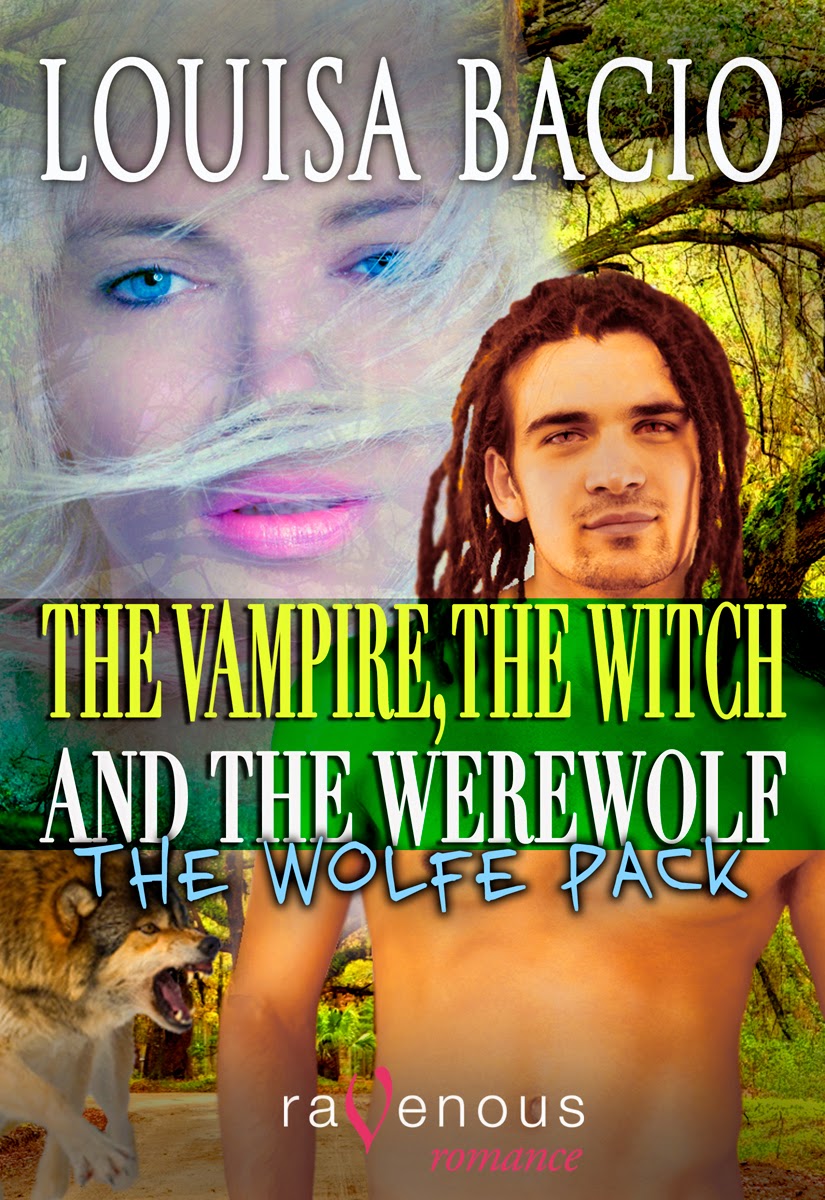 The story shifts, and sometimes characters don’t play nicely. Silver and Nick’s story continues in The Wolfe Pack, the 5th book in the The Vampire, The Witch & The Werewolf. From New Orleans, Silver flees for the forest, and she changes more than her living quarters.

I have to admit, this book is a favorite. That’s tough to say with all the others. Readers meet Jana for the first time, who is the heroine of the upcoming Her Wolf Ménage. If you’re going to read one before book 7, this one is it.

The Vampire, The Witch & The Werewolf: The Wolfe Pack

Silver Ashe can’t let go of the desire to find her birth father and the physical call to join a pack. Against the wishes of her brother, Trevor, and her vampire-lover, Nick, Silver leaves New Orleans for the woods of Louisiana.
As the guard and a dominant member of the Wolfe Pack, Viktor isn’t too sure of the city-dwelling stranger who comes trespassing. With the lack of female werewolves, Viktor soon sees Silver as a potential mate. Too bad she’s already spoken for by a bloodsucker.
Trapped between worlds, Silver’s faced with choosing between the lover she’s known most of her life, and the budding relationship with Viktor, where her future may lay. It’ll take some sweet talking and a whole lot of loving for Silver to find her place within the pack.
Available via Amazon, Ravenous Romance, Barnes&Noble and ARe.

The sunlight glinted off her hair like a jeweled treasure. Viktor shielded his eyes at the glare, and checked out the rest of the invader. Dirt streaked across her muscled arms, and despite being winded, she took in their encampment with a look of awe. Pride swelled within Viktor’s chest. He’d put a lot of his own strength into the building of the site. The key was comfort and usability. He wanted the homes to blend into the environment. They weren’t creating a residential neighborhood one would find in a big city. They were a tribe. A pack.
One with nature.
What worried him though was the lack of defenses. How had she invaded their home turf without anyone being alerted? Usually, they knew when a stranger was close by. He raised his nose, sniffing the air, and caught an odd, yet familiar scent.
She was a wolf, and related to someone within the pack.
“Looks like Lupa found a new friend. What did you say your name was, again?”
Jana, one of the women of the Pack, approached the unknown woman. As she grew nearer, the woman bowed slightly, as if not to elicit conflict. He drew nearer.
“Looking for someone,” the woman explained. “Is this the Wolfe Pack?”
With the mention of the surname Wolfe, Jana turned to Viktor, a question in her eyes. He stepped forward.
“I am Viktor, and you have entered into our territory. What can we help you with?”
As the woman glanced up at him, he was struck by her light blue eyes. Her delicate mouth turned up into a smile, exposing teeth fine for ripping meat from the bones. Although she was tall, he was taller than her by a foot, and up close he could see the muscles in her arms. She was a strong female, and if his senses were correct, she’d make a strong wolf.
“I am Silver, and I’m looking for my father Nathaniel Wolfe. I was under the impression he may live out this way.”
The admission didn’t totally shock him. He’d heard rumors about Nathaniel’s other family for years now, a wayward son. Never did he—or anyone else—expect someone to show up at their homestead, especially a specimen such as this one. The daughter of their pack leader, a fertile beauty. Such a rare occurrence would be ripe for the picking.
He gave her his best smile, and she backed away.