Savage Smoke ~ Why I wanted to kick a Story-stars A**

I continue to find it amazing how friendships can be formed Online. At this point in time, I really shouldn't find it surprising. One extra special friend to me is Kay Dee Royal, a "sister" at Ravencraft's Romance Realm. Please give her a warm welcome! 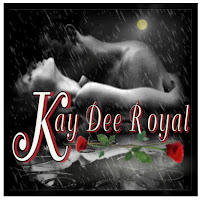 Hi everyone;) Hello Louisa, *hugs* thank you so much for having me today and allowing me to vent a little about one of my story-stars in Savage Smoke. Well, he was also in Staring Into the Eyes of Chance as that is book 1 in my Lycan International Investigation Series.

Smoke is a culprit, the villain, the notorious, dangerous rogue of all rogues. A fall off a cliff left him with an open sunken cheek (shows a few of his teeth) and a milky blind eye. It definitely gives the impression he’s a bad-ass, even though on the short side in stature (runt of the litter), his wild appearance and muscularly buff bod keeps larger opponents at bay.

He comes from a paranormal dysfunctional family…or so it is to him. Smoke isn’t his real name, but it works for him since his brother, Chance, the Alpha leader of the LIIA headquarters in Upper Michigan, constantly tracks him and his rogue pack.

Smoke plans a major take-over. He’s had his fill of the Elders creating rules and over-seeing who lives and who dies. It’s time for a new league of justice or injustice…and he’ll do anything to get what he wants. Even if it means kidnapping, impregnating, slaughtering, drugging, or anything else required in making it happen.

I had him dead to rights…seriously, dying in book 2 (Savage Smoke). I played hell writing the last chapters because his lights were out for good…but, he kept kicking and yelling, insisting he should get the chance of redemption, AND he demanded something else, too. Something he never had before…and it was his due to claim it.

Well, after much deliberation and rewrites…and suckin’ it up–he lives. Got his dang wish come true, too…but you’ll have to read it to find out what that part of the equation isJ *Big deep sigh*

Yes, so Smoke lives on for book 3, Smoke ‘n Bliss.

Tagline: Will Trevor rescue Lindsey in time to save her from shifting into Smoke’s pack, and will she even want saved?

Chance and his LIIA pack of agents search for rogue Lycan mastermind, Smoke, kidnapper of Lindsey and fifteen other human women he plans to use for procreating his own army.

Trevor, Chance’s right-hand Lycan, wants his mate back, but believes she’s fallen for her captor. Lindsey loves Trevor but believes he’s given up on her.

Will Trevor come around in time to rescue Lindsey and save her from shifting into Smoke’s pack, and will she even want back with Trevor after spending so long apart?

Amazon: Muse It Up Publishing Store:
Also available at many other fine e-book stores.

Short Excerpt:
So far, Smoke didn’t share Lindsey with other males, but she was aware of the orgies inside the central building. She heard a few women talk of them. Some even liked them, being surrounded by hard-bodied men hung like rocket launchers. Those women went at it without the use of the stimulation drug Smoke used on everyone else.
She was used to the little needle pricks and welcomed them. It made acting the part with Smoke so much easier, believing in her heart Trevor made love to her, but guarding that fact from Smoke by holding Trevor’s name in the secret place, locked safely away.
Lindsey understood some of the sexual attraction. She had that once, but she couldn’t go there in her mind. Smoke searched her thoughts almost daily and always found if she’d tapped into any memory nuggets of people she loved. He possessed psychic abilities others didn’t. Already, the thoughts of Trevor that had emerged she’d need to bury before Smoke returned.
If an orgy ensued during their pack meeting, Smoke would be preoccupied for a good while. She reached her arm underneath the mattress, where a few weeks ago she saw Smoke slide his journal. Lindsey had fallen asleep with her back to the fireplace. A crack of thunder wakened her in time to witness Smoke closing a journal and placing it beneath the mattress they shared.
Lindsey touched its leather cover, wrapped her fingers around it, and hauled it out.

Tagline: Olivia swears off men until she meets Chance, a Lycan alpha. He ignites an undeniable hunger they can only sate together.

Olivia endures a thirty-four year passionless marriage, discovering her dead husband’s philandering history at his funeral. She devotes her energy and life-long sensitivity with animals to her wildlife refuge and preserve.

Chance, a Lycan alpha and leader of the Lycan International Investigation Agency (LIIA) throws himself into his investigations. He chooses to neglect his duty of finding a primal-mate after watching his father become an empty shell over the loss of his.

Will they succumb to its enticing tether, or fight to resume their loveless lives apart?

Amazon: Muse It Up Publishing Store:
Also available at many other fine e-book stores.