We have a treat of a new author visiting today. Yazmin Subha chats about her debut release Wildfire, and with many more in the works, expect this writer to spread like ... need I say it?

Thank you for having me over to visit. As you know, I am really excited at the moment because I have had my first ever release, Wildfire came out on August 24 with Breathless Press.

My writing has all been about a journey into discovery. Realizing that something you liked to do in the past does not have to stay there. I loved scribbling when I was younger but life took over and the scribbling stayed in the past. However, about a year ago, I rediscovered the delight of writing and then with the help of my Critique Group – UCW- this discovery turned into a story then into a novella – Wildfire. My journey continues and I continue to make discoveries along the way!

Braden, my hero in Wildfire makes a discovery in the form of Millie. He has to fight for her then faces a stark choice. This leads him to making another discovery…I will leave it there for the readers to discover for themselves!

But here is the blurb and excerpt. 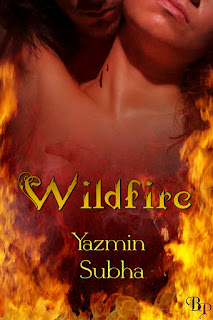 Braden has searched all his life for the one who will help him regain his humanity and give him absolute power. One bite and he knew Millie was the one he had been searching for. Millie, a fiery red head is the last one in the line of high born witches who would rather die than give herself to this vampire. After all he killed her mother for her blood as well, didn’t he?  But in a twist of fate Millie learns too late what the truth is. But will death be the only thing that unites them?

She was slight, her curves meshing against him as though they belonged next to him. She continued to wriggle her lower half trying to get out of his arms. Only the friction awoke the fierce passion residing underneath his skin, and his cock hardened.
"Be still my wild fire, it will be easier." Braden spoke in a low tone directly into her ear. He caught the smell of her hair and could not resist burying his face in the mass of red curls. He groaned with need. Need for blood and need for her.
His voice soothed her anxiety and he felt her stop trying to get out of his arms. Her heart beat slowed down, eventually matching his own. Synchronized again, Braden kissed the back of her head. Enjoying the feel of her silky hair in his face, he bathed in her curls. Moving the curls away from her neck, he bent down, opened his mouth, and sucked the skin on her neck. She tasted of nectar, his very own personal brand.  His head screamed to bite, to taste that rich blood he had sipped last night in the car wash. But the man in him wanted her to be willing, to take her as she reached the height of orgasm as she had nearly done so in the car wash. This time he would be inside her, not just pleasuring her with his hands.
His mind came back to the present as he felt little shakes coming from her, and he realized she was crying.
Her little voice wobbled and she gave a sob, "don't hurt me, please."

Well I hope your readers like the sound of that.

You can find the Wildfire here:

Up and Coming Works.

I am waiting for edits for book 3 of the Blood Bar Chronicles anthology due out later this year with Breathless Press. My story is called 'Logan's Captive.' Also in the edits queue is 'Gypsy Butterfly' which is part of Eclipse of the Blood Moon anthology with Evernight Publishing and Breathless Press have also said yes to another book called 'Guardian Awakening' so I am waiting for all that to come through. This book is intended to be first in a series of three, so I need to rework the second book and start thinking about the third.

Here's a little bit about me:

Yazmin Subha is a busy mother of two children, whose husband has got used to her sitting tapping away on her laptop. By day she sits at her job, all respectable and prim but by night she is imagining feisty heroines and sexy alpha males.

She is a British author who grew up with a love of reading. Books created other places, times and worlds to visit. It was the desire to try to write that saw her pen her first short story as a teenager. But then everyday life got in the way and it was only recently that she began scribbling again. Encouraged, or rather dragged screaming and kicking by her critique group UCW she decided to ‘have a go’.
Her teenage dream is finally coming true.

Well Louisa, thank you for letting me visit! I hope to come again.