Why Werewolves with Cait Lavender

Oh, I've got my ideas about an answer to Why Werewolves. Let's see what Cait has to say! Lucky you, Cait is giving away 5 print copies of Hunter Moon and a $25 Amazon gift card. Enter at the end of the post! 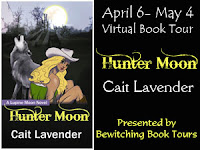 As a paranormal romance author, there are so many paranormal beings I could have chosen for my books, I often get asked why I stuck with werewolves. In a genre where there are mermaids, Fae, Greek and Roman gods, demons, etc. it’s a valid question why I’d go with an oldie-but-goodie. My answer? I friggin’ love werewolves. But I should add the caveat that I mainly love weres that shift at will and maintain their mental faculties in both bodies. I’m not so much a fan of the mindless killing machines that can’t stop being what they are.

But with my shifters, what’s not to love? They’re stronger, faster and have keener senses than humans in both shapes and mine are generally really, really ridiculously good looking. Yes I just quoted Zoolander, deal with it. Wolves are graceful apex predators, and werewolves have being an Alpha male down to a T, and there’s nothing sexier than an Alpha male. Plus, having the added bonus of the shared mental connection between pack mates just makes being a were that much cooler. Who wouldn’t like a homing beacon in their head in case shit got real? And my love of weres doesn’t just include wolves, but shifters of all species: Lion, coyote, tiger and bear, oh my!

I suppose my infatuation with werewolves started at an early age, watching Silver Bullet and American Werewolf in London as a kid, but I think it goes deeper than that. It really boils down to the fact that I really wish I was one. How freakin’ cool would that be? The hightened senses would be neat, and the speed and strength, but I mainly would love to get all furry and run around. Maybe I have issues. Be that as it may, I’ve written my weres to be everything I want; Sexy, strong, loyal and they’re almost always the good guys. So I ask, what more could you want?

Bawling cattle tore Shelby Flint from her bed. With lawyer fees to pay in her struggle to keep her ranch from the clutches of her greedy cousins, she couldn’t afford the loss of even one calf. When she sees a large wolf circling her cows, she aims and fires. While the wolf escapes, Shelby can’t seem to get away from her troubles when a marijuana grower sets up shop on her land, sabotaging her property and eventually coming after her.

Adding to that, a handsome game warden is poking his nose into her business and working his way underneath her skin. Shelby will have to fight harder than she ever fought before to keep from losing her heart and everything she ever loved.

Shelby Flint is a self-sufficient cowgirl and cattle rancher, but when a wolf goes after her calves, a man is murdered on her land and someone is sabotaging her property she can’t do it by herself any longer. In walks a handsome game warden, poking his nose in her business and working her way under her skin. Shelby will have to fight harder than she ever has before to keep from losing her heart and everything she ever loved. 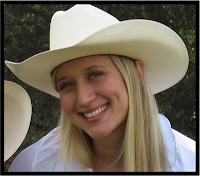 Cait Lavender is a twenty five year old wife and stay at home mother of one in Central California. Living on a cattle ranch and raising her daughter doesn’t afford her much leisure time, but when she has a spare minute or two she loves riding horses, baking and reading everything she can get her hands on. She grew up loving the written word and creative writing and finally decided to work on her dream of becoming a published author.

She has a short story, Cowboy Moon, and a full-length novel, Hunter Moon, both available on Smashwords, Amazon and Barnes & Noble. She’d love to hear from you on her Facebook author page, @caitlavender on Twitter or on her blog, www.caitlavender.com


a Rafflecopter giveaway
Posted by Louisa Bacio at 12:30 AM