Giveaway closes at midnight PST on 7/18 – to enter please use the Rafflecopter form at the end of this post!

Blurb
The worst moment of Micah’s life was when Ella nearly died in his arms. Her miraculous recovery should have been the start of their future. Unfortunately, a new demonic heritage, the Shadow Agency’s corruption and Julian, the vampire who turned Ella, are testing their relationship. Despite hotter-than-ever sex and a variety of new places and positions to explore, Micah begins to wonder if a relationship based on lust can survive for more than a few scorching-hot months.
Ella has forgiven, but not forgotten, the fact that Micah once plunged a dagger through her heart. Everything with Micah is passion, excitement and an uncontrollable desire to explore his body in a variety of very satisfying ways. But as buried secrets, ongoing lies and murderous deceptions pile up, Ella is reminded that she and Micah’s relationship was based on a curse. In order to forge a future together, Ella and Micah will have to face down their personal demons—and prove that love and trust are more than just words.
A Romantica® paranormal erotic romance from Ellora’s Cave
BUY LINKS
| AMAZON | B&N | KOBO | ARe | EC | GOODREADS |

Excerpt (Rated PG-13)
I turned my head, searching for the spot where I’d stood before being tackled. In place of the wall, there was now a gigantic hole. I squinted, turning my face away from the last rays of golden sunshine dropping behind the sea of snow-kissed evergreens surrounding the secluded house.
Thirty minutes earlier and the sun would have fried my retinas. I waved away the remaining smoke and sought out Micah. He stood speechless in front of me, his blue-green eyes wide, sensual mouth open. Under the pungent scent of sulfur mixed with singed hair and fur, I picked up the faint muskiness of demon blood.
Dark-red lines dripped in a horizontal gash on Micah’s cheek, caused most likely from the flying debris, but he didn’t seem to notice. Dirt smudged his bare chest, and pieces of wood tangled in his shaggy golden hair. The shadow inside me—my feral inner vampire—just as much a part of me as my fangs and beating heart, preened at the sight of sweaty, dirty, alpha male.
Lethal. Deadly. Demon.
Mine.
Micah wore nothing except athletic shorts slung low on his hips, his normal attire when we trained together—something we hadn’t been doing much of lately. The stark, crimson lines of our mating tattoos traced his hip, curved down, over defined muscles and disappeared beneath the band of his shorts. Water dripped from his hair, plastering the dark strands in clumps to his forehead and nape. Each breath flexed an impressive show of muscle in his chest and abs. Good to know his assassination attempt hadn’t damaged my hormones.
I moved my gaze from the trail of hair down his stomach to the hand he held fisted at his side. The flesh smoldered. I looked from his smoking fist to the hole where the wall used to be.
I turned back to Micah, used a thumb to gesture behind me. “If this is about leaving the toilet seat up, I’ll stop bitching about it.”

Haven’t read the Dark series yet? Start with Dark Cravings (over 50 five star reviews on Amazon), it’s the first full length novel in the series…

Dark Cravings Blurb
Ella Grey's life sucks. A half-breed vampire, she does her best to pass the time killing demons and

secretly admiring her Shadow Hunter partner, Micah. He's hot, dangerous and knows it. He'd be just Ella's type if he weren't likely to kill her the moment she put a toe out of line.

A chance encounter with a succubus changes everything. From the second the succubus' spell washes over them, Ella and Micah are helpless to keep their hands off one another. The sex, when it's not leaving them on the verge of death, is earth shattering and for the first time in ages Ella is connected with someone on a level she'd feared lost forever. But a dangerous prophecy has been set into motion, and if Ella's not careful it'll pull her straight from Micah's arms and into the deepest bowels of the underworld. 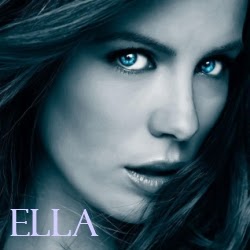 About Madeline Pryce
Madeline Pryce wrote her first novel when she was ten, penned with neon-pink ink in a loose-leaf binder. Captivated by romantic literature, yet intrigued by the paranormal, she continues to develop her own voice, writing the kinds of stories that inspired her as a teen.

a Rafflecopter giveaway
Posted by Louisa Bacio at 4:30 AM