I met Rebekah R. Ganiere at the SoCal RWA conference in early 2013. What drew my attention? Her AMAZING heels. Truth! Her @VampWereZombie Twitter handle cemented the fascination. I'm thrilled to offer a glimpse at her debut release, Dead Awakenings. (Doesn't the heroine on the cover look a bit like "Buffy the Vampire Slayer?") Expect much more from Rebekah. 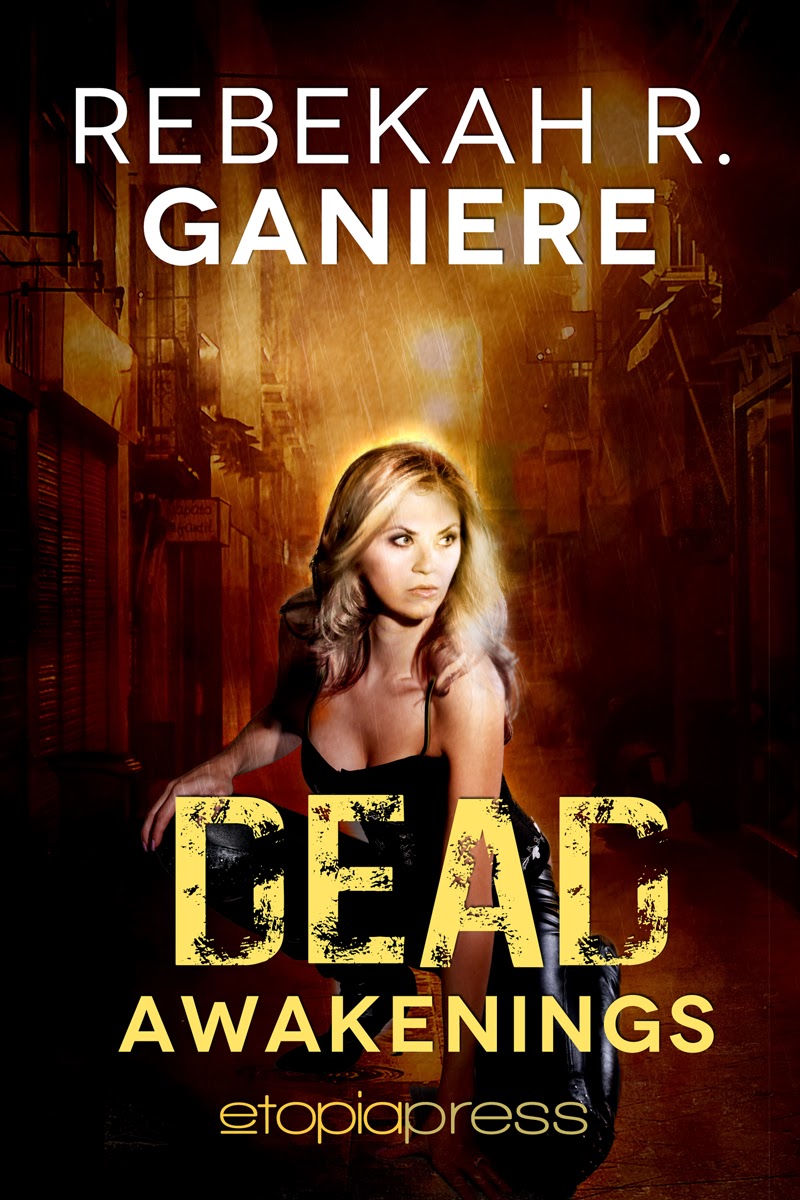 
“Let go of me! Let me have him!” She screeched.
“Stop it! The hunger’s strong, but you can control it. You’ve already fed; you don’t need any more.”
Solid arms unwrapped from her waist and turned her, grabbing her by the shoulders. Luca was in her head again. No longer commanding, his voice soothed her, soft as a lover. “Look at me.” He called to her, over and over, until she met his gaze. His eyes blazed, but no longer bright orange. They were blue ice, with sparks of fiery orange flecks in them. She concentrated on his soft, gentle voice. Her head began to clear, and she felt the tingle of his hands through her shirt. Sparks of energy flowed through her body.
“I know you want the high from feeding again. But believe me, you don’t want to start out your new life by killing people—it will haunt you forever. You have to learn to control your hunger. Control the rage.”
His words sunk in and like cool water flowing over a fevered brow. She focused on the vibrations of the sound. His tight black T-shirt was stained with blood and torn in several places. Her gaze roamed over his face and his chest, seeing every hole, every mark, every smudge. Luca was a good head taller than her and broad as two men at the shoulders. An unmistakable musky odor rolled off of him and sent fire into her belly. She traced light patterns over the surface of his T-shirt with her fingers absently. He watched her fingertips as they touched him. Fire bloomed inside her in sudden waves of need. She wanted nothing more than to feel his lips on her skin. The weight of his hip bones on hers as they made love. Embarrassed at her shockingly sexual thoughts of a man she didn’t know, she glanced away.
He released her and took a step away, still watching her with a rapt interest. The moments passed and she finally relaxed. Luca stepped forward, grabbing her once more, and ushered her toward the front of the house. Behind her she could hear Aron quietly apologizing to the workers for her behavior.
What happened? Her body ached as though she had run a marathon. She didn’t want to move; she didn’t want to think. One minute she’d been completely fine getting out of the car. The next, out of control, taken over by a rage and her need to feed. And have sex. She sagged, exhausted, sad, and embarrassed. Allowing herself to be drug along, she was so weary all she could think about was her feet. Right over left, right over left. Lift, drop, lift, drop.
The warm air from the inside of the house whooshed out to greet her as she stepped up the front steps. Luca walked her down an entrance hall over to the side of a staircase. He pressed on one of the wainscoting panels, and it slid inward, exposing a dark hidden passage.

Rebekah grew up on both the east and west coasts and currently lives in the Los Angeles area. From the Giving Tree by Shel Silverstein to The Stand by Stephen King, Rebekah immersed herself in other people's made up worlds. She began writing in junior high and then found she liked pretending to be other people's characters in high school. Lettering in drama she went on to study theater in college as well. After college she continued acting till becoming a mom. Ultimately, she ended up going back to writing her characters down instead of acting them out, so she could stay at home with her kids.

Rebekah is a member of Romance Writers of America and is a board member of both the Fantasy, Futuristic, & Paranormal and her local Los Angeles chapters.  When she isn't spending time telling the lives of the characters constantly chattering inside her head, you can find her with her husband and four children; reading comic books, gaming, at the movies or taking care of the menagerie of pets. A dog, a rabbit, two bearded dragons, and three tortoises. Wonder woman, the escaped snake, has yet to be located.

Evaine, a struggling New York theater student, enters an unsanctioned drug trial in an effort to pay bills.  She awakens in a derelict hospital, chained to a bed with no memory of who she is, or how she got there.  A band of pale skinned men, led by the gorgeous Luca, burst in, whisking her away to safety.

Once at Haven House, Evaine is introduced to The Family. Like them, she has become A Deader, a reanimated Undead.

Luca is hell-bent on stopping the experimentations, and killing those responsible. He has no time for a Newborn who is struggling to control her rages, hunger, and powers. Nor does he have the desire to deal with the feelings she's awakening within him.

Despite their best efforts, Evaine and Luca find their connection intensifying when suddenly, she remembers not only who she is, but also her fiancé, Tristan; who is still looking for her.

Torn between her first love and her new heart’s desire, Evaine runs back to Tristan putting everyone in danger. When a rogue faction of Deaders, called Feeders, attempts to kidnap her, Luca suspects Evaine is the key to the experiments.

Can everyone band together to keep Evaine off the cutting table of those she escaped from? Or will second death tear her away from everyone, for good?

Available via Amazon, ARe, and other online retailers.