"Snatch Me" if you can, by Nara Malone.

Looking for the Birthday Blog Hop? We've got some awesome prizes! It's one article below ... but also enter to win Nara's $10 GC to Ellora's Cave. 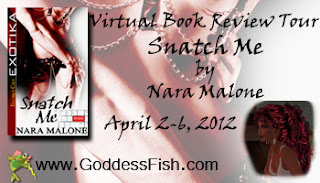 “This is not a place girls should go alone. It’s not a place girls should go together. It’s no place for a young woman in a denim miniskirt, a translucent white tank top, no bra, no panties. But that’s what I am and that’s what I’m wearing.”
And just like that, Nara Malone captures the reader’s interest with her quirky voice. Jolie goes venturing into an alternate reality world, Quarterz where female visitors come ready to be used.
In her real life, she meets Mack and quickly denounces him, placing him in a mental safe box not to get involved. What she does know is that Mack also controls much of Quarterz, and he’ll have to take his courtship to a virtual level.
There’s always the option of a “safe-out,” kind of like a get-out-of-jail free card. But with Jolie looking for a good time, it’s doubtful she’ll take it.  “Snatch Me” promises to offter a wild game, to the delight of many readers.

From the moment Jolie discovers the Quarterz, a virtual post-apocalyptic world for capture role-players, she can’t resist the challenge. She’s chosen a hard game, where sexual submission to a captor is expected, demanded, no quarter given. She uses the challenge to escape real life and feels a sense of kinship to a world like the Quarterz, a society too broken to fix.
Mack created the Quarterz and took a gamble when he secretly lured Jolie there. He suspects he and Jolie share sexual interests that neither can admit in person. Now he has to hope that time in the Quarterz can help Jolie cope as she struggles to rebuild her life. He has to stand back and allow her to find her way in a game where he’s not always the captor. But when the game is over, he’s determined to be the one who wins Jolie for real.
Excerpt:
The door, right in front of me now, popped open and I had a hand over my mouth and another arm around my waist before I could scream. In the little bit of light cast through the door I could see I’d dropped into some kind of torture chamber, complete with chains and stocks.

“You can make a bunch of noise and I’ll have to share you right here with the guys from upstairs, or you can stay quiet and I’ll beam us out of here to someplace more pleasant. Your choice.”
I went still. He dropped his hand. When I stayed quiet, he took that as assent and we launched into a sickening spin that I thought must be the way it felt to get sucked through a black hole.
We emerged on a dock. Going from solid to vapor and back again has the same effect on your brain as a shot of whiskey. I staggered when he let me go. His hand at my elbow steadied me enough that I could turn to get my first look at the face behind the powerful arms that had snatched me from the container. I recognized those steel-blue eyes, that superhero body instantly. I wondered if he remembered me.
“New girl,” he said. He said it like it was a chore.
It wasn’t a question so I didn’t answer.
“You know the rules?”
“You caught me. I’m yours to use, in whatever way you choose. When you’re done I’m free to go. Like fishing.”
“Fishing?”
“Catch and release.”
“That’s just about right. You missed one thing.”
I waited.
Snatch Me--Sex Bytes Exotika is available via Ellora's Cave: http://www.jasminejade.com/p-9476-snatch-me.aspx 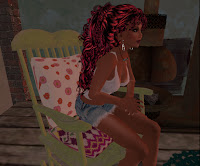 Nara Malone is an award winning novelist and poet. As a freelance journalist and writer, her feature profiles on women entrepreneurs and her romantic short stories have been published in newspapers, magazines, and digital publications.

Nara lives on a small farm in the shadow of the Blue Ridge Mountains. When she's not writing, she loves to run, hike, bike, and kayak. Every story she tells incorporates her love of animals, nature, and adventure.

You can contact her through Twitter, Face Book, or Yahoo mail. The user ID is nara_malone for all three.
Author Nara Malone - http://naramalone.com/
Facebook:  http://www.facebook.com/#!/pages/Nara-Malone-Author-Page/145054222179718
Twitter:  https://twitter.com/#!/nara_malone
Nara will be giving away a $10 Ellora’s Cave GC to one randomly drawn commenter during the tour.
Posted by Louisa Bacio at 1:44 AM