Getting into the Mind of My Characters with Carrie Ann Ryan

Carrie Ann Ryan guest blogs today, as I make my way out to the RT Convention in Chicago. Carrie Ann's offering a giveaway (information below) so make sure to leave a comment and your email address. I'll also be posting a review of Carrie Ann's new release shortly.
So some people say that authors have multiple personalities or have too many voices in their heads. Well…yeah they do.
Most of us write because we have to.
Because we need to quiet the voices in our heads.
Do I sound crazy yet? LOL
It’s odd isn’t it to think of getting in my characters minds, when most of the time they are in my mind and never shutting up! Most writers will tell you that they feel a bit crazy with the voices in their heads. I mean, we answer the voices, jot notes down, mumble to ourselves, go “Ah Ha!” loudly in public when a plot point comes together.
Writers are slightly crazy.
Nothing new there.
But how do we reverse that? How do we get in the minds of our characters?
Well, for me, I have to close my eyes and think about who my character is at that moment. In Trinity Bound, I have three characters, Josh, Hannah, and Reed. Each character is different and has a distinct voice in my head.
Reed is funny, caring, and yet is stronger than most. So when I need to get in this mind, I have music for him. He’s more of an alt rock guy for me. Even 80s rock. Something that makes me smile, yet lets my head bang at the music.
Hannah is soft and caring – and can kick ass. I usually have girl pop on for her. Like GaGa, Kelly Clarkson, Carrie Underwood…and then some Adele when Hannah’s in a dark place.
Josh. Yeah him. He’s tough, somewhat cold, strong, and can take care of his own. Oddly enough, when he’s on his own or sitting in a room and not fighting bad guys, I usually have Josh Turner on. I know, I know. But that deep croon helps me get in Josh’s head. But when he’s fighting the bad guys and protecting his own? Then it’s Nine Inch Nails.
Yeah. I’m a bit odd. But their personalities and the situations they’re in help me. Music helps me. Sitting in a room and closing my eyes and thinking about my characters reactions to each other help me.
But it gets me through to my characters so when they’re not yelling at me; I can actually hear what they are saying.
What about you? When you are reading, what do you do to get in the mind of your characters?
BLURB:

Hannah Lewis, a rare earth witch, is taken from the only life she’s ever known. Held against her will by a sadistic wolf, she almost gives up hope that she’d ever see her real life again. But as her fellow captive, a werewolf named Reed, tries to calm her fears, she begins to feel a spark of something she never thought she’d feel – love. But is Reed, alone, enough to get her out of this dark basement so she can move on with her life?
Reed Jamenson, the artist of a werewolf Pack of Alpha males, knows instinctually that Hannah is his mate. Thus, despite their imprisonment, he will do all to protect her and then worry about their hearts. But is he strong enough to find a way for both of them to escape? And why does he feel as though something else is missing?
Josh Kolb, an ex-military human, stumbles upon Reed and Hannah and finds he must trust this new world of supernatural beings to survive. But that desire will lead the three to a triangle of attraction that will test the boundaries they all possess and its consequences in defeating the enemy. Can they all trust one another to save themselves and life as they know it? Even at the cost of their own hearts?
~~~~~~~~~~~~~
Excerpt:
Hannah put her hand on Josh’s arm, a jolt of electricity flashing between the two. She gasped and he held back the urge to do the same. She gave him a smile and he desperately wanted to brush the curls from her face, soothing the bruises that couldn’t hide her radiant beauty. Reed crouched behind her, still protective. He too was beautiful, his chiseled cheekbones pronounced against the shadowed, healing bruises.
Crap. He could understand thinking sexy thoughts about Hannah, but since when did he think males were attractive in any way? Either that weird connection confused him, or he really was falling for Reed. He didn’t know which one, if either, he wanted to be true.
Reed bent over Hannah to whisper to them both. “Camera.”
“Don’t worry about them now. We have about ten more minutes and then we’d have to worry.”
They both looked curious with a similar tilt of their heads, but didn’t say anything, merely nodding.
“Who are you?” Reed whispered, leaning closer.
“Josh.” Why the hell did he say his name? He was never a name, just a presence, on any other mission.
Why did he want them to know his name? Know him? “I’m no one. Just a friend.”
“You’re human.” Hannah’s surprised gasp was still whispered.
AUTHOR Bio and Links: 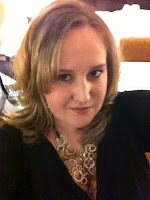 Carrie Ann Ryan is a paranormal and contemporary romance author. After spending too much time behind a lab bench, she decided to dive into the romance world and find her werewolf mate - even if its just in her books. Happy endings are always near - even if you have to get over the challenges of falling in love first.
Her first book, An Alpha's Path, is the first in her Redwood Pack series. She's also an avid reader and lover of romance and fiction novels. She love meeting new authors and new worlds. Any recommendations you have are appreciated. Carrie Ann lives in New England with her husband and two kittens.
Carrie Ann loves hearing from readers. You can find her at:
Website
Blog
Facebook Author Page
Facebook Friend
Goodreads
Twitter: @CarrieAnnRyan
Amazon: http://www.amazon.com/Trinity-Bound-Redwood-Pack-ebook/dp/B007PH8GU2/ref=sr_1_fkmr0_3?ie=UTF8&qid=1332971961&sr=8-3-fkmr0
Barnes&Noble: http://www.barnesandnoble.com/w/trinity-bound-carrie-ann-ryan/1109757830?ean=2940014145107&itm=1&usri=trinity+bound
ARe: http://www.allromanceebooks.com/product-trinitybound-751681-139.html
~~~~~~~~~~~~~
PRIZE INFORMATION
Carrie Ann will be giving away an autographed bookmark to one commenter at every stop, and a $25 Amazon.com gift certificate to one randomly drawn commenter and a $10 Amazon GC to the host with the most comments (excluding the host's and the author's).