The Villain Drives the Plot with Storm Grant

Storm's offering a contest. See below for details.
I first heard "The Villain Drives the Plot" from Dr. Cynthia Walker during her annual MediaWest writing workshop. I wrote it down. I thought about it a lot. It’s important.

Recently, Query Tracker posted a short and compelling article by author Danyelle Leafty on villains. Danyelle says:
♦  The villain sets the tone of the story.
♦  The villain sets the stakes.
♦  The villain defines the hero.
She gives some great examples of each. You can read the entire article, here.
She also says: No villain=no conflict=no plot=no point. At first I disagreed, but reading further, I realized what she meant. Now don’t make the mistake I did of thinking that all villains must be people or aliens or undead, etc. A villain can be the weather or an event or a natural disaster. As Leafty defines: “something, somewhere, needs to be working in opposition to the [protagonist], and that something is the villain.”
Lately, I've read a few romances and a lot of erotic romances with no external villain. Or indeed, no external conflict. That's hard to do. I usually find stories in which the only conflict is inner conflict weak and repetitive. Now there may be great examples out there of books without “villains” that are strong, but my thinking is, why not use ALL the tools in my writerly toolbox?
Even in a novella, why not have both internal AND external conflict? I'm tired of the "I want to be with him but I can't allow myself to for fill-in-the-blank reason." Why not have the internal conflict AND someone trying to foreclose your mortgage which won't matter if the river keeps rising but every time you try to build a levee, someone shoots at you? Raising the stakes, to me, does not mean repeating the reasons why they can’t be together with increasing hysteria.

I prefer to have a lot of villains. Harry Potter has not just Voldemort, but a lot of others who are either in league with Voldemort, or just live to give Harry a hard time, from Malfoy, to the Dursleys, to Rita Skeeter, to... even people who mean well get in his way. 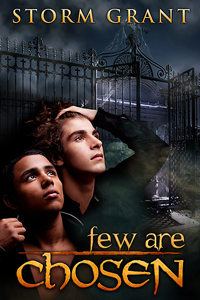 In my latest release, FEW ARE CHOSEN from Riptide Publishing, the villain is a dreaded reflux demon. It spits acid and breathes first and is generally unpleasant:
Its eyes bulged from its toad-like head, which swiveled about, searching for prey. I stepped further back into the shadows. It sniffed at the air, its noseless nostrils hairy and moist. Where its bare flesh poked out of its clothing, its pink skin rippled as if walnut-sized parasites roamed beneath it. It raised a giant ax. For a moment I thought the ax was its hand, until the clouds drifted aside and moonlight illuminated filthy clawed fingers wrapped around the ax handle.
The hero, Blake St. Blake, has trained his entire life for this, his first demonic confrontation. He sees the demon as the embodiment of evil. Yet, is Blake a reliable narrator? The demon tells him it’s come to Earth for:
I’m gonna get a cassse of Bud, and then sssome grossseriesss. And maybe a fffatted calfff. There’sss a butcher over on Missshigan that hasss really good beefff.” Its shoulders raised in what may have been a demonic shrug. “D’you know where there’sss a Wal-Mart around here?”
So to you and me, the readers, it’s a funny demon, possibly harmless (although we’ll see later that it isn’t.) To Blake, it must be slain.
So yes, Leafty’s definition is bang-on in this case. The villain does set the tone, the stakes, and defines the hero.
I’m about to start writing my first mystery. Oh, don’t worry. It’ll still be funny, and paranormal, but it’ll start with a murder and end with a satisfying conclusion (plus a sexy romance, of course.) So I’m researching how to write a mystery, and all the experts advise to start with the villain. What does he want? Why does he want it? What happened to him to make him that way?
So has Richard Castle says, “There are two kinds of folks who sit around thinking about how to kill people: psychopaths and mystery writers.” Maybe I’ll get to be “the kind that pays better.”
So long live the villain... unless he accidently succumbs to his own evol plans!
BLURB:
FEW ARE CHOSEN by Storm Grant
Sparks fly between virgin teenage demon hunters when the Chosen One turns out to be… the Chosen Two?
Apprentice warrior Blake St. Blake is the Chosen One, raised by an ancient order to defend the world against evil. Well, maybe not the whole world, but at least his neighborhood in downtown Detroit.
When a dreaded reflux demon is sighted in a local cemetery, Blake is sent off to his very first battle, armed with his sword, his super-senses, his black leather duster, and a few well-rehearsed one-liners.
But another Chosen One gets in Blake’s way—an apprentice wizard named Shadow. While the boys argue about who’s the more chosen of the two, the demon escapes.
Blake wants to be angry, but it turns out he and Shadow have a lot in common. Besides, Shadow’s pretty cute, and Blake can’t help but think that the wizard’s skills (and hands and lips and other bits) might make the perfect complement to his. Blake and Shadow are brave enough to challenge the reflux demon in a second battle, but will they have the courage to tell each other how they feel?
Title Details
Publisher: Riptide Publishing
ISBN: 978-1-937551-22-3
eBook release: Feb 20 2012
eBook formats: pdf, mobi, html, epub
Word count: ~12,000
Page count: ~40
Heat Wave: On-screen, mildly explicit love scenes
Type: Standalone
eBook             $2.99
http://riptidepublishing.com/titles/few-are-chosen
- - - - - - - - -
Storm Grant Bio: Storm Grant is a writer of short and long tales, her work spanning both genres and genders. Storm's stories offer titillation and merriment, and in a few cases, horror. In the last few years, she’s published with MLR, Torquere, Phaze, Blood Bound Books, eXessica, Amber Quill, and Riptide Publishing.
Storm Grant (also writing as Gina X. Grant)
Email / Website / Blog / Twitter / Facebook / Goodreads
Contest:
Play The Name Game for FEW ARE CHOSEN and win a copy of ALL THREE of these entertaining books from Storm Grant’s backlist: Gym Dandy, Shift Happens, and Tart and Soul. (Two full-length novels and a novella!)
1. What is Shadow’s real first name? ___  ___  ___  ___
2. What is Shadow’s mentor’s first name? ___  ___  ___  ___  ___
3. What is the name of the Order that raised and trained Blake? The Order of the ___  ___  ___  ___
How to enter: DO NOT POST YOUR ANSWERS! Instead, to qualify:
1. Email your answers to the three questions, above, to storm.grant@gmail.com.
2.  Then post a comment to this blog stating that you’ve emailed your entry.
You may enter once for each stop on the blog tour, thereby increasing your chances of being the grand prize winner!
One grand prize winner will be selected March 5.
Blog tour, details here.