There’s nothing yummier than a hot guy on a cold night. I for one wouldn’t mind curling up with Rhys, the hero in my new release, Shield of Fire. He’s gorgeous, and protects humans from demons. Add the fact that he’s over 300 years old and you’ve got yourself a wholelota experience, if you know what I mean. (wink—wink, elbow to the ribs) 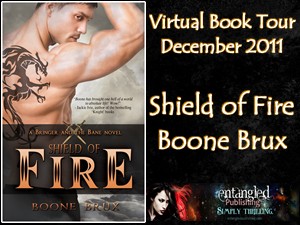 Rhys has baggage, but not the debilitating kind. I’ll leave that for Icarus, my luscious and deadly demon. Being the last full-blooded Bringer has given Rhys a hero complex, which keeps him distanced from the ladies. Well, until he meets Ravyn. I won’t say their soul mates, but they certainly clicked.
Always trying to be a gentleman, Rhys is pushed to the limit by Ravyn’s antics. How much is one man supposed to take? Especially from a woman who is a lot like him. You can’t blame Rhys for hoping Ravyn is also a full-blooded Bringer, somebody he could love, fight demons and possibly grow old with. He’s a romantic at heart and in the case of Ravyn, he falls hard. (But not in a whimpy—I want to crush his skull kind of way).
I’d like to share bit from chapter seventeen. Usually I don’t give excerpts from this part of the book. You know, the whole give the milk away for free concept, but I’m feeling generous today.
He slid down her body and once again settled on his knees. Determination to pleasure her swelled. His fingers spread her lips and Ravyn opened to him. Encouraging. Trusting.
He tongued and teased her back to her euphoric state. The beast roared for its mate, and Rhys struggled not to give into the demands he so desperately wanted to surrender to.
Ravyn pushed against his tongue, wanting more of what he gave her. He felt her body tighten. His hands caressed the inside of her thighs and his tongue lapped and drank her in. She burrowed her fingers into his hair and bucked against his mouth. Sweet Sainted Ones, he’d never wanted to pleasure a woman as he did now.
Sorry, just a tease. I’ll say this, Rhys and Ravyn are just getting started. Hope you enjoyed it.

Protecting humans is the Bringers’ duty. Sending demons to the Shadow World is their pleasure.
In one night, Ravyn’s life plunges from barely tolerable to deadly. Forced to flee the only home she’s known, she stumbles headlong into the clutches of Icarus, a powerful demon intent on stealing her powers. Unfortunately for him, she has no intention of cooperating.
When Rhys realizes the woman he’s rescued from the Bane Demon is no mere human, his obligation as a Bringer dictates he protect and train her in the ways of his people. But he’s unprepared for the intense desire he feels for the fiery Ravyn. To surrender to his need may mean her death.
As the Demon King’s desire for ultimate power escalates, fathers are slated against sons, and foes are made allies. The Bane threat upon them, Rhys and Ravyn must quest to unite the last of the Bringers—and explore a passion too powerful to ignore.
Purchase Link: http://www.entangledpublishing.com/shield-of-fire/
About Boone
Boone has lived in the beautiful state of Alaska for nearly two decades. She spent many of those years in the bush, where the internet and flush toilets were a luxury. Boone’s motto? “Have laptop, will travel.” It’s not uncommon to see her pounding away at her computer during camping trips, fishing expeditions, or in their family plane as they fly over the open tundra.
She’s won several awards for her writing and serves as the Alaska Chapter president for Romance Writers of America.
www.boonebrux.com
www.twitter.com/boonebrux
www.facebook.com/boonebrux
Posted by Louisa Bacio at 5:00 AM