When a miracle becomes deadly, who can save them? #vampires by @LinneaAlexis 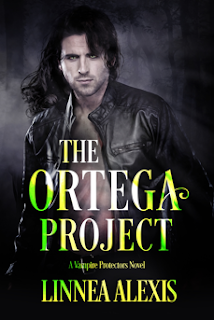 An epic love story of vampires and poison, innocence and ancient enmities, and the one impossible person who could redeem or destroy them all.

Vampires have started dying, poisoned along the Ortega Highway, so Roman Santos, their warrior leader, joins forces with a maverick scientist to develop a blood substitute. But when the formula turns out not only to sustain vampires, but to humanize them, it leaves Santos and his elite team of fighters vulnerable to inter-vampire power battles, attack by priest-slayers, and to love.

Recently dumped by her fiancé, Grace Raines is vulnerable too. Working to put her life as a graduate student back on track, she’s already unwittingly involved in the vampires’ dark world, even before the strikingly handsome Roman walks into the bar where she works.

As what began as a rebellious affair with an alluring stranger grows into something deeper, Grace and Roman struggle to keep the secrets of their worlds from destroying their hope for a life together, even as Grace is pursued by priests, slayers, and other vampires, and Roman battles the poison his once-saving formula has become, rebellion within his team, and his own nature. As death closes in from too many sides, can Roman find a way to keep the destruction of his world from the one who might save him?

Linnea Alexis stopped stirring up trouble in the corporate world a few years ago and now satisfies her appetite for adventure by writing about second chances. She writes Contemporary Romance, Romantic Suspense, Paranormal, and Historical Romance where flawed heroes and heroines find their Happily Ever After.
Contact Details:

Enjoy the following excerpt for The Ortega Project:

Discipline and focus were Roman’s strongest assets. But tonight, he struggled to keep his mind on the upcoming kill. His thoughts trailed off to Grace and the sexual debacle he’d created by being called away. Twice. Once near her car in the parking lot when he kissed her goodnight. The latest—tonight from her bed. Both times she’d been ready for him. She probably thinks I’m having an affair with my damn cell phone. He released a low snarl and his grip tightened on the steering wheel.
“You okay?” Gabriel asked.


“Yeah.” After disappointing Grace a second time, Roman knew he’d have to work extra hard to get her to even speak to him again. He’d always dreamed of sharing his life with a good woman. A woman like Grace. He couldn’t let her get away and would beg, if he had to, for another chance to claim her.
Posted by Louisa Bacio at 12:22 PM