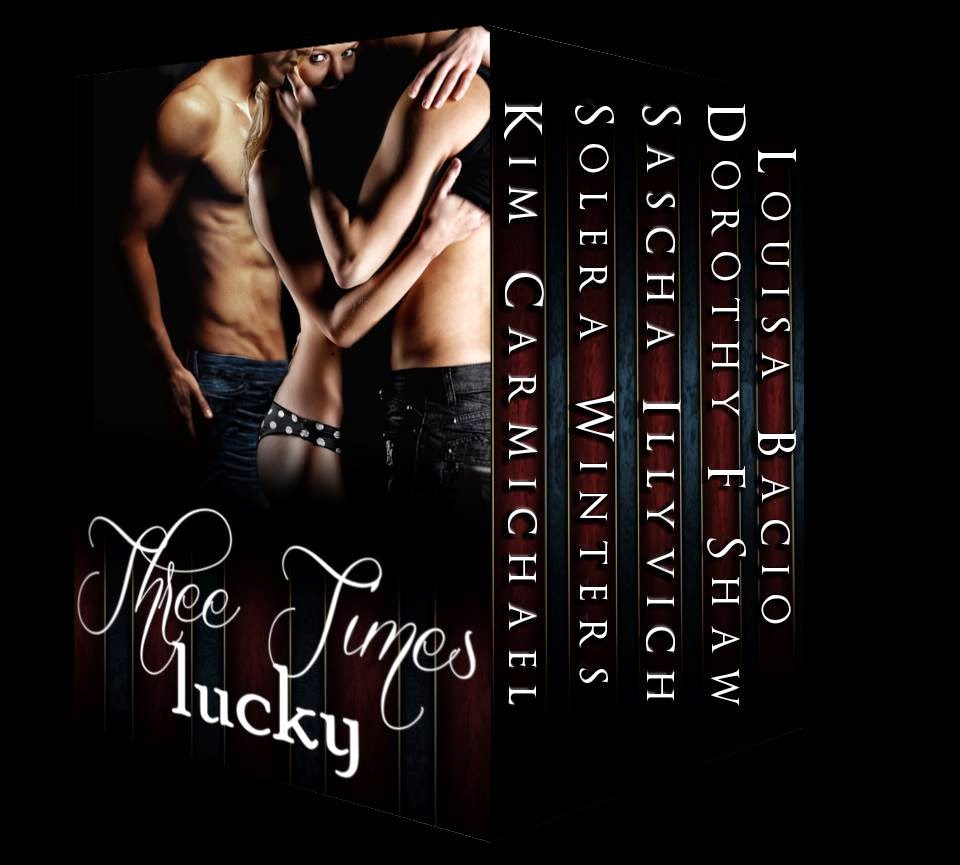 Sometimes it takes three to get lucky in love!

Three Times Lucky Box Set
Three is never a crowd in this alluring boxed set of ménage stories from five of today's hottest authors. From Sci-fi adventures, to Greek Gods, to erotic vampires, to contemporary tales, these sexy shorts prove sometimes it takes three to get lucky in love.
Featuring Stories
Made For Two by Kim Carmichael
Since the day she rescued her Earthlings, Trevini of Mersenne, has tried and failed to get her two males to lower their inhibitions and bring them together in the traditional triad of her planet. Though fighting their own attraction not only to Trevini, but to each other, all astronauts Markov Gauss and Pell Perrin want is for the beautiful alien who saved them is to choose between them. However, after almost losing her life, Trevini must somehow convince Markov and Pell that she is made for two.
Darkest Dreams by Solera Winters
The darkest hour holds the hope of light.  While Nyx loves her husband, Kiernan, she knows something is missing. When sexy Reve comes on the scene will it split them apart, or create more passion than they've ever known? In 'Darkest Dreams,' Solera Winters presents a ménage tale about the Greek gods of night, darkness and dreams.
A Perfect Fit by Sascha Illyvich
Will Ivanka realize the truth of being in a triad or will her fear of ultimate rejection hold her back from total happiness?
Playtime by Dorothy F. Shaw
High-powered executive, Dana Richards can’t seem to get enough of his favorite exotic dancers at the Red Panther Gentleman’s Club. RayAnne and Kyra are the feature act; putting on a vampire performance you can sink your teeth into—complete with fangs, and the sexual lure only a creature of the night can offer. But when Kyra makes Dana a proposition he can’t refuse, some intimate playtime, the arrogant executive gets more than he bargained for: The sex of his life. Plus two, undeniably real vampires.
Ménage By Monday by Louisa Bacio

Available now: The Thief & His Master

Feeling stuck, Sven drops out of college for an enticing job. Although the want ad mentions “discipline,” he doesn’t expect to find magic in the hands of his potential boss.
Sven’s world shifts to a new reality. He’ll battle danger and his destiny to find his true calling, and love.