Later this week, I'll be attending the GayRomLit Retreat in Albuquerque, New Mexico. In perfect timing, I'm hosting one of my OCC/RWA chapter mates Lex Valentine. 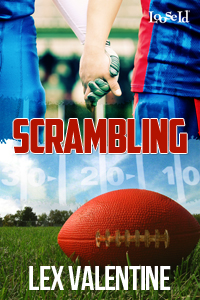 I don’t know if you ever wondered what it would be like if players, coaches and owners came out of the closet while they were still active with the team. I sure have. My wondering led to writing and a series of three novels came to life in my head. The series, Out in the NFL, became an obsession for me. I read articles about athletes in the big five leagues who didn’t come out until after their careers were over. And I’m pretty sure there are players whose careers are over but they still haven’t come out.

I don’t know what the fear is for athletes. Loss of endorsements? Loss of respect on the field or court? What could be worse than hiding who you really are for the better part of (or in some cases all of) your life? Hiding sucks. Lying sucks. Not being free sucks.

Most people say the reason is simple fear. Unfortunately, I think we all can relate to simple fear. Fear of the unknown. We’ve all experienced it. We’ve all been embarrassed by it when our fears turned out to be without merit or given much more credence than the situation warranted. And it’s this kind of fear that drives my two main characters.

Evan and Reed are not afraid to come out to the public. What they are afraid of is something deeper and more intrinsic to their natures. They are afraid of losing each other. They’ve been friends since they were six. They’ve done everything together. When, as teens, they each discover the true nature of their sexuality, fear raises its ugly head.

Each boy is afraid of what his best friend will say or think if he admits to being gay. Remember, these are football players. These kids hear the derogatory remarks regarding gays on a daily basis in the locker room and at school. Each boy is afraid if he comes out to best friend, he will lose him. And this childish fear, once given fertile ground to grow in, becomes the biggest fear of their life…losing their best friend.

At eighteen when they finally do come out to each other, one is in a budding relationship with an older boy. You don’t tell someone who is in a relationship with someone else that you love them. So the other issue they each have been carrying within them is left in the closet so to speak. They love each other, but cannot divulge that emotion for fear of losing the most important person in their life, their best friend.

For years these two men hide this very important emotion from each other. Simple fear keeps them from telling the truth. Simple fear compounded by their personal issues, the fact that they are gay and out in the NFL and the fact that they each have hidden this secret for a long time. The monster under their beds has grown to enormous proportions over the years. And then finally, it happens. The truth comes out. Instead of destroying a friendship, the best case scenario occurs and the two men end up together.

It has a HEA. After all the angst in this book, they surely deserved it. For all those people out there who would like to bang together the heads of these two characters, it doesn’t matter. They would still have been just as stubborn and afraid. Only on this one topic were they ever silent with each other. When they finally tell the truth, they realize how childish those fears were but in the moment, faced with losing the most important person in their world, they cave in to their fears and play it safe, zipping their lips.

Now, you have a little background on my guys. So I’m going to post a nice excerpt, a link to the trailer and some buy links. Hoepfully, this background I’ve given you will help you understand my poor misguided football players.

Thank you for coming by and thanks to Louisa for having me here today!

Blurb:
Evan McAdam has two constants in his life--football and his friendship with Reed Matthews. From the age of six, Evan's played football alongside Reed. In his teens, he realized he was gay and loved Reed, but fear kept him from confiding his deepest emotions to his best friend.

When he and Reed are drafted to the L.A. Stars, Evan decides to come out. His decision impacts Reed who's been in the closet too. The two men struggle with secrets of unrequited love while facing the world as the first two openly gay NFL players.

When injury forces Evan to retire, the love he bears Reed can no longer be hidden. But will Reed be able to reciprocate, or will Evan lose both football and the man he's always loved?

Reed held his breath and watched the play of emotion across Evan’s face. He probably shouldn’t have been so blatant about what he needed, but he couldn’t stop himself. All he could think about was that Len lay dying and it could so easily have been him had he ever given in to Len’s whining about his use of condoms. Right now, he needed Evan to make him feel alive, to chase away the specter of death and disease. He needed to feel whole, and only Evan could give that to him.

Evan’s voice quivered a little, and Reed could feel the tension in his friend’s body. He could also sense an underlying current of fear in Evan’s voice although he had no idea what Evan could fear.

There. He’d said it aloud. All his hopes and dreams since he was fifteen years old, laid out for Evan in words of one syllable. No mistaking them for anything except what they were, a blatant invitation for Evan to fuck him. He opened his mouth and made the invitation even more clear, the words driven by the emotion he’d held so long inside.

Reed poked Evan’s chest with a finger when he said you and his own when he said me. Evan blinked and shook his head as if he were dazed. “I-I don’t understand. Where is this coming from?” he asked with a frown.

“It’s coming from deep inside me, Ev. Whenever something is wrong, you’re there for me and vice versa, although God knows it’s usually me with problems not you,” he said with a tinge of bitterness at the life destiny had given him. “This time, I need more than just hand-holding. Will you give it to me?”
He stared at the man he’d loved since they were kids. The man he’d shared everything with. The one he couldn’t imagine his life without. And he willed Evan to say yes.

A long, soft breath escaped Evan, tension leaving his big body. “Yes. You know I love you. I could never say no to anything you ever asked of me.”

Reed pushed himself against Evan’s chest, his hands coming up to frame the handsome, beloved face of his best friend. “Then just love me. Death is cold. I need to be warm.” He pressed his mouth to Evan’s, and a pleasure like none he’d ever experienced exploded inside him.

Evan’s lips were soft and warm, gentle in a way Reed hadn’t known men could be. He took control of the kiss, took control of Reed, his hands and his mouth leading Reed to ecstasy. Their tongues slid together, tentative in the way of new lovers but without urgency or fear, just a growing awareness and heat. Evan’s hands slipped over Reed’s shoulders and down his back, causing a slow burn in Reed’s veins.

The limo turned a corner, and they rocked, swaying with the movement of the car. Reed pulled his mouth from Evan’s, and they stared at each other, breathing hard.

“Are you sure? I don’t want to push you into something you don’t want,” he asked as pain threatened. He needed Evan, but he could walk away if Evan didn’t want him.

The big man pushed a trembling hand through his sandy hair. “I want it,” he replied, reaching for Reed’s hand. He pulled it toward him and pressed it into his lap.

Beneath his fingers, Reed could feel the hard ridge of Evan’s erection, and his heart sang in triumph.

The evidence of Evan’s desire was enough for him tonight. He didn’t need to own Evan’s heart although he yearned to.