Lust After Death with Daisy Harris

Daisy will be awarding a $20 gift certificate to Amazon or Barnes & Noble and a Walking Dead T-Shirt to a randomly drawn commenter during the tour (US & Canada Only). 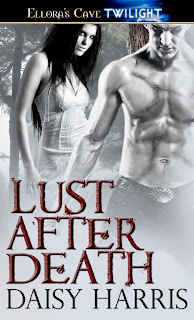 In the Pacific Northwest, where life hurries to keep pace with technology, a re-animated bride named Josie struggles to escape her creator and to find her identity in the half-erased circuitry of her mind and body.

Assassin Bane Connor just wants to get the girl to the Zombie Underground and receive his payoff-a mental reset that will erase his memories as well as his guilt. But an attack by a rival faction derails his rescue, and the wide-eyed female whose circuitry requires a husband tears at his hardened heart and ignites desire like he's never known.

Drizzling rain filled the air as Josie clamored up the trail after Bane. Her feet swam in the rain boots he’d given her and she considered that he hadn’t really thought through this plan very well in not bringing her clothes from Adam’s house.

The path curved up a hill, through tall trees whose branches overlapped and wide-spanning trunks that dropped leaves the size of her head.

He hitched his backpack higher on his shoulders and cinched the waistband tighter on his hips. The move drew her attention to the way the smooth and stretchy material of his trousers hung from his behind. Her fingers tingled to reach out and pinch the bunched muscles of his buttocks.

That brief glimpse of his thoughts echoed in her mind. Clearly he hadn’t meant to do her harm and now that the shock faded, she observed it from a different angle. Josie wondered at the snippet, curious about where it might have led.

She ran her hands through the brush that rose around her. Each branch was filled with droplets. Spikes pricked on some plants, others felt smooth. One felt soft and downy at first, then stung her curious fingers and Josie pulled her hand to her chest. Her legs ached as they summited the hilltop.

Bane led her a small ways down the other side and he pointed to a small clearing. “It won’t be the softest night’s sleep. But I’m so dead on my feet I won’t care.”

Josie cocked her head to the side and noticed the way his body slumped forward and his feet dragged. “This’ll be fine.”

Birkenstock-wearing glamour girl and mother of two by immaculate conception, Daisy Harris still isn't sure if she writes erotica. Her romances start out innocently enough. However, her characters behave like complete sluts. Much to Miss Harris's dismay the sex tends to get completely out of hand.

She writes about fantastical creatures and about young men getting their freak on, and she's never missed an episode of The Walking Dead. 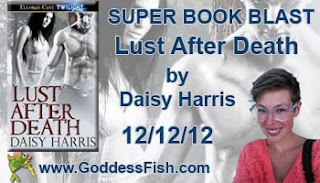